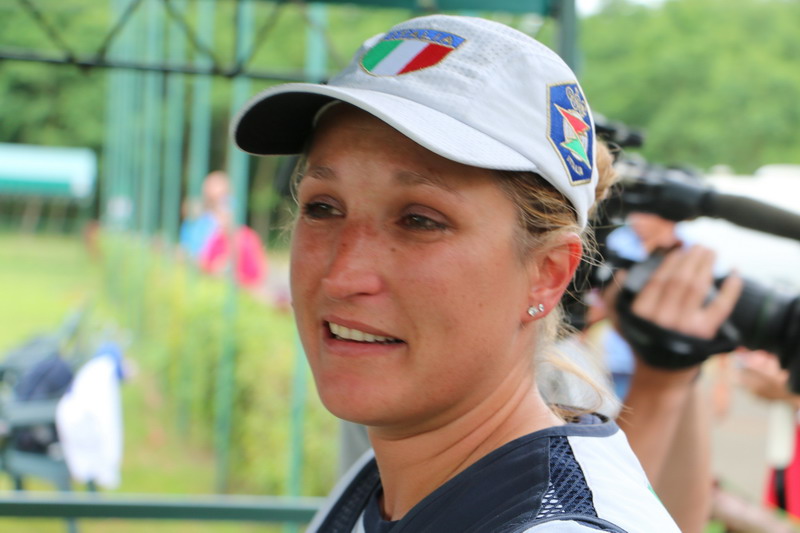 We can say honestly that Chiara Caneiro (ITA) has won two gold medals this year, because she has delivered a baby five month ago and now she won her European Championship in skeet women in Sarlóspuszta.

“The finals were quite hard while there was not a lot of light, but it was a little bit difficult for me to see the targets. This was my fourth European Championship but this time it was very special because I had that sweet baby. I have been running and trying to practice morning and sometimes also in the afternoon, but of course it is more challenging now”, explained “mother Chiara. “The next competition for me is World Championship, before that I practice and spend time with my baby. Other things can wait”, told delighted Chiara Caneiro.

In semi-finals Chiara Caneiro made excellent work and missed only one target (15). She was clearly the best athlete and reached her place for finals. Nearly as perfect as Caneiro shot also French Veronique Girardet, her result was one target less (14) than Caneiro’s. To the bronze match reached place the winner of Qualification Slovakian Danka Bartekova and Panagiota Andreou from Cyprus with the result of 12 targets.

In the bronze match Andreou started nervously and missed the first of two target and once in the next target pair while Bartekova made perfect shots. Bartekova missed the 12th target but it was the only one. So bronze medal went to Slovakian Danka Bartekova with the result of 15. Anderou’s result was 14.

The gold match was a battle of two excellent athletes: Veronique Girardet(FRA) and Chiara Caneiro (ITA). Both of them hit the targets one after one, then both missed one in the sixth pair and then Girardet also one in the next pair. The end was only perfect shots for both and Chiara won the European Championship.

“I’m so happy that I could win”, explained Caneiro tears of joy in her eyes.