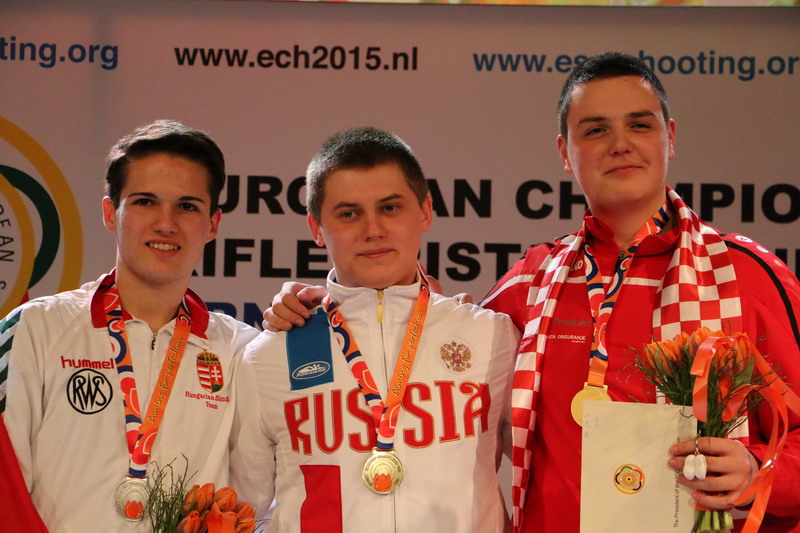 - I try to do only a good and right shot. I tried to make maximal score and not anything else. I have trained and started shooting in 2008. I practiced a lot, and that’s the reason why I made such a fine result today, - explained new Final record holder.

To the question “how much” the master only answered: “A lot”!

- Our Air Rifle Men team is also so strong, and it is very difficult to get into the team while they are so good, and that is why I have to practice a lot. Of course I would like to aim to Rio but let’s see what will happen, but 2020 is not a problem, - smiled Fetisov and looked at his coach.

- My goals? Well, my goal is a maximal result with every shot and this result must be as high as possible.

The Fetisov’s winning result was 208.7, and it is a new Final European Junior Record. The silver medal winner was Istvan Peni with the result of 205.4. He competed with Croatian Borna Petanjek trough the competition and finally managed to pass him.

- I used to watch to the result all the time, and I knew the situation all the time, and that is why I tried to reach 10,9 more than once in the end. I’m training twice a day; in the morning I have breathing and aiming practices or physical training, in the evening I’m training shooting. Well, today I managed to shoot 10,9 only once, and I am very happy for it, and I can see results of hard training, - explained silver medalist Peni, whose silver result was 205,4.

Borna Petanjek from Croatia won the bronze medal. His result was 183,4.

Gold for Russia in Team competition

The Team competition was also the show of Russian Federation. They won gold with the difference of 10,1 point before Italy. The winning result was 1858,6 and the team consisted of Vladimir Fetisov (623,0), Anton Korotkikh (619,5) and Evegeniy Ischenko (616,1).