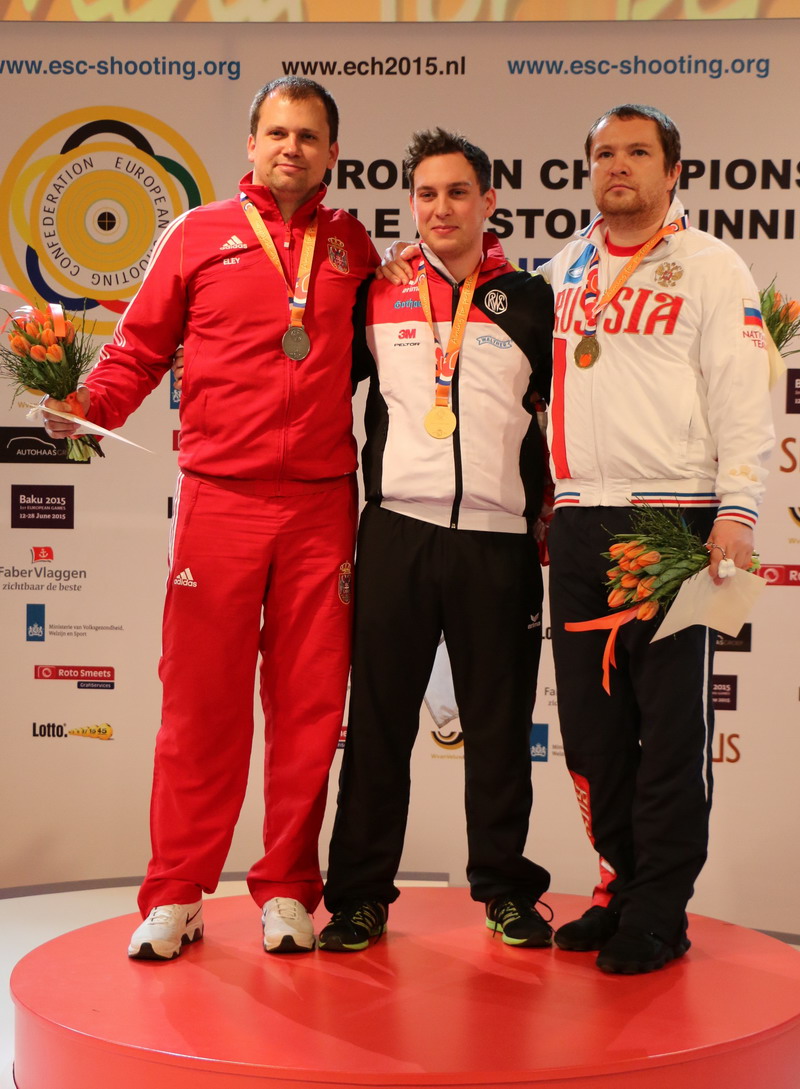 If Thursday was a day of domination of the Russian Federation, so was Friday the domination day of Germany in Air Rifle Women and Air Pistol Men. In the first final of today German Women Rifle athletes ruled in the personal competition and the men athletes the ladies example.

It was also the day of rookies, while the winner in the Air Pistol Men event was for the first time in senior competition with result of gold medal. The young German Philipp Grimm ruled the last part of the final even superiorly. He won the European Champion with the difference of 4.9 points before Serbian Damir Mikec. The golden result was 199.8.

Grimm has improved his results from last year very much, but he said that “nothing has changed in my training, but I’ll concentrate now better and try to keep my thoughts in my doing”.

- In the beginning of the finals I was quite nervous. It was the same also in the Qualification, but I calmed down after every shot. I tried to do perfect shots and to do my best. In the end I was ever so nervous and I thought that I had done so good job, I have to think only about that shoot and to do it quickly so you can win the gold medal, and all the feelings and excitement came over me after the last shot. The feeling was crazy, - explained the young Grimm.

- I had a plan that I don’t want to be the 8th in the finals and to do all the time all my best what I can do. Then, somewhere in the middle, I recognized that the plan would work and I tried to continue to do my best, - explained Philipp Grimm after the awarding ceremony.

The battle for silver medal was hard between Serbian Damir Mikec and Russian Anton Gournianov. Gournianov was leading Mikec 0.9 points but the two following shot stopped his way – he shot 9.8 and 8.5 when Mikec had 9.2 and 10.2. So the bronze went to Anton Gournianov and silver - to Damir Mikec.

The Team competition was not so clear while the best two teams (Germany and Russian Federation) had the same score 1736, but the Germany had more inner tens (69) than the Russian Team (61). The German team consisted of Florian Schmidt (578), Philipp Grimm (579) and Manuel Heilgemeier (579). The bronze medal team was Serbia with the result of 1729.

Armenia, Finland, Ukraine and Sweden for gold in Running Target

In the Team competition the best team was Ukraine who won gold with the difference of 38 points before Finland. The winner of bronze was the Russian Federation. The Ukrainian golden team consisted of Volodymyr Strutskyi (548), Dmytro Melnyk (571) and Ihor Kizyma (571).

In the 10m Running Target Mixed Men Emil Martinsson was the most skilful and won gold while all the three best had to have shoot off with the result of 385. Emil Martinsson won the shoot off (20), Hungarian Laszlo Boros (19) won silver and Tomi-Pekka Heikkilä (18) won bronze.

The team competition of RT Mixed Men was a triumph of Finland. The Finnish team won gold with the result of 1140.The team consisted of Krister Holmberg (377), Heikki Lähdekorpi (378) and Tomi-Pekka Heikkilä (385). Russian Federation won silver and Czech Republic won bronze.

In the Running Target Women Junior Competition Armenian Lit Mkrtcyan had the honor to step on the highest podium after winning Hungarian Veronica Major in the golden match 6-4. In the bronze medal match German Nina Danner beat French Florence Louis 6-2.

In the RT Mixed Women the best was Irina Izalkova (381), Olga Stepanova won silver (374) and Anne Weigel was the winner of bronze medal (368).