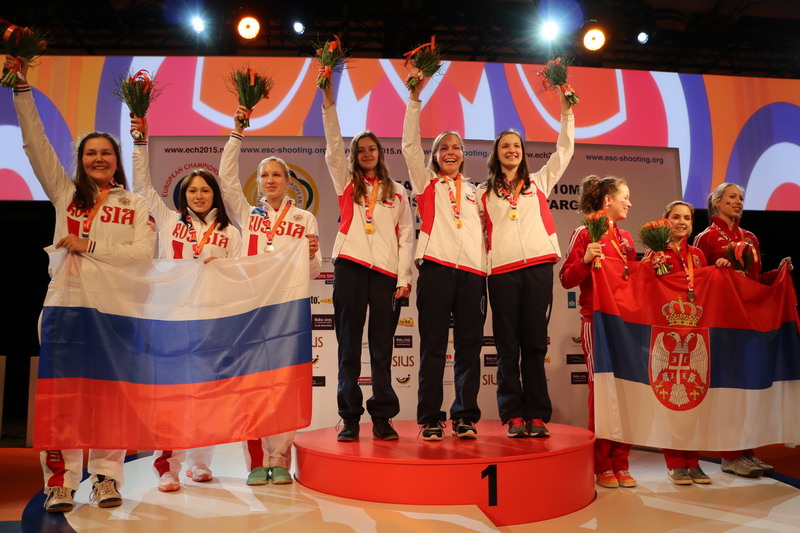 The first days of the Championship are reserved for Junior athletes. The Young athletes presented their best and we can say that they really made it in an excellent way. And I’m sure that there’s also one reason: fine finals hall and the supporting atmosphere which athletes received from the audience. These issues will give extra efforts for athletes.

The first final on the Athens Arena was the 10m Pistol Men Junior competition.

- I know I’m in good shape. I knew what I had to do, that was my job. And I did what I was planned to, - told the new Pistol Men Junior European Champion Russian Artem Chernousov with serious expression on his face.

And he didn’t lie. His shooting was so sure that it can be even described like train running on the rails. After the first six shots he took the lead and didn’t give that position to change. The difference was nearest only 0,1 point between Latvian Lauris Strautmanis while Chernousov shot 8 in the 14th shot. But after that the rest was triumph of young Artem Chernousov. The winning result was 198,7.

- I was very nervous all the time in the competition as usual. The range is fantastic to shoot, but I couldn’t do this time better. Artem Chernousov earned honestly his gold, - said tall silver medalist Lauris Strautmanis from Latvia. The silver result of Strautmanis was 195,2.

The bronze medal winner was Georgios Gabierakis from Greece.

- This was my second time in European Championship. Usually it is not so often to see Greek pistol shooter on the podium and that is why I’m very proud about this bronze, - told Georgios Gabierakis with smile on his face.

The 10m Air Rifle Women Juniors ended with the shoot off

The 10m Air Rifle Women Juniors was the best sport drama that you ever can have. There were several first timers on the shooting line but also athletes to whom competing in Championships is familiar. The youngest athlete was Hungarian Lailita Gaspar, only 14 years old.

Seonaid McIntosh shot very strongly and hold the leading position nearly to the end but with a small difference. On the 15th shot Hungairian Gasparain took the lead by shooting 10,5 when McIntosh shot 10,2. After the next shot McIntosh took the lead again by an excellent 10,8 hit when Gaspar managed to shoot 10,2. It looked like that the game was over. McIntosh was leading in that time 0,4 points. But as usual in the sport you have to try your best in the end. 18th shot: Gaspar shot quickly 10,7 and earned huge applauses, the concentration disappeared from McIntosh for a while and the result was 9,9. Two last shot still to shoot:

Lailita Gaspar thought that she had lost the gold after her last shot and started to put her air rifle on the table. She was ever so surprised when the announcer told that the will be shoot off. The results of both athletes were 207.

The first time in European Championship and golden result for 14 years old Lalita Gaspar! What can we wait from her in the future?

- I have started shooting in 2014, our coach told me that you are really a talent, please continue. While my results were good it encouraged me, but I couldn’t imagine that I could be an European Champion immediately. Of course I have been dreamed of this. Well in the future I’ll aim to the Olympics and want to be an Olympic Gold medalist, - told shy Champion. It looked like that she was still a little bit surprised by winning gold.

- I’m very happy to win silver. Of course I tried to win gold, but I’ll do it next time. It was marvelous to compete in this kind of arena. Everything was perfect as their slogan is telling. I was a little bit nervous even this was my fourth European Championship. I tried to my best but it happened what happened, - told Seonaid McIntosh and continued that she has to practice more if she will be the Olympic Champion sometime.

The best of Running Target Women Grand Prix was the Russian Irina Izmalkova.