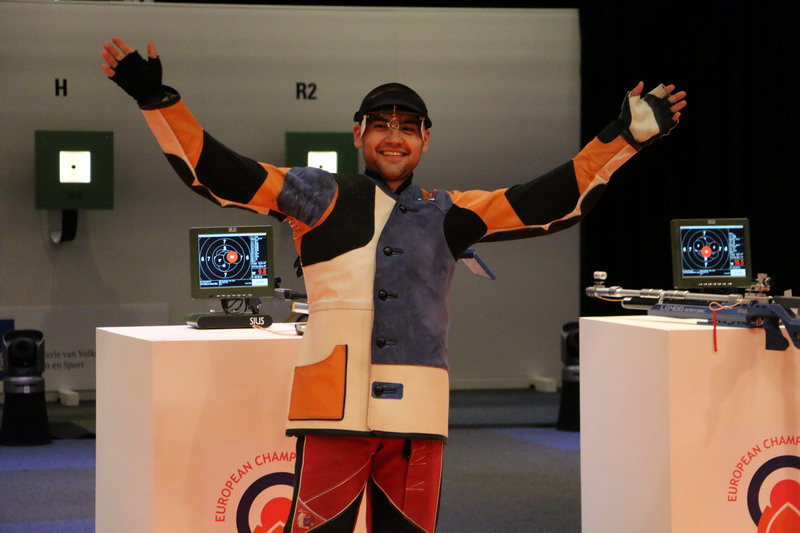 The Air Rifle Men was full of excitement. At end it was a duel between Italian Niccolo Campriani and Bulgarian Anton Rizov. Rizov made a very strong shooting during the whole competition, but the drama writer was Niccolo Campriani, who secretly arose to the battle for gold during the four last shots. He shot 10.5, 10.8 and 10.3, and suddenly he was leading before the last shot. But, as we have so often have seen, the game is over only when all shots have been performed. So it happened also this time.

Rizov performed his last shot his last shot before Campriani with the result of 9.8. The audience shouted and what shall Campriaini do? Everyone stared the score board, and suddenly the result 8.9. Rizov won gold!

- It was so heavy and exciting. I have been participated already seven times in the Championships, and I should know, what and how to do, but I was so nervous today. It was Niccolo’s misfortune and my fortune this time. Wow, it is amazing to win my first European Championship gold! Sorry, I have to go now to give my doping test and hurry, while I have still the AIR 50 competition, - shouted Rizov and entered to the Doping room.

There was also drama in the Qualification, when Hungarian Peter Sidi, one of the favorites, was disqualified according to the ISSF Rule 7.5.5.2 “Additional fastening of trousers”.

The Russian team showed its strength in the Team competition

The Air Rifle Men team golden crown was given to the Team of the Russian Federation with the result of 1873.4. The team consisted of Nazar Louginets (619.3), Sergey Kruglov (626.5) and Vladimir Maslennikov (627.6). The Russian team won European Championship with the difference of 3.5 before Italy (1869.9). The bronze medal winner in Team competition was Belarus (1867.7).