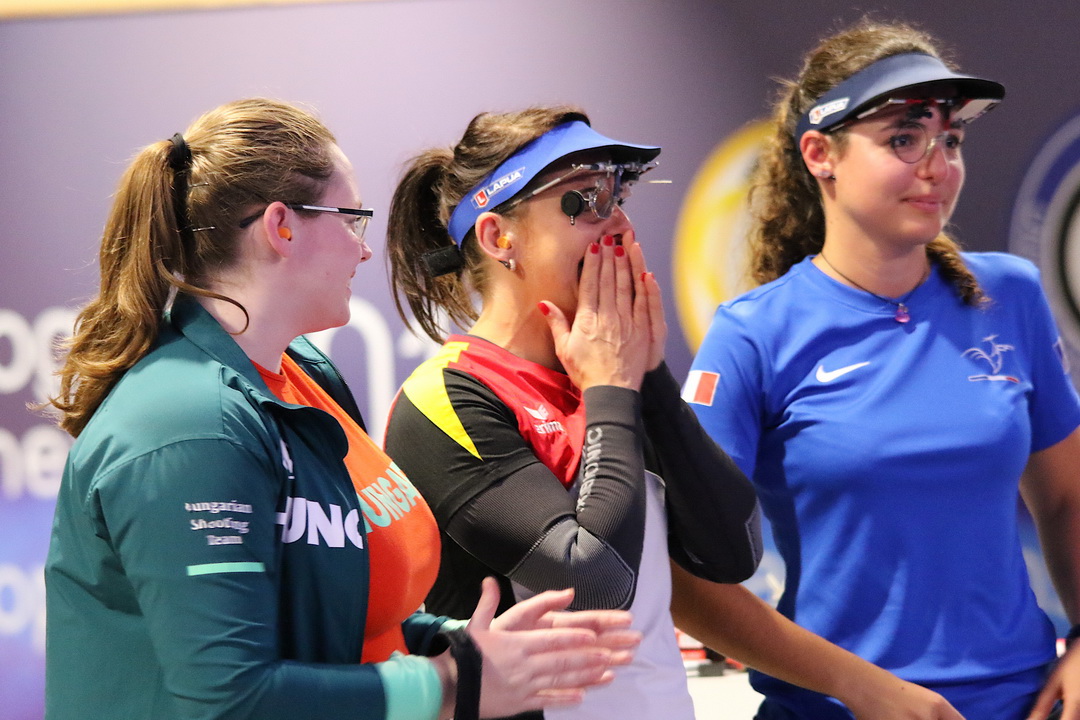 In 25m Pistol Women Anna Korakaki (295) on top place, but German Monika Karsch and Doreen Vennekamp were breathing only one point behind (294) Korakaki. After the second stand Vennekamp was the best in Qualification (591), Korakaki and Karsch now 1 point behind Vennekamp. The best result of the Rapid stage made Hungarian Veronika Major who shot 299! The other four for final were French Celine Goberville, German Heidi Diethelm Gerber, French Mathilde Lamoille and Hungarian Zsofia Csonka.

The name of today was German Monika Karsch who won the European Championship. She won finally Hungarian Veronika Major with 4 point (37-34). Major made a marvelous job to climb up to battle of victory. When there were still three series left, both athletes made 5 hits. Karsch was leading then 30-28. During the last two series Karsch managed to add her difference with two hits and Major couldn’t answer to Karsch’s attack.

Karsch was crowned as a European Champion. The bronze was won by the French Mathilde Lamolle who made a marvelous job behind Karsch and Major. She climbed up step by step and won finally bronze.

Germany for in 25m Pistol Women

In 25m Rapid Fire Pistol Men after the qualification French Clement Bessaguet was leading with result 588 (295+293) before German Christian Reitz 587 (294+293) and Ukrainian Pavlo Korostylov was third with result 585 (293+292). Russian Nikita Sukhanov, Italian Riccardo Mazzetti and Ruslan Lunev from Azerbaijan were the next to the final.

Reitz start was strong in the first series: 5 points and it looked that he will handle the final. He was leading still when there were three series to shoot, situation 22-21. The Italian Riccardo started his finish. Both athletes had shot 5 hits, but then Mazzetti got his flow and the audience was wildly encouraging him. Mazzetti made during three series 13 hits when Reitz only 9. Game was over and Italian Mazzeti was the new European Champion. Bronze was won by Russian Nikita Sukhanov.