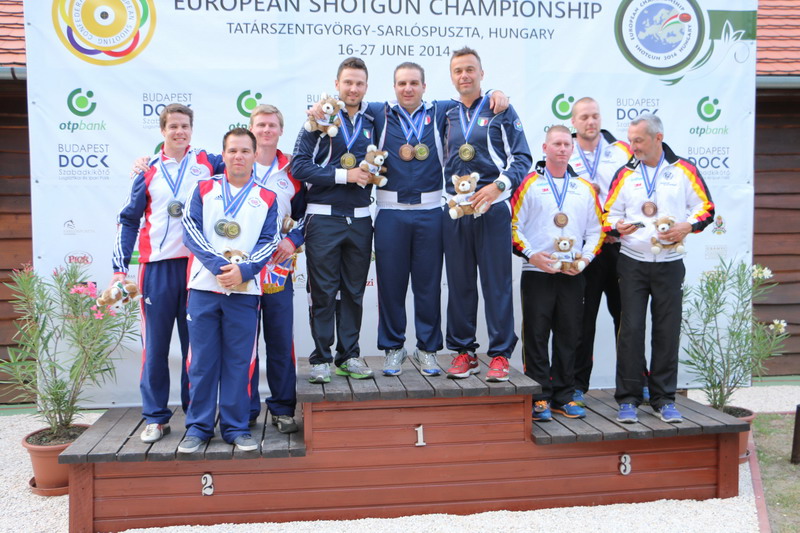 The European Shotgun Championship continued on Sunday 22nd June with Double Trap men junior competition. In the team competition the Italian team was superior and won the European Championship with a difference of 11 targets. The gold result was 416. Silver medal winner was Great Britain with the result of 405. Bronze medal winner was Germany (399) before hosting country Hungary who lost the bronze with three targets. The team Italy consisted of Marco Innocenti (143), Davide Gasparini (137) and Daniele Di Spigno.

Nearly as superior as the Italian team was also their athlete Marco Innocenti when he won the Qualification of Men Double Trap with result of 143. The result was excellent while the weather was windy and the direction of the wind changed all the time. Innocenti beat British Steven Scott (140) with three targets. The two other athletes, who reached the final place directly, were Russian Vasily Mosin (139) and Hubert Olejnik (138) from Slovakia. The two last final places were solved by the shoot off. Andreas Loew (137+2) (GER), Vitaly Fookev (RUS) (137+2) took the places for finals and Davide Gasparini (ITA) (137+1) was the first who dropped out from the finals.

If the team of Italy was superior, Russia was more superior in the Men Junior Team competition when they won. They beat Great Britain with seventeen targets. The Russian winning result was 404, Great Britain – 387 and bronze result from Italy was 380. The team of Russian Federation consisted of Kiril Fookev (139), Anton Slepushkin (137) and Viacheslav Yukhimenko (128).