The first day of trap 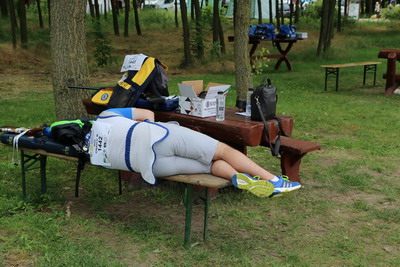 Four Men Shot 50 at the first day of Trap

After 50 clays in the lead of Trap men is Yiannis Ailiotis from Cyprus. He had a perfect day by shooting in both set 25+25. Unfortunately he was not the only one who made the full scores while there were three other men with the same result. These are Derek Burnett (IRL), Massimo Fabbrizi (ITA) and Anton Glasnovic from Croatia. Six other athletes reached 49 clays. So everything is of course not yet clear. Men will shoot tomorrow 50 clays and the last 25 and finals will be competed on Friday (20th June). From the title of European Champion there are totally 83 athletes competing and 23 teams in team competition.

At the team competition Italy is leading after the first day with the difference of 3 clays before Poland (143). The Italian team consists of Massimo Fabbrizi (50), Giovanni Pellielo (49) and Mauro De Filippis (47). At the third place is now team of Spain with the result of 142. Turkey, Croatia and Great Britain are the next following teams with the result 140.

At the trap junior men competition there are three juniors with the same result 48. They are Michal Slaika (SVK), David Barquero (ESP) and Viktor Veretin from the Russian Federation. After the first day team of Slovakia is leading in the junior men team competition with result 140 and with the difference of 2 clays is Czech Republic (138). At the third position in intermediate results is Italy with result of 136.

German Katrin Quooss is at the lead

German Katrin Quooss took the lead at the trap women competition after the first day with result 49 (24+25). Just one clay behind (48) there is three ladies breathing and hunting the final place. These three are Zuzana Stefecekova (SVK), Deborah Gelisio (ITA), Chritiane Coehring (GER). Abbey Burton (GBR)is one clay behind with result 47. Three clays behind (46) Quooss there are nine athletes, among the Olympic winner Jessica Rossi (ITA) and Satu Mäkelä-Nummela (FIN). Tomorrow women will shoot the last 25 clays plus finals.

Spain has the leading situation in team competition with the result 138. Just one clay behind is Germany (137) who leads Italy (135) with two clay .

In Junior women competition Italian Alessia Iezzi and Russian Yulia Tugolukova are leading with same result of 48. At third place (46) there is Serdag Kandira from Turkey.