The Russian athletes dominated also the rest of the day 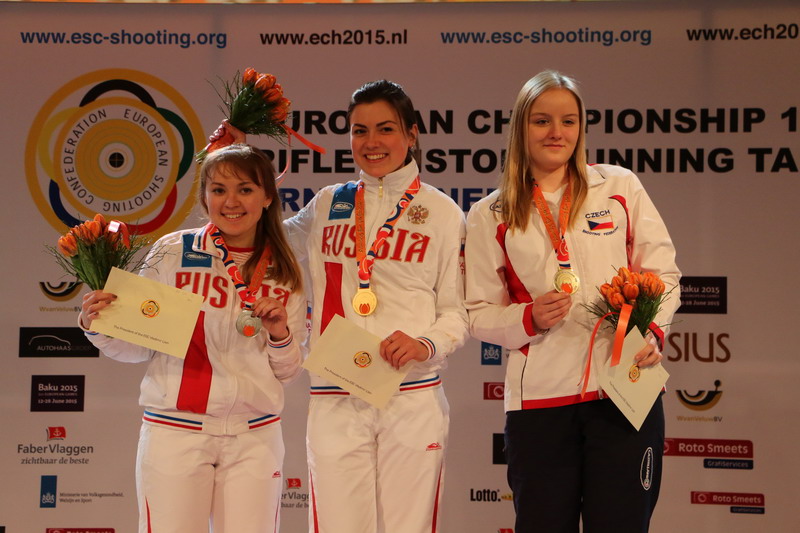 We can honestly say that the 2nd competition day was the triumph of the Russian athletes. They dominated in the Air Pistol Women Junior and in the Air Rifle Men Junior. And that was not all. They also won the team competitions and also the Air 50 Pistol and Rifle Junior competitions. The first final of the day was victorious for Vladislav Fetisov, and for the young Russian female pistol athletes it was also the golden way.

While the day started with the domination of Russia, it also continued the same way. When the 2nd day came to its end, athletes of the Russian Federation, in a manner of speaking, cleaned the table.

The Air Pistol Women ended with the double victory of the Russian athletes. The gold medal winner was Margarita Lomova with the result of 200.8 before her team mate Regina Rizvanova whose final result was 200.0.

But, as usual, the game is over when the last bullet has been shot. Lomova managed to do it better in the last two shots. Lomova’s 19th shot was 10.2 when Rizvanova’s – 9.8. Both athletes finished the competition with excellent hits: Lomova nearly a perfect one – 10.8. and Rizvanova – 10.6.

The bronze medal winner was Czech Anna Dedova with the result of 175.2.

- I have trained a lot. I’m very happy at the moment. I have been waiting for this for such a long time. This is my first European gold medal. I was on the silver podium in Youth Olympics last year. I have trained a lot and my second goal is to win some day the Olympic gold of course. I’m training for that a lot. My program includes running, dancing, Thai boxing and of course shooting. All these skills will help me to control my body better, - told the 2015 Pistol Women Junior European Champion.

The team competition was of course the triumph of Team Russia after the double winning. The winning result was 1121, and the team consisted of Regina Rizvanova (380), Margarita Lomova (377) and Daria Lopatina (364).

Two last competitions of the 2nd day were the Air 50 Rifle Junior and Air 50 Pistol Junior. In these two competitions team are consisted of one female and one male shooter. This competition will have also the semifinals and in the end – medal matches. In medal matches the winning team must have first five points. The team whose overall result is better, receives one point.

The both Air 50 were the triumph of Russian Federation’s teams. In the Air 50 Rifle Junior the gold was won by the Ekaterina Parshukova and Vladislav Fetisov. They beat Italy 2 in the gold match 5-4. In the bonze match Germany beat Italy 1 with the result of 5-3.