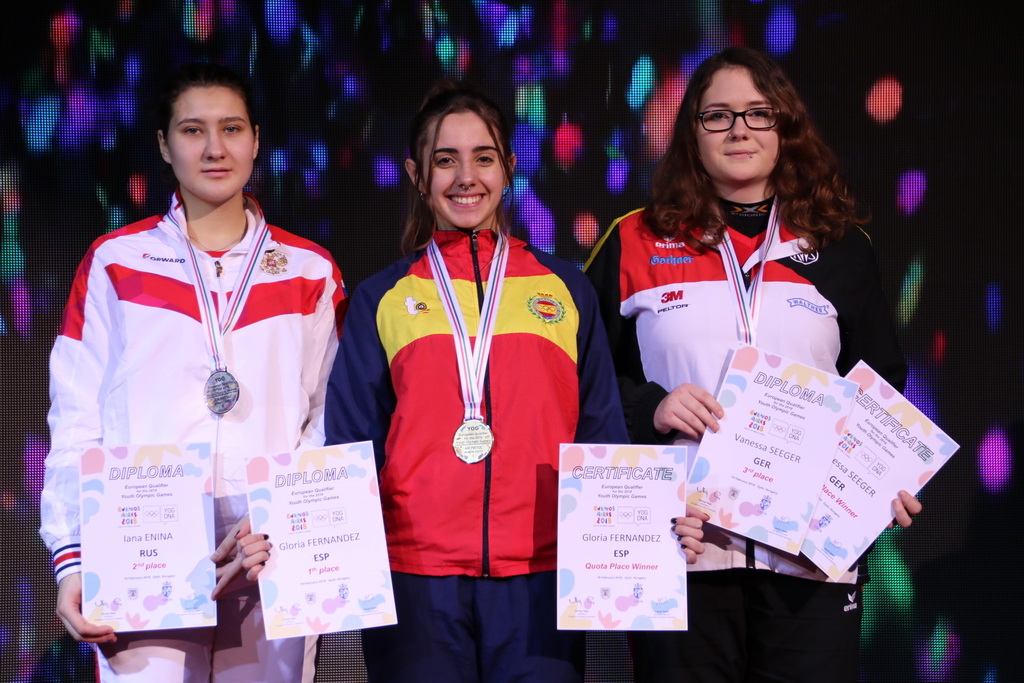 Györ woke up a little bit misty, landscape have changed his color to white. It had snowed a little bit during the night, temperature – 3 C only. Traffic on the street was surprisingly active. Audi Aréna woke up quickly, when athletes and coaches rushed to their rooms and range.

The first competition was 10m Air Pistol Women Youth with 53 participants. Their goal was to win one quota of three quota place to Buenos Aires Argentina for the Youth Olympic Games. After the qualification eight best athletes reached the place to the finals. Best in qualification was Italian Giulia Campostrini with the result of 381. Only one point (380) lost Russian Iana Enina. Third finalist was Vanessa Seeger two points (378) behind Enina. Slovenian Anja Prezelj was fourth with the same result (377) with Spanish Gloria Fernandez. The three last finalists were Romainian Daria-Olimpia Haristiade with two Georgians: Nino Khutsiberidze and Lizi Kiladze. These three athletes shot the same 374 result.

Gloria’s name was like an omen while 17 year young collected the largest glory in the 10m Air Pistol Women Youth Competition. She won gold medal and also at the same time a quota place to the Youth Olympic Games.

Gloria Fernandez was fifth in the qualification and she was not at all satisfied to her shooting.

"That was terrible shooting, but I was very satisfied that I could reach the final place", told the winner.

In the finals young Spanish athlete managed much better. She was all the time among the four best – mainly among the two best behind Russian Iana Enina. When sixteen shots had been done Fernandez moved to lead with the difference of 0.2 points by shooting 10.7 – 10.0 – 10.4. Those hits led her to the triumph while Enina could not defend her leading. Enina’s shots were 9.9 and two times 9.4. Fernandez took the top place and she kept that place to the end.

"This was my first time at the international competition and also my first final that’s why it was so exciting. I have trained shooting now for four years and the future plans are a little bit unclear still. Of course I will compete still here in this championship and let’s see what will happen. I was and I’m still very excited and it is a little bit difficult to understand this entire", explained gold winner after the awarding ceremony.

The final was good shooting and Fernandez told to much more satisfy with her actions as in qualifications.

"I tried to stay calm whole final. I knew that I can shoot well and I was proud for myself when I believed all the time my doing and when I passed Enina I said to myself that I have all the skills to win if I continue same way", cheered young Gloria.