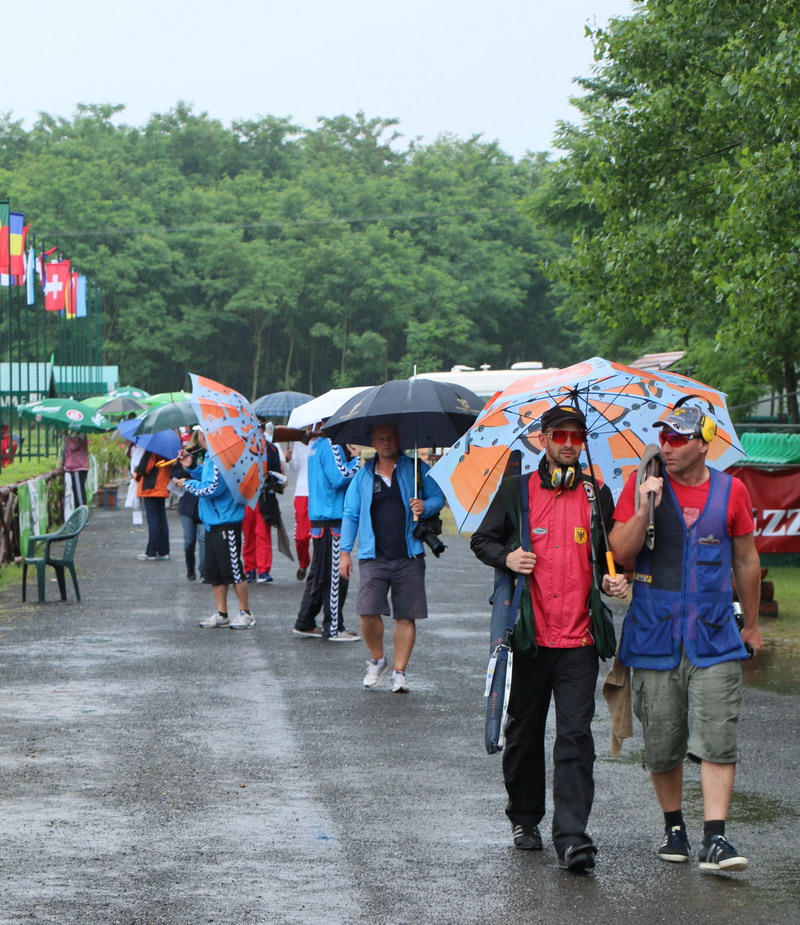 In outdoor sport the weather conditions can surprise the athletes in a dramatic way. That happened in Sarlóspuszta today when skeet shooting started. But if you are trained well it does not disturb you. It could be seen when the rough rain surprised the athletes about noon. It looked like somebody had broken the water pipes in heaven. It was raining cats and dogs. In spite of the huge rain there were seen excellent sport performances.

In the skeet men competition there are four men who have made the perfect 50 result. These are Jesper Hansen (DEN), Ralf Buchheim (GER), Valeriy Shomin (RUS) and Fabio Ramaella (SUI). After these four follow seven athletes who are only one target behind leaders. In the team competition Cyprus (146) is leading after the first day with a difference of one target before Germany (145). Italy is the third with the result of 145. In skeet men there are 74 athletes and 17 teams.

In the men juniors competitions Gabriele Rossetti (ITA) and Nicolas Vasiliou have hit 49 (both 25+24) targets and they are leading after 50 targets. Behind these two are four athletes who have reached the result of 48, and 7 athletes who have hit 47 targets.

In the team competition Cyprus has taken the leading place with the result of 144. Teams of Czech Republic and Germany have 140 targets each.

Dana Bartekova is leading the skeet women competition with the result of 49 (25+24). One target behind her is Albina Charikova (RUS) (48). Charikova has one target more than four following athletes: Chiara Cainero (ITA), Therese Lundqvist (SWE), Veronique Girardet (FRA) and Diana Bakosi (ITA). These four have hit 47 targets.

In women team competition Slovakia (141) won Italy with two targets (139) and third is Great Britain with the result of 136.

Tomorrow (Wednesday) will be the second day of skeet where all shoot 25 targets, and women and women junior have their finals. Quoting Finnish Skeet coach Peeter Päkk, tomorrow will be very difficult and there will be changes in the result list. Let’s see how right he is. The weather forecast promise rain for tomorrow.