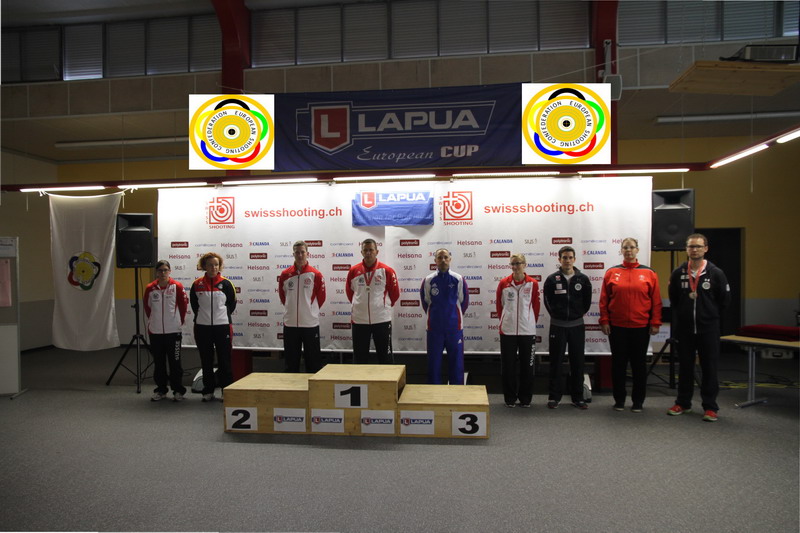 2014 Lapua European Cup has culminated with the Final in Winterthur, Switzerland, on October 9-12. During the season there were three qualification rounds organized in Zagreb (Croatia), Lahti (Finland) and Aarhus (Denmark) with a total of 286 starts. There were another 92 starts in the Final that gathered 46 participants (17 women and 29 men) from 11 countries: Austria, France, Finland, Estonia, Denmark, Hungary, Germany, Great Britain, Slovenia, Sweden and Switzerland.

In 300m Rifle Prone Men the best result - 597 - was achieved by Claude-Alain Delley from Switzerland. Second was Stefan Raser from Austria, third - Valerian Sauveplane from France.

The 300m Rifle 3 Position Men was won by Cyrill Graff from France (1179) who equaled the European record in this event. Graff was followed by Peter Sidi from Hungary and Robert Markoja from Slovenia.

In competitions among women Charlotte Jakobsen from Denmark placed first in 300m Rifle Prone (598). Eva Roesken from Germany had the second result, Catherine Houlmont from France - the third.

The last event of the Final was unofficial Super Cup with 6 men and 4 women competing for the victory. It could be expected that like in 2013 Ciryll Graff would finish on top of the ranking. But he was only third. It was Marcel Buerge who claimed the overall success. In the shoot-off he was a little more precise than Claude-Alain Delley.