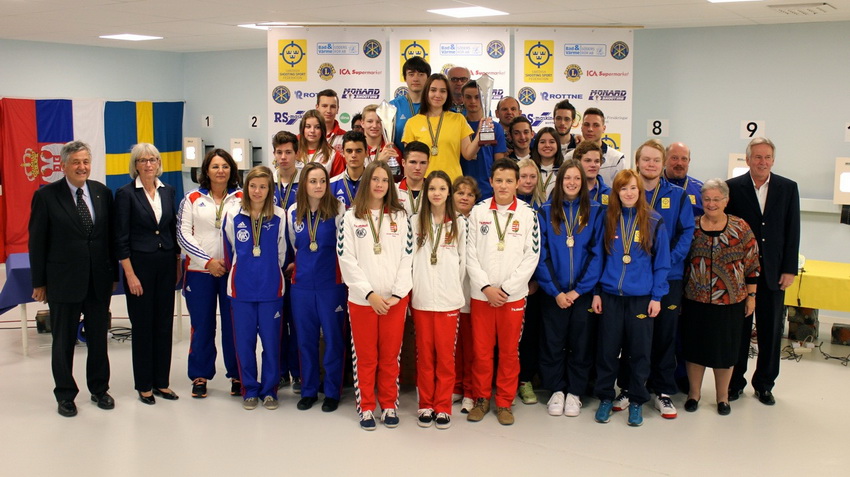 The Final of the European Youth League closed on Sunday after a weekend of excellent performance by young athletes from all over Europe. 57 athletes and their coaches from 15 different countries had gathered in Rottne/Växjö in the south of Sweden to fight for the medals and trophies. Söraby Shooting Club with 114 years of shooting tradition welcomed the shooting family in the brand-new range and offered excellent organization and warm hospitality.

Since the beginning of the year young athletes all over Europe have qualified in two steps to enter the prestigious EYL Final. In the Air Rifle event the participants came from Austria, Croatia, Finland, France, Hungary, Norway, Serbia and the host federation Sweden. The Air Pistol competitors came from Czech Republic, Italy, Latvia, Lithuania, Poland, Switzerland, Ukraine and the host country Sweden.

The EYL is a mixed team competition, a fight head to head for the 3 team members. The teams must be composed of both genders and the competitors are 14-18 years of the age. This time there were 25 girls and 32 boys participating out of the 57 athletes. After the first days of competition in 2 groups on Friday and Saturday with 3 matches for each team the 4 best teams qualified for the bronze and gold matches on Sunday.

The pistol teams of Ukraine and Switzerland won all qualification matches in Group 1 and 2 respectively and so met in the Gold Medal match on Sunday. Here the team of Ukraine was outstanding and secured the victory with 74 match points against 46 for Switzerland.

The Bronze Medal match on the other hand was an open competition until the very last shots. Here Italy won with the smallest possible margin of 2 points with 61 match points ahead of Poland with 59.

The rifle competition offered almost the same scenario. Hungary and France won all of the matches in their respective groups and met in the Gold Medal match on Sunday. Here the Hungarian young athletes showed their excellence and won with 78 match points against 42 for France.

The Nordic battle between the teams from Norway and the host federation Sweden offered highest excitement with the lead changing during the whole match. Finally the Swedish team could secure the bronze medals with 62 match points against 58 for Norway.

In addition to the EYL Medals the teams entering the podium also received a specially designed hand made glass souvenir offered by the Organizing Committee. The ESC challenge trophies will now stay in Ukraine and Hungary respectively till the EYL Final 2016. The teams on the podium also received the special gifts from the ESC President Mr Vladimir Lisin in the form of 1-2-3 SIUS Hybridescore targets for the teams placing 3-2-1.

The ESC is extending its warm gratitude to Söraby Shooting Club Shooting and the Swedish Shooting Sport Federation for the excellent conduct of the Final. We would also like to thank the young athletes and their coaches for great performance in the spirit of friendship and fair play.

The ESC welcomes all European Federations to the EYL 2016 that will end with the Finals taking place in Bologna in Italy.