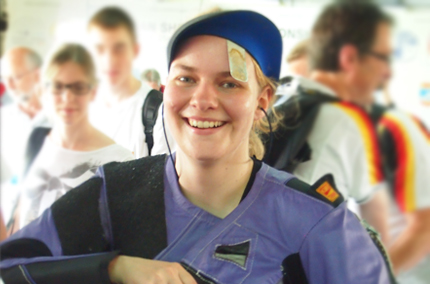 After the qualification of 50m Rifle 3 Positions Women you could feel how the mercury was rising. There was a certain reason for that. An athlete of the hosting country had just received the best result in the qualification.

After the kneeling position the French Laurence Brieze was leading with the difference of only 0,3 points from the German Amelie Kleinmanns. The Croatian Snjezana Pejcic was on the sixth place. When the athletes had shot the prone position Kleinmanns took the top position with the result of 308,4 points, the Serbian Ivana Maksimovic was second with the result of 304,7 points and the Hungarian Veres was only 0,1 point behind her. Pejcic was at the fifth place.

When the elimination started Kleinmanns was still leading but only with the 0,3 point difference from the Croatian Pejcic, who had shot excellently.

During the last elimination Kleinmanns gave no chances to her rivals and won finally with 2,3 points. The Serbian Maksimovic won the bronze with the score of 440,0 points. The silver medal was the first medal of Croatia - the Organizer of the Championship - and party was ready to start.

-        Huh that was hard, I was’nt sure about the result before I heard the last result. I was excited but I could concentrate well enough on the last shots. This was my “adult” final at the European Championship and that is why it was some way exciting. My next goal is the World Champioship in Granada 2014 and of course I will try to receive a quota place for Rio Olympic Games, but it is still a distant prospect. First I’ll try to win a place in the team going to Granada, - said the reassured gold medallist Kleinmanns.

The Czech Rebublic won the team competition only with one point (1737) difference from France (1736). Switzerland became the winner of the bronze (1730).