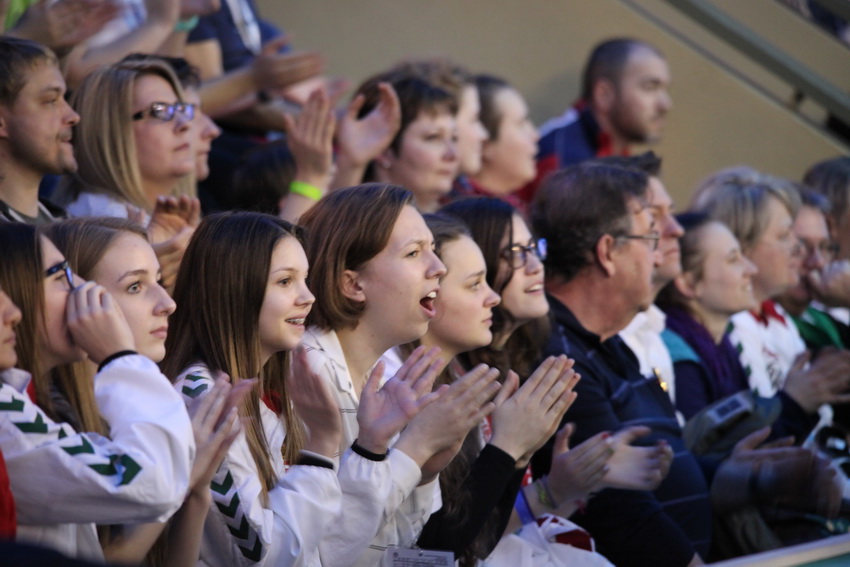 The culmination of the third day of competitions at the 2016 European Championship in Györ were competitions in two Olympic events - 10 Air Rifle Women and 10m Air Pistol Men. Andrea Arsovic from Serbia and Yusuf Dikec from Turkey won the gold medals. Six Olympic Quota places found their owners on Friday evening in the overcrowded Audi Arena in Györ.

The 10 m Air Rifle was the most popular competition in the European Championship in Györ. In this event there were 96 participants, from whom 8 qualified into the final. This was also the first of the three finals where athletes tried to achieve an Olympic quota place for Rio. Among the eight finalists there were four athletes who did not yet have achieved quotas, but there was only three quotas left. These athletes were Hungarian Juliana Miskolczi, Croatian Tanja Perec, Ziva Dvorsak from Slovenia and Petra Lustenberger from Switzerland. All the finalists were experienced athletes in spite of Swiss Lustenberger to whom this final was first European Championship final.

Some way the story of this final game was clear quite well from the beginning. The gold medal would be duel Norwegian Marlin Westerheim and Serbian Andrea Arsovic. These two athletes kept the leading position all the time. In the beginning Werterheim ruled, but during the 13th shot Arsovic and Westerheim, they were even. After 14th shot Arsovic finally passed the Norwegian, but only with the difference of 0.1 point. The lead of Arsovic changed between 0.6 points to 0.1. What a thriller. Weinheimer tried to attack during the last shots but it was not enough powerful and Arsovic won Westerheim with a difference of 1.1 points. The winning result of Arsovic was 207.7 and the silver medalist reached 206.6.

The Olympic quota places were solved after eight shots when the first athlete will be drop out. This athlete was unfortunately Ziva Dvorsak from Slovenia. The three quota places achieved Jaulianna Miskolczi; HUN (7.), Tanja Perec CRO (6) and finally Petra Lustenberger (3) who won bronze with the result 185.5.

Hungary continued again excellent performance after yesterday double gold and won the third gold during two days. The winning result of the Hungarian team in the team competition was 1247.6. The team consisted of Lalita Gaspar (414.1), Julianna Misskolczi (418.2) and Kata Zwickl-Veres (415.3). The winner of silver medal was Russian Federation (1244,9) with the difference of 2.3 points of team Germany.

Among the eight finalists there were only three athletes who have not yet managed to win an Olympic Quota place before and they all received it without any extra push while there were three last quotas also in this event. Notwithstanding the battle of quotas the final served exciting elements for the spectators while the athletes competed of honor and European Championship. That is real sport! The winner of the final was experienced Ysuf Dikec from Turkey. Behind Dikec the battle of silver and bronze medals was harder while there were athletes who were multi medalists and had really good merits. The only one who has not yet won any medals in European Championship was Pablo Carrera from Spain. Even he hadn’t have succeeded to win any ECH medal, he did it today with a style. He lost gold medal only with the difference of 0.9 points (197.6). Not bad at all! The European Championship result of Mr. Dikec was 198.5. The winner of bronze medal was Ukrainian Pavlo Korostylov (178.4). Those who won the quotas were Miklos Tatrai (HUN), Tsotne Machavariani (GEO), Wojciech Knapik (POL).

In the team competition the best country and gold medal team was Russian Federation with result of 1735. The Russian Team consisted of very experienced athletes: Vladimir Gontcharov (579), Vladimir Isakov (578) and Anton Gourianov (578). The silver medal travelled to the neighborhood country Ukraine (1724) who won Serbia with the same result but the Ukrainian team shot 55 inner tens than Serbian team 46.

Dmitry Romanov took his position on the top of 10m Running Target Mixed Men after winning Gold Match in the European Championship in Györ. Russian Federation had achieved two athletes into the Medal Matches, Dmitry Romanov and Maxim Stepanov. In the semi-semifinal these two team friends met each other. It was a battle of two giants of Running Target. After seven shots Stapanov was leading clearly 5-2 and the match looked to be clear. But it wasn’t. The old slogan was again true that the match is over when the last shot has been competed. Romanov won next two shots, 5-4. Then both shot 10.3 – no points from that. Next shot again for Romanov 5-5, Stepanov attacked once again and won the next shot. Situation for Stepanov 6-5. Romanov tried to attack and managed to win the last two shots and that’s it. Game over: Romanov for the Gold match! Stepanov – to Bronze match.

In the second semi-final met Swedish Jesper Nyberg who is a new face on the international level and experienced Lukasz Czapla. Their match had three levels. Czapla ruled in the beginning, Nyberg hit back and won next three shots but Czapla opened turbo and won 6-4 and continued to the Gold match, Nyberg as looser to the bronze match.

Nyberg started the bronze match strongly and took the lead 3-0, Stepanov didn’t give up and won four next shots. Nyberg attacked back and won two next shots, but Stepanov again the 10th shot. The last two shots Nyberg didn’t give any change for Stepanov. The great champion was beaten with result 7-5.

In the gold match Dmitry Romanov ruled the rhythm of the competition. He had four small mistakes and Czapla used those but couldn’t managed pass Romanov. We could say that this winning was easier than against Stepanov.

By watching the result you could think that there was coming very tight medal matches, but what happened. In the Gold Match Viktoriya Rybovalova was again superior and won 6-1 her teammate Galina Avramenko. Probably Olga Stepanova was persisted from the semifinal loose while beat Liudmyla Vasyluk (UKR) also superiorly 6-1 and won bronze.

The women’s team competition was triumph of Ukraine who won gold with result 1118, Russian Federation won silver (1091) and Germany won the bronze medal (1074).