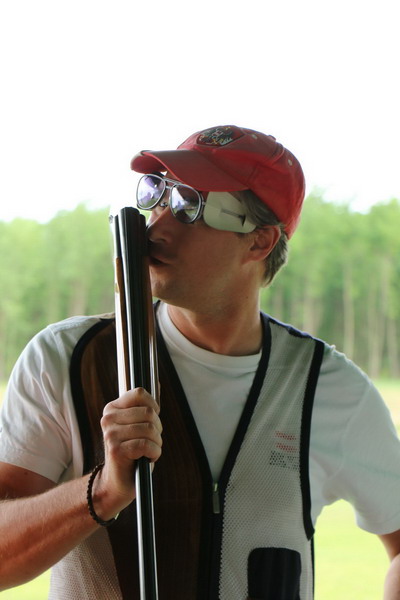 Trap men finals were as exciting as you can imagine. The windy weather made it challenging to shoot for athletes. Athlete who controlled winds better than anybody else was tall Austrian Andreas Scherhaufer. He made history of the Austrian shooting sport by becoming the first shotgun Champion ever. Austrians are mainly better known by rifle and pistol shooting.

“The qualifications were for me were challenging up to today. Fortunately I missed only twice at the qualifications. This is something what I have been dreaming for a long time. My scale is going up. I tried to be very calm at the finals, I have known Massimo (Fabbrizi) for years. He is a very stuff competitor and had big finals many times, and I was very happy when I beat him today. In finals there are only excellent athletes, sometimes you have lucky, sometimes not. Today it was my turn to draw the best card from Mrs. Fortuna”, said new European Champion. “Next week I’m travelling to Beijing World Cup and after that of course my goal is Granada – the World Championship. Well, of course it is nice to make some marks to history and to be the first shotgun Austrian European Champion. It was my turn to do something”, told humble Champion.

In the semi-finals both athletes Fabbrizi and Scherhaufer shot 14 targets from 15 and cleared their way to the gold. In gold match Fabbrizi shot a little bit nervously and missed the 5th, 7th targets when Scherhaufer made perfect shooting. In target 11 Fabbrizi missed again and same happened to Scherhaufer’s 12nd target. The 14th target was mortal for Fabrizzi when Scherhaufer shot two perfect shot. The last clay was cosmetic while the game was already over. Scherhaufer won the European Championship with result 13-11.

In Bronze match there was a triumph of David Kostelycky (CZE). The Croatian Anton Glasnovic who was the best in qualifications started nervously and missed the first target. He missed clay 13 and 14 too, when Kostelecky missed only once (11th target). Kostelycky won bronze with result 14-12.