ANOTHER VICTORIOUS DAY FOR THE EUROPEAN SHOOTERS IN RIO 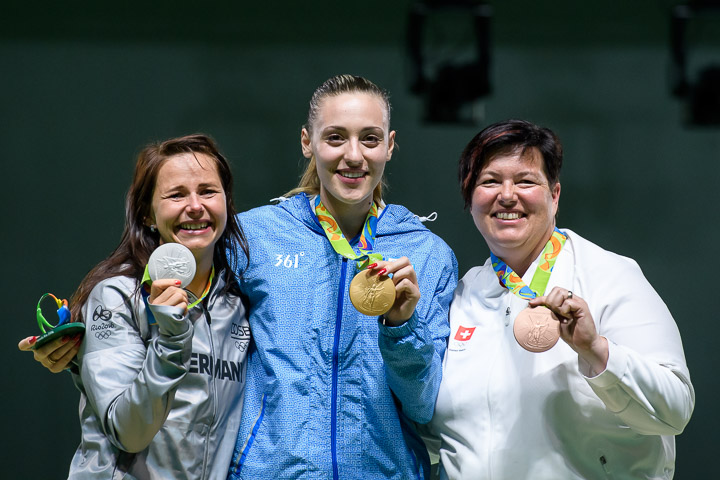 Anna Korakaki from Greece, Monika Karsch from Germany and Heidi Diethelm Gerber from Switzerland were on the podium after the end of the 25m Pistol Women even in the Deodoro Olympic Shooting Centre.

There were exactly 40 participants on start of the 25m Pistol Women on Tuesday, August 9,- the seventh event in the shooting program of the Games of the XXXI Olympiad in Rio de Janeiro. After Qualification the number of contenders reduced to eight. Six of them were from Europe: Anna Korakaki from Greece, Monika Karsch from Germany, Heidi Diethelm Greber from Switzerland, Ekaterina Korshunova from Russia, Nino Salukvadze from Georgia and Antoaneta Boneva from Bulgaria. The remaining two places in the semifinal got Zhang Jingjing from China and Jo Yong Sink from DPRK.

Anna Korakaki and Monika Karsch were the best in the semifinal and proceeded to the Gold Match, while Heidi Diethelm Greber and Zhang Jingjing got the right to compete in the Bronze Match. Those were two extremely tense duels! The Swiss shooter beat the Chinese by 8 points to 4. And Anna Korakaki became the new Olympic Champion after dramatic competition with Monika Karsch where the young Greek athlete was leading 6 point to 0, then the score became equal and only the last shot in the seventh series determined the winner.

The European shooters won already three out of seven events in the Rio-2016 Olympic shooting program.