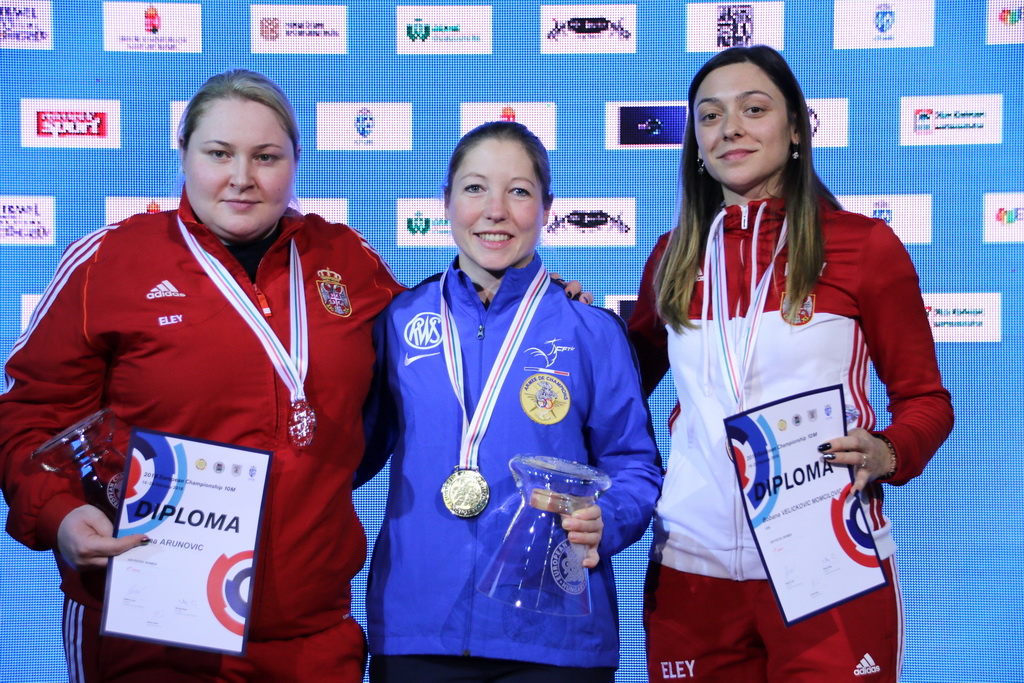 The last individual competitions were competed in Györ on Saturday. In turn there were 10m Air Pistol for Women and Men. Also Running Target juniors finished their ”job” today.

When looking at the finals starting list it seemed to come very interesting final. And so it was. Serbian Momcilovic started strongly 50.3 and she took the lead after the first 5 shots. French Celine Goberville answered for Momcilovic and took now the the lead after 10 shots by shooting ”good tens” and in to the 11th shot was 10.8. Behind Goberville Serbians had taken the next two places. Goberville continue her strong shooting and she was on the top after 15th shots. Then she had 9.5 and 9.8 hits and then used Momcilovic her possibility by shooting 10.9 and 10.6 and she took the lead only with 0.2 difference before Arunovic. Goberville drop to third place but she was only 0.5 behind leader.

During the next shots (19th shot) Goberville was still leading with 0.5 advance to Arunovic. Then it was Arunovic turn to attack and go to top place. The difference of Arunovic was now only 0.2 after 20th shot. Arunovic shot 10.1 and 10.6.

Shot number 21: Arunovic hits 9.2 and Goberville 9.4. Next shot brings to both excellent 10.7 – situation still equal. Two shot left! What do they do? Goberville hits 10.4 and Arunovic 9.2 and when the last shot gives result 8.9 and Arunovic shoots 9.7 we saw a new European Champion – Celine Goberville from France.

Behind the main drama Bobana Momcilovic takes the bronze. Goberville’s gold result was 240.2 and silver result 239.8. The bronze medal was won by the result of 219.0.

“The final included deep pressure and it was very tight. I could handle anyway the pressure well and it was a good final for me. Feelings are incredible now and I was nearly to lose my faith but some way I collected my emotions and stayed cal. That was ever so hard final”, sighed the new European Champion Celine Goberville.