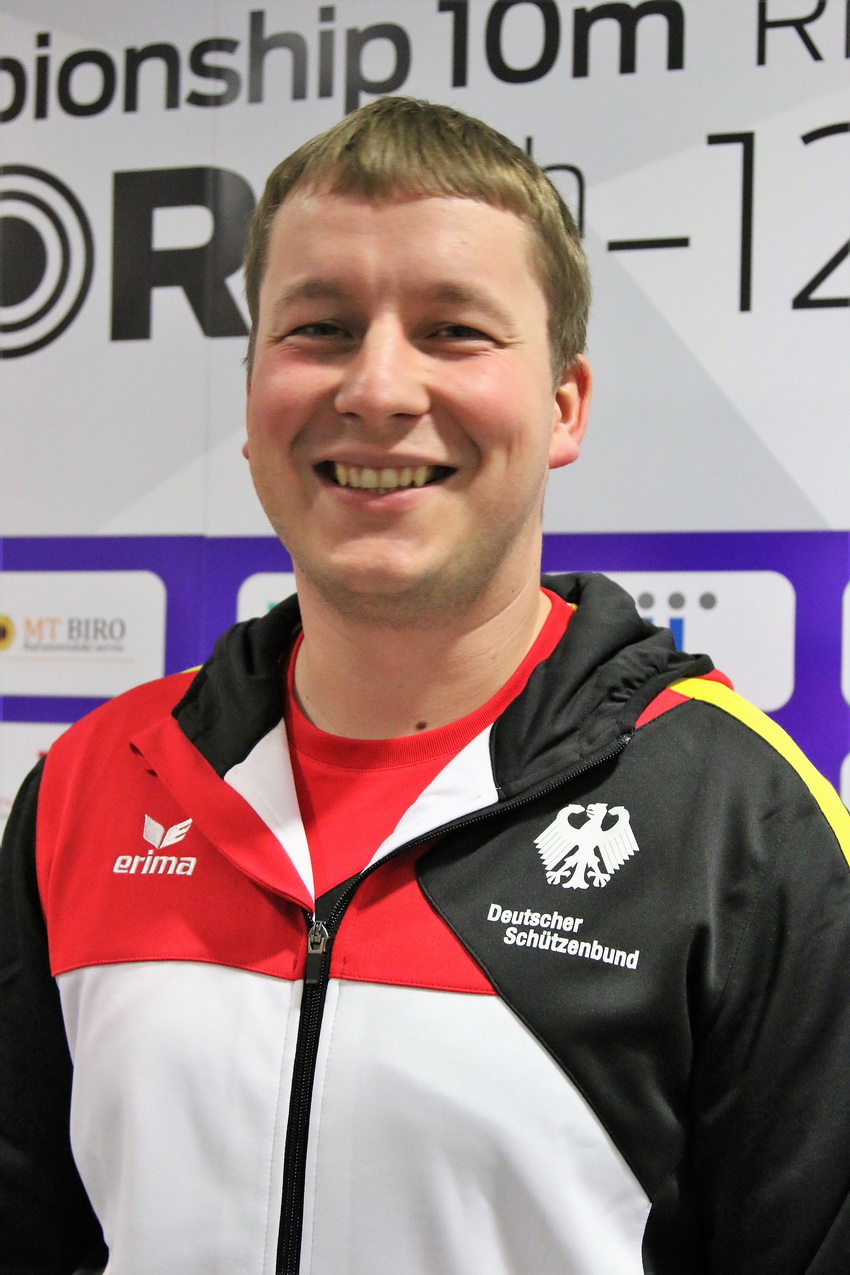 European Championship 10m continued with a lovely weather in Maribor. Yesterday all the Juniors event were successfully competed, and now it was the turn of Men and Women events. The first two events, where Finals and medal matches were to be competed, were 10m Air Pistol Men, 10m Air Rifle Women and Running Target Men (30+30) and Women (20+20).

In the Qualification of the Air Pistol Men four athletes shot same result 582 and achieved the place for the Finals. They were Pablo «Pulse» Carrera (ESP), Nikolai Kilin (RUS), Christian Reitz (GER) and Mathieu Perie (FRA). The other athletes who had reached place for the Finals were Damir «The Dominator» Mikec (SRB -581), Ismail Keles(TUR-578), Asgeir Sigurgeisson (ISL-578) and «the Grand Old Man of the Pistol – the King», Joao Costa (POR-578).

The Finals started in direction of «the Pulse» Carrera. He was leading and keeping the top place until the 16th shot, but in that time former Rapid Fire Champion Christian Reitz arose beside him. During the next four shots Carrera lost his touch someway and couldn’t get higher than 10.0, he shot even 8.7. He was finally the fourth. When Carrera lost his touch the others shot strongly. Cristian Reitz took the top place and was leading after two last shots with one point before «Dominator» Mikec.

Two last shot: Reitz shot quickly – 9.9. Mikec aimed longer, concentrated and shot, 10.3. Difference now only 0.6 before the last shot. Reitz can hit only 8.8 and quite soon after Reitz does his last shot - 9.2!!! And only 0.2 points difference. Reitz wins his first European Championship!

«Wow, what a Final! In the last shot I lost pressure of my hand. The shot before wasn’t a good shot also. I looked a little bit at my neighbour. Well, honestly I must admit that I had quite a little bit lucky in the end. I followed the situation on the screen when I was somewhere fourth or fifth. Then I found my rhythm in my shooting and it started going better and better. And now I’m the Champion», explained new World and European Record holder and European Champion Cristian Reitz his feelings.

Reitz gave really a change to Mikec to take the Championship but he made a small mistake.

«I decided to shoot the two last shots a little bit faster while I had aimed before quite long time. The last shot was absolutely too fast for my style still. I did someway against my wish, I didn’t want to yet but I just did it. I saw may mistake and I wish that it had not been so big. When I saw my competing mate doing 8.8 he offered me a really great change for Championship which I have wanted so much, but a small mistake cost me the gold and I received silver», moaned Mikec.

In the team competition there were no surprises seen. Russian Federation won with the result of 1734 ahead of Ukraine and Serbia. Ukraine (1728) won silver with the difference of one point ahead of Serbia. The Team of the Russian Federation consisted of Nikolai Kilin (582), Vladimir Gontcharov (576) and Artem Chernousov (576).