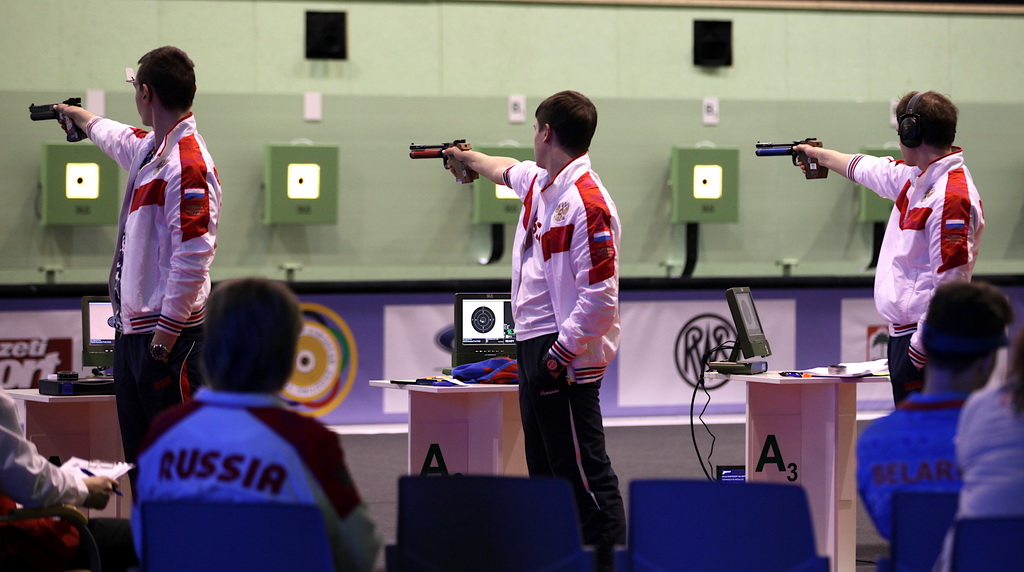 Yesterday we had totally four team events – two in air rifle and two is air pistol/ women junior and men junior. Teams will consist of three athletes. The competitions have four (4) stages each:

In qualifications athletes will shoot 30 shots in 35 minutes, 20 shots in 25 minutes in Quarterfinals. In semi-finals athletes shoot 15 shot, one by one, 50 sec. Time for every shot. In Medal Matches the number of shots is 20 shot, 50 sec. for each shot. Eight teams will be qualified from the Qualifications by the common result of three athletes.

In Quarterfinals 1st ranked team meets 8th, 2nd meets 7th etc. The winner of these Quarterfinals pairs won the place into the Semi-finals. Scoring in Semi-finals is following: The team with the highest combined result of three members of team wins two points. Equal result gives one point for both teams. 16 points is needed for the victory of the match. Winner continues to Gold Match and the losers to the Bronze Match.

In Medal Matches the number of shots is 20 – 50 sec for each shot, one by one for each team member. The team with the highest combined result of the three members (after each shot) wins two points. Equal results mean one point each team. 21 points will be needed to the victory in Medal Matches.

In the first semi-final met Russia and Germany. Russia won this match clearly 16-10.

In second semi-final met Belarus and Ukraine. Belarus was better with result 16-14

In the bronze match met Germany and Ukraine. Germany won finally this very tight match with result 22-20 and won bronze.

In gold match met the winner of the semifinals Russian Federation and Ukraine. Russian team Aristarkhov, Kondrashin, Petrov was superior and did not give any possibility Ukraine. Russia won the European Team Championship with result 22-8.

In 10m Air Pistol Women Junior Team Competition Russia and Italy had achieved the place to the Gold Medal Match and Belarus and Ukraine to the bronze match. In bronze match was a very close game. Belarus won it finally with result 22-18.

Athletes did strengthen the knowledge of excellent pistol skill in Russia – impressive action from both teams.

In the 10m Air Rifle Women Junior from the Qualification and quarterfinals continued to the semifinals Denmark, Russian Federation, Finland, and Germany.

In first semifinal met Denmark and Germany. Germany did not give any possibility to Denmark by winning 16-8. Germany continued to the Gold Match.

In the second semifinal Finland and Russian Federation competed from the other Gold Match place. Finland fought hard and won Russian team surprisingly with result 16-14 and continued to the Gold Match.

In the Bronze Match it was seen perfect shooting from the Team Russia. They made a score which was nearly perfect shot, 32,5 and it was missing only 0.2 points from the full score! So the Russian team ruled and won Denmark with result of 22-8!

In Gold Match Finland started very strongly and took the lead 4-0. Germany started to arise slowly and soon the situation was 7-7. During the fourth round the both teams shot an equal result 31.1, and it happened also second time later in the match. After this 7-7 situation Germany started to rule the match by winning 8 next rounds – Finland only one round and one was equal. German team Lisa Haunerdinger, Anna Janssen and Larissa Weindorf won the European Champion title with result 22-10.

In the Bronze match it looked like Italy is superior and takes easily the bronze medal while they were leading already 17-7 Croatia. Then suddenly Croatia cheered up five next rounds and the situation was suddenly only 17-15 for Italy but the run was not enough strong and Italy won the next two rounds and won bronze medal.

In the Gold Match competed Russian Federation and Croatia. There was nothing new to tell while Team Russia was absolutely superior and did not give any change to Croatia. Team Russia won the match finally 22-6 and it tells quite a lot about the match. The Gold Medal team consisted of Denis Goncharenko, Grigorii Shamakov and Ilia Marsov.