Dramatic morning finished with a joy of Gold 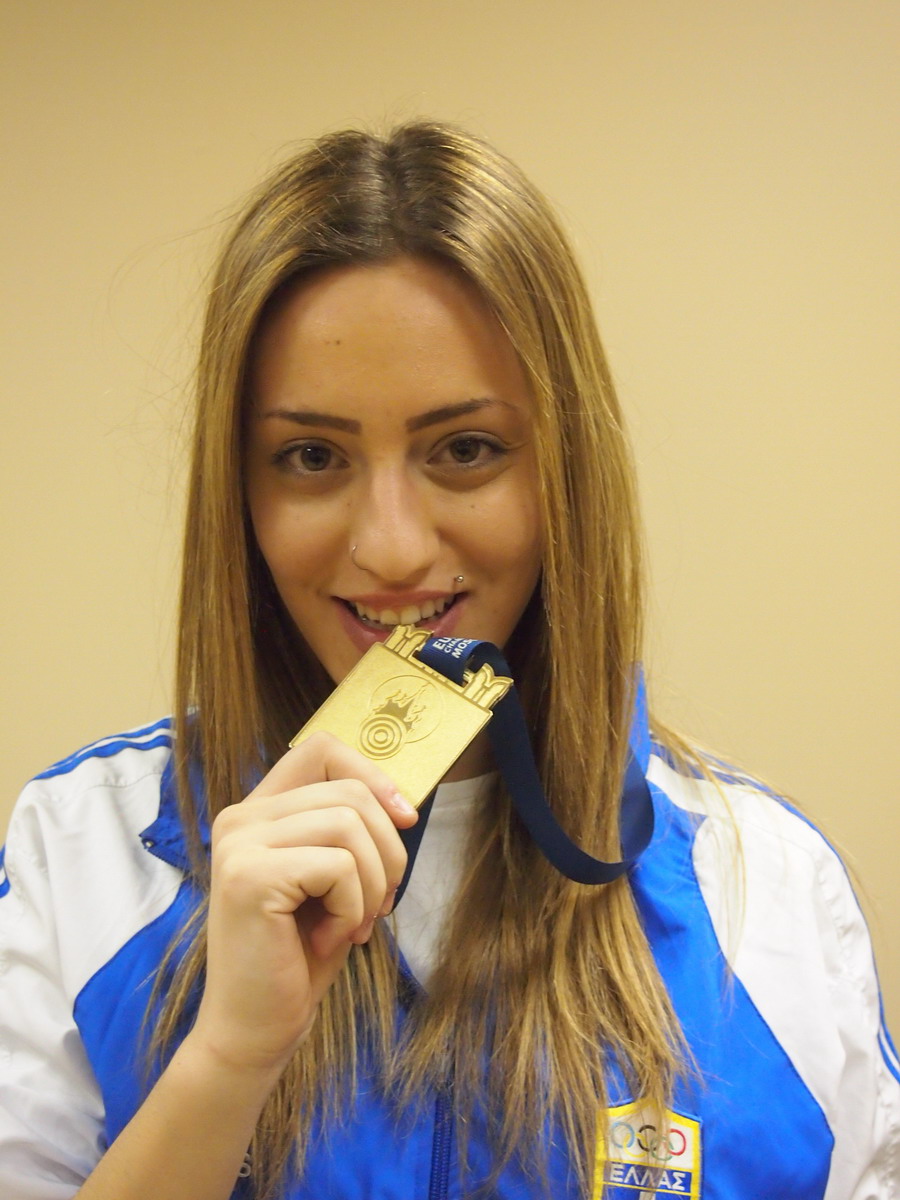 The event was full of dramatic while one of the shooters had to go repair her air pistol during the sighting shots. Her first shot hit the frame of target. She stopped her series of the sighting shots and left to visit service place. That athlete was Anna Korakaki from Greece. And finally she became the gold medal winner. By the way, the best result at the qualification shot showed Klaudia Bres (389), Anna Korakaki´s result was only the fifth (380).

“I failed the official training yesterday. At qualification I shot not bad or not so good. I was a little bit surprised but I was waiting for a good result at the finals. But then the problems began. I recognized that the grip of my air pistol was moving and the wrist wasn’t in a correct position, and also one of screws was nearly dropping out when I was shooting my sighting shots. I had only 8 minutes time to have my pistol repaired. We managed to do it. After reparation I shot first 5, small corrections and then 7 and 8 and I was prepared for the final. That was quite dramatic but I thought of trying to do my best. I didn´t have anything to loose. I heard only my results and I didn´t have any idea to know who’s going to win. I was very surprised to hear the final results. My next goal is to try obtaining the final place at Youth Olympic Games in China in August, then to the World Championships in Granada”, said Korakaki.

That was the road through the problems to the stars. The winning result of Anna Korakaki was 201,0 and it became a new Final World and European Record Junior. The silver medal went to Ukrainian Polina Konarieva (200,6). The bronze medal winner was Vitalina Batsarashikina (179,2) from Russia.

The team completions were won by Poland with the result of 1148 which is the new Juniors World and European Record. Silver went to Russian Federation (1130), and bronze medal went to Czech Republic (1122). The Polish gold medal team consisted of Klaudia Bres (389), Joanna Tomala (381) and Agata Nowak (378)

Maximillian Dallinger was the master of excitement by winning the 10m Air Rifle Men Junior Championship in Moscow. He made a super final and could concentrate, even though his right hand was shaking so that he has to clasp his hand (fist) and open and clasp again so it relaxed a little. He has done it many times while excitement did not disappear.

“I was ever so hard to shoot while I was nervous. It was the hardest final for me ever. The shooting was good while the result was gold. When I recognised that I´m losing my leading position, I said to myself: hey, try to relax and shoot better. This was a real super final to me”, said the winner.

Dallinger competed first hard against Lorenzo Buffard. Behind Buffard came Russian Maslennikov who received all the time these two in front of him and finally forwarded Buffard who shot 9.4 and 10.00 when Maslennikov shot 10.7 and 9.6. For the two last shots there were left only Dallinger and Maslennikov who was only 0.4 points behind Dallinger. Dallinger´s two last shot were 10.7 and 10.2, and Maslennikov managed to receive 10.5 and 10.4. The competition for gold had finished for Dallinger whose result 205.7 is a new Final World and European Record Junior. The Silver medal winner was Vladimir Maslennikov (205.3) from Russian Federation, bronze medallist winner was finally Lorenzo Buffard (183.8) from France.

The 10m Running Target Mixed Women Junior event was a triumph of Hungarian Veronika Major before Ukrainian Darya Rozhniatovska. Major (364) beat Rozhniatovska with one point. The winner of Bronze medal was Nadiia Dienhina (359) from Ukraine too.

During the European Championships there were also competed 10m Running Target Women Moscow Grand Prix competitions. The Winner of the competition was Russian Olga Stepanova, who won with a result of 380. The following medal winners came from Ukraine: Galina Avramenko (378) won silver and Irina Izmalkova won bronze with a result of 368.