European Championship finished with the victory of Italy and France 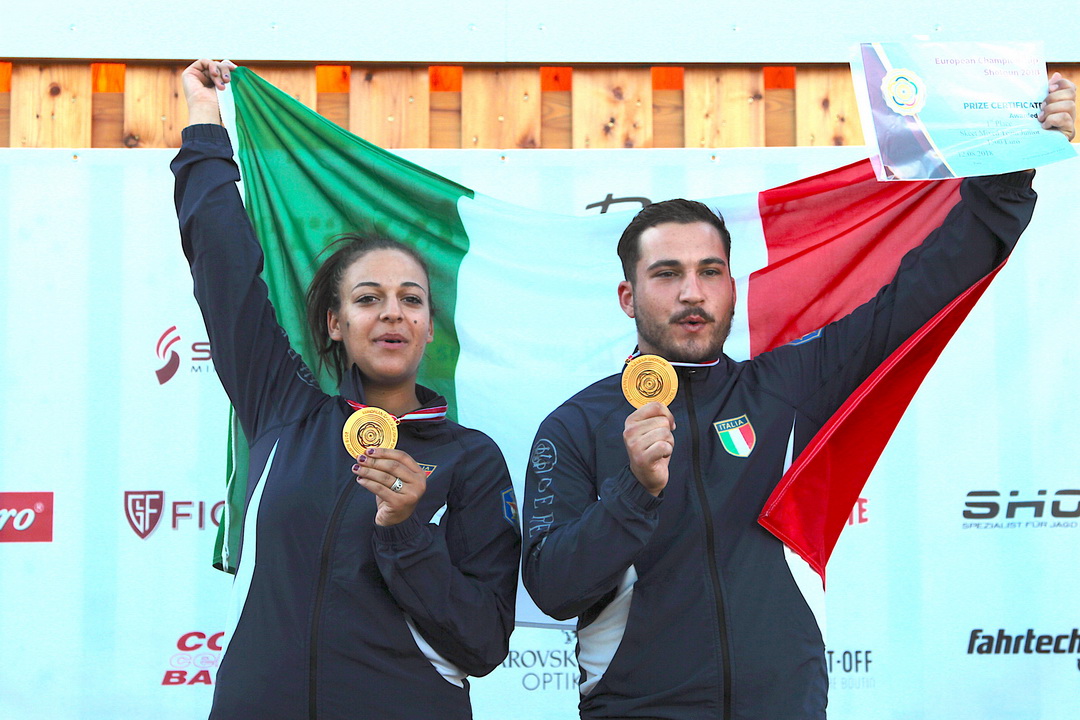 Sunday 12th August, the last competition day of 2018 European Championship Shotgun in Loebersdorf. Before we totally say goodbye we had still events left. Sunday was the day of Skeet Mixed teams. The team consists of a female and a men athlete. Nation can send maximum two teams per event. There were 29 teams in Mixed and 12 teams in Mixed Junior qualification event.

As it has been told many times, the final is an own match. The qualification results do not very often mean anything. You have to save your power also until the end of the match. Unfortunately this was also proved this time too when the record maker team was the first who dropped out of the final. Anyway the visit of the Romanian team in final was very welcome.

In the final itself the Italian team ruled the final all the time and they really did not give anybody to pass them. The kept the pole position after all stages and won finally the European Championship with result 52 (max60). The silver medal team was Czech Republic with result of 49. And the bronze medal winner Russian Federation with result 40. The Italian team consisted of Giada Longhi and Elia Sdruccioli.

France surprised all in the final

In the Skeet Mixed Qualification the best team was Italy 1 with result 145 (Diana Bacosi and Gabriele Rossetti) Rossetti hit 75 targets and Bacosi 70 targets. Following places conquered with result 144 Italy 2 and Ukraine 1. Fourth was France 1 with result 142. The fifth and sixth, France 1 and Germany 1 shot both 141 targets.

The final was not at all so clear as Junior’s final a moment ago. The final looked be the duel between Italy 1 and France 1, but then Germany enter also to the battle of Victory and European Championship. The pole position changed between France 1 and Italy 1 many times. But then after 36 targets Germany entered to the fight of the victory while the Italian and French teams made some mistakes. After 36 targets Italy, France and Germany 1 had the same result of 32.

This situation (equal scores) lasted to the end of 40 targets.

During the four next targets France hit prefect to all targets but Italy1 missed one and Germany1 missed two. France did not give up the pole position and they kept into the finish of the match. France won the Skeet Mixed team Championship with result 55 which is a new European record. Silver won Italy 1 and Bronze medals travelled to Germany (44). The French team consisted of Lucie Anastassiou and Anthony Terras.

In the short Closing Ceremony which was organised just after the last Awarding Ceremony, the President of the Austrian Sport Shooting Federation (ASF) thanked all the athletes, coached and federations participating in this Championship. He thanked also European Shooting Confederation which decided to give the Championship in Austria and in Leobersdorf. Also he thanked warmly all the volunteers, referees, Jury members and sponsors who had done this possible. Into the end he declared the Championship closed.

After the speech the ESC flag was sank down and The Secretary General of the ASF and Organising Committee Mr. Josef Hahnenkamp handed it to Croatian Jury Member Drazen Bozic to take it to Osijek Croatia where the next European Championship (10M Air Rifle, Pistol and Running Target) will be organised.

Athletes set 44 New European Records including nine World Records. The records will tell something of the high level of European athletes but also the quality of the venue. It is possible to get success in Leobersdorf!

We will remember you warmly! Thank you!