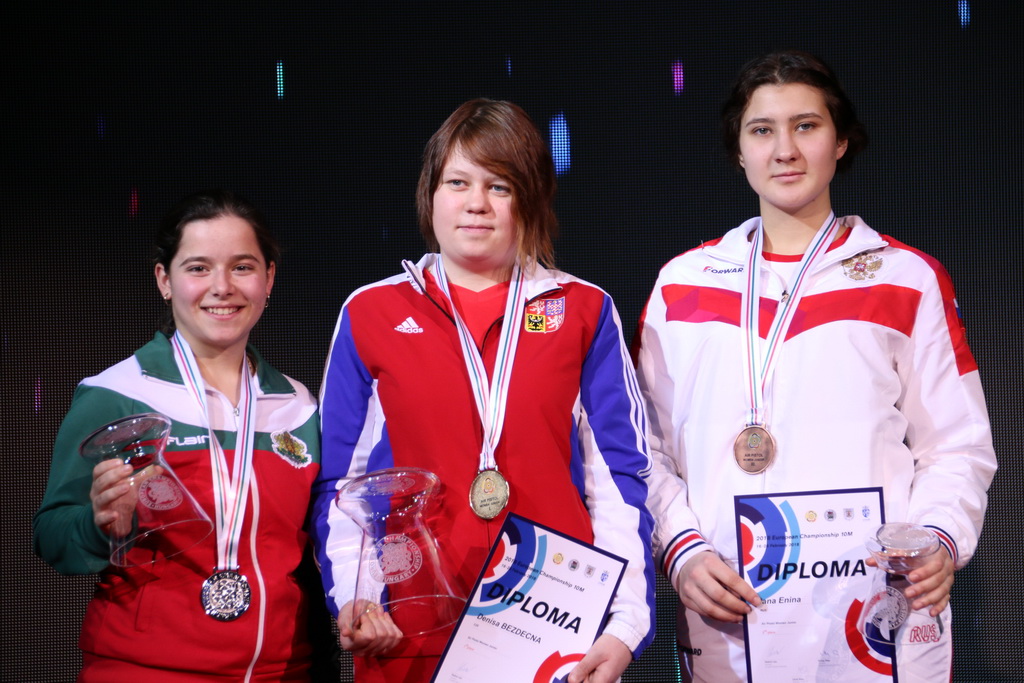 Miroslava Mincheva (BUL) and Gloria Fernandez (ESP) shot equal results 567 which would be written in to the history books as a new Qualification World and European Record Junior. On the list Micheva was higher by shooting 14 inner tens. The other six athletes who managed to reach the finals place were Selina Kovalevska (LAT), Giulia Campostrini (ITA) – both with result 566. Nino Khutsiberidize and her team mate Lizi Kiladze (GEO) hit both 565, Czech Denisa Bezdecna shot 564 and the last final place was won by Russian Federation Iana Enina with result 563.

The final started with rhythm of Latvian Selina Kovalevska. She made an awesome 5 shots result 52.5. which included such hit as 2 x 10.6 and 1 x 10.9! Amazing start! The Audience was exalted, so seldom we can see in pistol this kind of start. But there also very often the other side of medal – glory may be disappearing soon if you know, listen or see too much. So it happened unfortunately to Selina too. She lost her concentration and could not fix it during the rest of the final. Pity! But she a young talent and I’m sure she will be back and we will hear about her.

After Kovalevska lead the top place took Bulgarian Mirolava Mincheva and kept it during the nine next shots. Behind Mincheva’s lead there had started her rise to top Czech 20 years old Denisa Bezdecna. And after fifteenth shot she was already leading. And Denisa kept it until to the end.

The gold was not any surprise to Denisa while this was her third time to be in finals and also on the podium, but first time on the highest step.

"I was more satisfied to my shooting as in qualification. I believed that I can rise to the podium even I was not leading or being on the top places all the time. I was very calm during the final, did my best and here I’m at the moment", told the new European record shooter Denisa Bezdecna whose next goal will stand on the Olympic podium.

Silver medal winner was Bulgarian Mirolava Mincheva and bronze medal was won by Russian Iana Enina with result 213.3. Bezdecna’s gold medal result was 236.8 which is new European record. She beat Mincheva with 4.3 points.