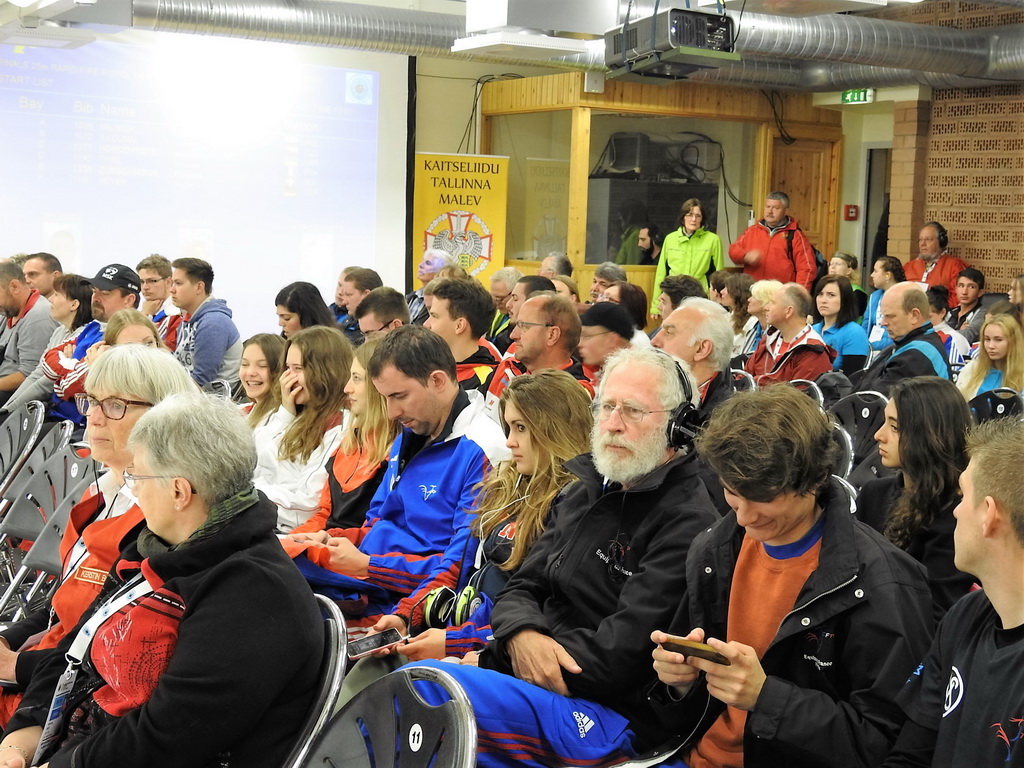 Mänikku woke up in the rain and wind, but it didn’t seem to influence the minds of athletes and coached when they walked to the shooting centre. They sighed cheerfully good mooning and continued to their firing points.

The First competition which was in turn was 25m Rapid Fire Pistol Men Junior. The first stage was shot yesterday late afternoon and the best there was Frederik Zurschmiede from Switzerland. On the second place there was Pole Oskar Miliwek. The following top position showed nearly same names as in other 25 m events shot earlier.

And the same rhythm continued also in the second stage on Friday morning. When both stages of the Qualifications were shot, the familiar names were on the top: Zurschmiede (575), Miliwek (575), Heyer (568), Horodynets (567), Thiel (567), and Skoumal (565) were qualified to the finals.

In the finals Czech Lukas Skoumal showed again the truth that final is a separate competition and everything can happen, point is that you manage to take your place to the finals.

Behind the winner there was quite a turbulence. The places changed nearly after every series. Maksym Horodynets was very nervous and in the first 5 shot series he couldn’t get any hits. French Nicolas Thiel quite fluently and stayed among the three best also all the time. Horodynets started also to climb up after his nervous start. During the 5th series he arose already to two second place. When 7 series was shot, Skoumal was still leading with 22 hits. Horodynets and Thiel had equal number of hits (19). It meant a shoot-off for the medal between those two. Nicolas Thiel managed extremely well – 5 hits against Hordynets´s 2 hits. Bronze for Horodynets. In the last 5 shot series Skoumal made 2 hits, but Thiel made two hits more. Unfortunately that was one too less for shoot-off, and in that way Lukas Skoumal from Poland was crowned as European Champion.

“The ranges are very good here. I like them. The qualifications were terrible for me, I don’t know why. But the final was perfect. It suited me, perhaps it was lucky but you need it sometimes. The final was absolutely very hard for me”, explained Lucas Skoumal, whose brightened his last year silver to gold medal. “My big dream is to be once the Olympic Gold medallist. This just the start”, Skoumal reminded.

In the Team competition the brightest medals were bowed by the Team of Germany. They beat the Ukrainian team with the difference of four points. The bronze medal winner was team of France. The Gold medal team achieved the result of 1689 and consisted of Philip Heyer (568), Andre Mikilis (565) and Florian Thuenemann (556). Silver medal result was 1685, and French bronze result was 1677.

The final (kneeling) started in the lead of Larsen, but after 15th shot Filip Nepejchal from the Czech Republic took the lead. His kneeling result was 151.4 points. During the last shot Larsen sank to the 5th place. Istvan Peni was on the 7th place after kneeling.

Prone position:  Czech Filip Nepejchal continues in the lead and actually grows his leading. He shoots two times over 53 points series. His result after the kneeling and prone was 309.4. Norwegian Karlsen was on the second place (305.7) 3.7 points behind Nepejchal. Croatian Borna Petanjek has rose to the third place and Istavan Peni was on the 4th place only 0.6 points behind Petanjek.

During the change of position from prone to standing Petanjek faced failure – his front sight is loosen from the pipe. He tries to repair it with z plastic tape, but does not manage. He has to stop the competition. What a disappointment for him!