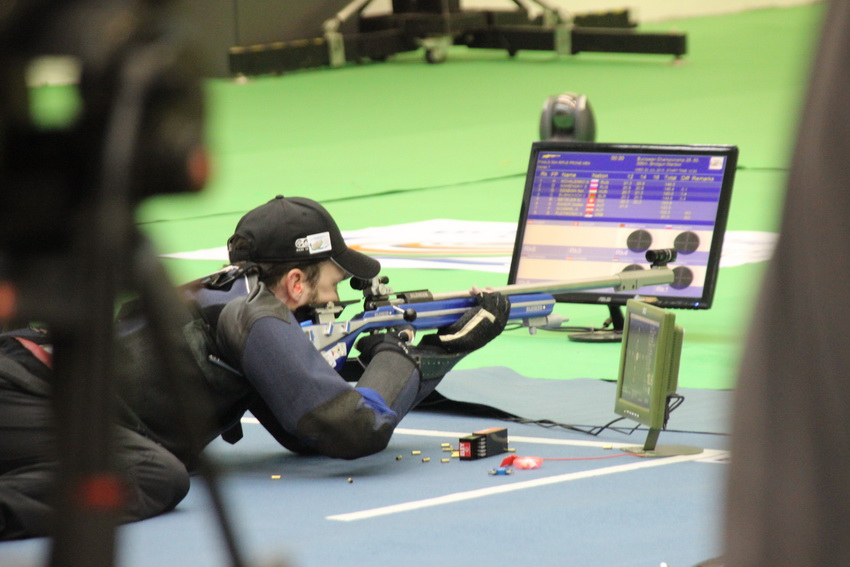 Finals of five events were in the program of the second day of the 2015 European Championship that is taking place at the Gaj Pragersko shooting range near Maribor, Slovenia.

Sergei Kovalenko from Russia won the first gold medal of the day. He was the most precise in 50m Rifle Prone Men event with 209,2 points. The silver medal went to his compatriot Sergey Kamenskiy (208,1 points), the bronze – to Vitaly Bubnovich from Belarus (186,1 points).

Two Quota Places for the Games of the XXXI Olympiad were disputed in 50m Rifle Prone Men. One of them went to the winner of the event, the other – to Norbert Szabian from Hungary who finished on the forth place because Kamenskiy and Bubnovich had won the Quota Places in the previous competitions.

The Russian trio was on top of the podium in the team classification establishing the new European record – 1874,1 points. Austria with 1873,4 points became second, Norway – third (1870,6 points).

In Shotgun the medals and Olympic quotas were disputed in Skeet Men. Luigi Lodde from Italy confirmed his high class by winning Mitas Efthimios from Greece in the Gold Match. Jesper Hansen from Denmark was more precise than Eric Delaunay from France in the Bronze Match.

Nevertheless, both losers were happy with the outcome of the competitions because they obtained the right to participate in the Games of the XXXI Olympiad. Italy has two Olympic licenses in Skeet Men already and Hansen had also won one before. The third Quota place disputed in Skeet Men at the 2015 European Championship went to Mikola Milchev from Ukraine who finished on the fifth place.

In individual Skeet Men Juniors the victory was attributed by Gabriele Rossetti from Italy who in a dramatic shoot-off managed to be more successful than Eetu Kallioinen from Finland in the Gold Match. Nikolas Vasiliou from Cyprus beat Reino Velleste from Estonia in the Bronze Match.

In Running Target the Russian Maxim Stepanov won the RT Mixed Men event with 396 points. Emil Martinsson from Sweden got the silver medal with 394 points and Lukasz Czapla from Poland – the bronze (390 points).

Russia was the best in team classification followed by Finland and Hungary.