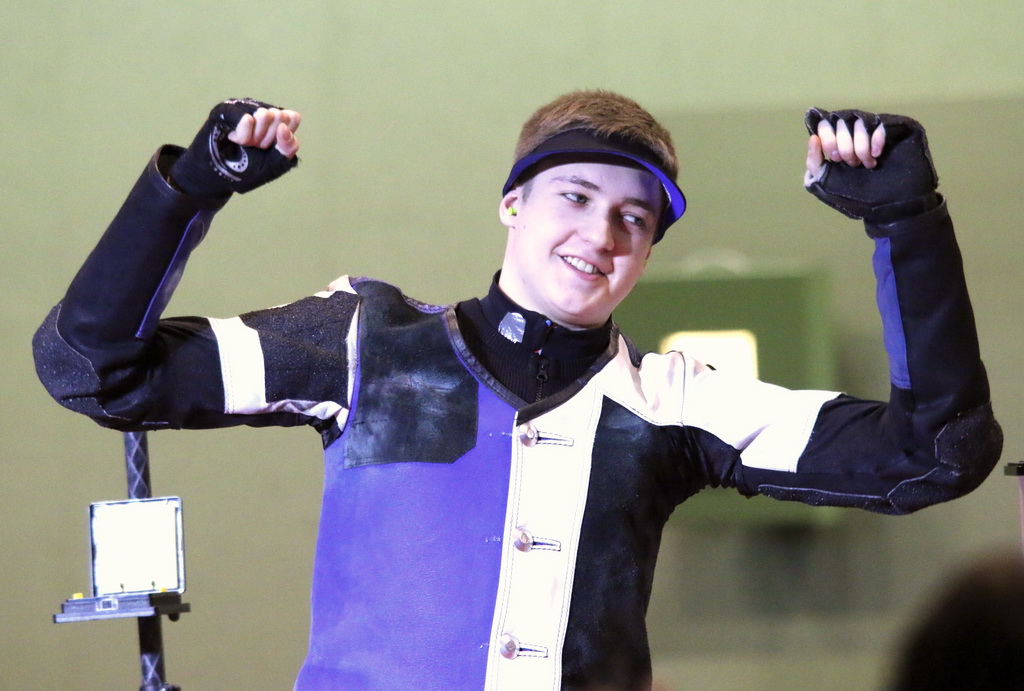 The second junior rifle competition was Air Rifle Men Junior. It gave also for audience a great and exciting moments into the end. It looked that Czech Filip Nepejchal will win the Champion while he was leading nearly all the time, always until the 21 shot. He lead was even 1.7 points. But as so many time we have seen, the game is over only when the last shot is done. And so it was today also.

You could feel the excitement when the athletes aimed the two last shots; Marsov hit 10.3 – Nepejchal 10.5 and goes to lead. Last hits: Nepejchal 10.4 and Marsov finish his competition with 10.8 hit and won the championship with difference of 0.2 points. Great show again!

The bronze medal winner was Grigorii Shamakov (226.8) from Russian Federation.

“I didn’t know the situation during the finals, I don’t follow others results. I try to do only my best. Every final is different, last European Championship I made a bad mistake and now I tried to prevent myself to do it again and I managed in it”, explained the new 20 years old rifle champion his actions during the final.

The last final of today was the Mixed Team 10m Air Pistol Junior competition. There altogether 34 team participating in this competition. The team consisted of a female and a male athlete.

The best team of qualification was German 1 which consisted of Miriam Piechaczek and Robin Walter with result 768 which is a new Qualification World and European record.

The other teams to finals were Belarus 1, Bulgaria 1, Russian Federation 1 and Bulgaria 2.

In the finals team of Russian Federation continued their long pistol tradition by winning superior the final with difference of 8.6 points before Bulgarian team 2. The winning result was 480.7 which is also a new World and European record. The Gold medal team Russia consisted of Iana Enina and Anton Aristarkhov. Silver medal team was Bulgaria 2 (472.1) before Bulgaria 1 (411.5).