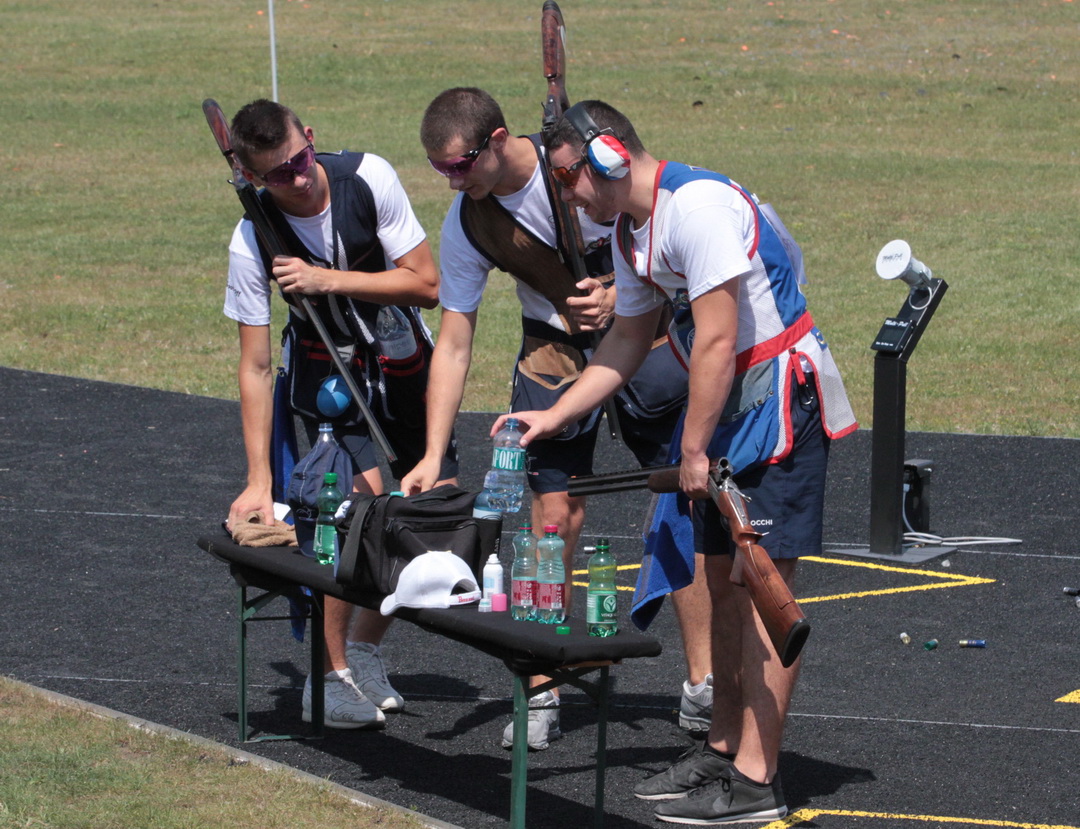 Saturday was the day for new separate team competitions in Trap.

In the Quarter pair 1 met Italy and Slovenia. Italy took the victory with result 62-58. In the pair 2 Germany beat Czech Republic 61-57 and same did Finland against Spain. The result was equal 59-59 but Finland had higher ranking in the qualification and they continued. This is the rule!

In Pair 4 France did not give any possibility to Great Britain by winning those 66-62.

In the semi-final France surprised Italy by winning team clearly 65-60 and Finland beat Germany clearly with the difference of five clays. Finland´s victory result was 61-54.

So the pairs for the medal matches were ready ITA-GER and FIN-FRA. The bronze match was tight only during the first round and it finished 10-10. After that slowly passed Italy and did not let pass them again. After second round situation was 21-24 for Germany and the speed stayed the same in third round 33-36. After fourth round Germany was leading 44-50 and finally won bronze medal with result 57-61.

France did not hesitated in the end of the final

In the Gold match competed Finland and France. Finland stayed in the leading position during three rounds (15 clays each). The result was 37-36 for Finnish Team. After next round had France taken the lead with one clay 48-49. In the last round Finland tried strongly pass France but France did not give possibilities when they hit the clays and Finnish Juniors made misses. Victory for France with result 61-63. The French result 63 is a new European record. The French team consisted of Clement Francis Andre Bourgue, Nathan Michel Jamy Thuillier and Jason Picaud.

In Trap Women Junior there were only four teams and the duel pairs were ITA-GER and GBR-CZE.

In Semi Final 1 Italy beat Germany with result59-52 and in the second Great Britain beat Czech Republic clearly with result 57-46.

In the bronze match competed Czech Team and German Team. Czech team fought roughly during the first ten clays but slowly German started ruling the bronze match. The result in the end was 39-47 for Germany.

Germany and Italy had reached the place to the gold match against Great Britain. Italy was superior in this match and did not give any change to Great Britain which did not get “motor working” in correct way during the gold match. Italy won with result 55-43. Italian victory result is a new European record. The team consisted of Sofia Littame, Erica Sessa and Giulia Grassia.