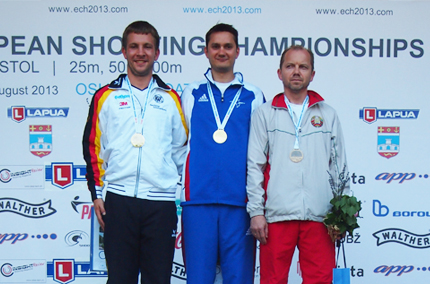 On the second day of the competition the fire line will be approached by 66 junior men in 50 m Rifle 3 Positions. The team of Germany won the European Championship with the total result of 3462. Andre Link, Johannes Frueh and Mario Nittel competed in the gold medal team. The team of the Russian Federation (Vladimir Maslennikov, Evgeny Panchenko, Evgeniy Kharkov) won the silver with the total result of 3453.

The bronze went to Switzerland (Roberto May, Patrick Hunold, Manuel Luescher). Their score was 3447.

In individual event after the exciting and sweaty competitions the German Andre Link could rise his rifle up over his head and sigh with relief. He became the European Champion with the final result of 455,1.

- I couldn’t believe that I won, before I heard the results. My heart was pumping and the standing position is always so hard. Wow, I’m so happy, so happy, - described the Champion his feelings just after the final.

The bronze medal was won by the Austrian Germont Rumpler with the result of 440,6.

50m Rifle Prone Men was the second individual final of Wednesday. The team competition that took place on Tuesday was won by France with the new World and European record result of 1873,6.

In individual event the German Henri Junghaenel was leading nearly all the competition but before the “medal shots” the French Valerian Sauverplane took the lead. The situation changed again before the final shot. These two excellent athletes had equal results. Everybody stopped breathing. The French Sauverplane shot quickly - 10,6. After two seconds we saw the Junghaenel’s answer - 10,4. The French Valerian Sauverplane became the gold winner and European Champion with the result of 208,8. The German Henri Junghaenel lost only 0,2 points and became the silver medallist.

The final was interesting and exciting, which creates a very good marketing for the shooting sport. The competition was not over until the last shot was made.

Sergei Martynov from Belarus became the winner of the bronze medal with the result of 187,4.