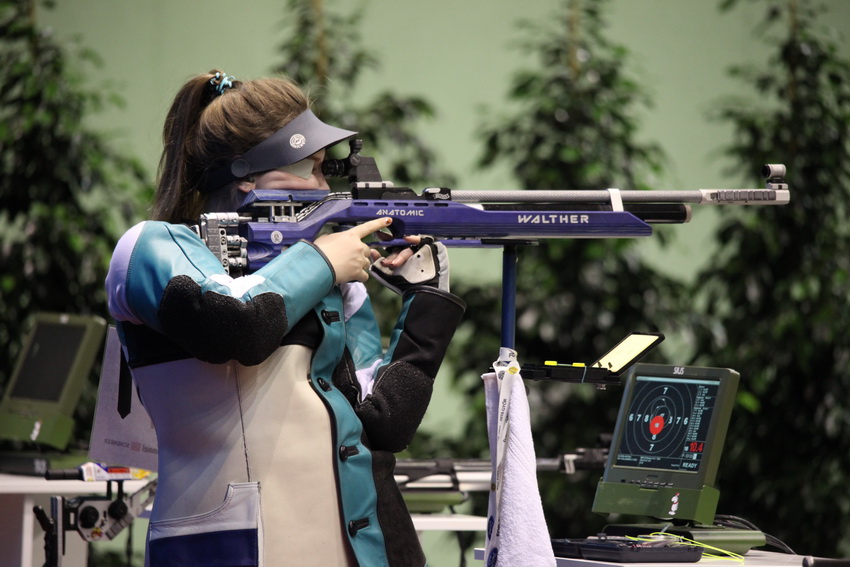 The second day included Running Target, Air Pistol and also Air Rifle. The first competition which was clear was 10m Air Rifle Junior Women Qualification. The best of the qualification was Russian Anastasija Galashina with result of 416.2. Only 0.7 points behind her follows German Teresa Tripp (415.5). Serbian Milica Babic shot also powerfully and was third with result of 414.9. The five next athletes who qualificated into the final were Sanja Vukasinovic, SRB (414.6.), Mandy Mulder, NED (414.5), Sarah Hornung, SUI (414.1), Manon Smeets, NED (413.8) and Katarzyna Komorowska, POL (413.4).

The Junior Women 10m Air Rifle was the best drama that shooting sport can offer. The finalists created an excellent drama. There were seen excellent shots, the situation changed on top nearly all the time; after 12 shots there has been four athletes on the leading place: Hornung, Babic, Mulder and Galashina. Mulder even three times. Unfortunately Mulder couldn´t continue her strong shooting into the end and she was finally 6th.

As long as the final continued it became also clear the medals will be delivered between German Tripp, Russian Galashina and Swiss Hornung while these three changed on the top place all the time and did not give any possibility for others. When 15 shots has been competed Teresa Tripp was leading but only 0.1 or 0.3 points. During the 17th shot Galashina took the top place while Tripp shot only 9.4. During the 18th shot Swiss Hornung achieved 10.7 and passed Tripp. The rest was triumph of Anastasija Galashina who won the European Championship with the difference of 1 point (206.9). Silver travelled finally to Switzerland and Bronze medal to Germany.

In the Team competition Serbia won the gold medal after exciting moments with the difference of 2.7 points only before Russian Federation. The Serbian team consisted of Milica Babic (414.9), Sanja Vukasinovic (414.6.) and Marija Kolarevic (412.6). Russian silver result 1239.4 was 1.0 point better than the German Team who won bronze.