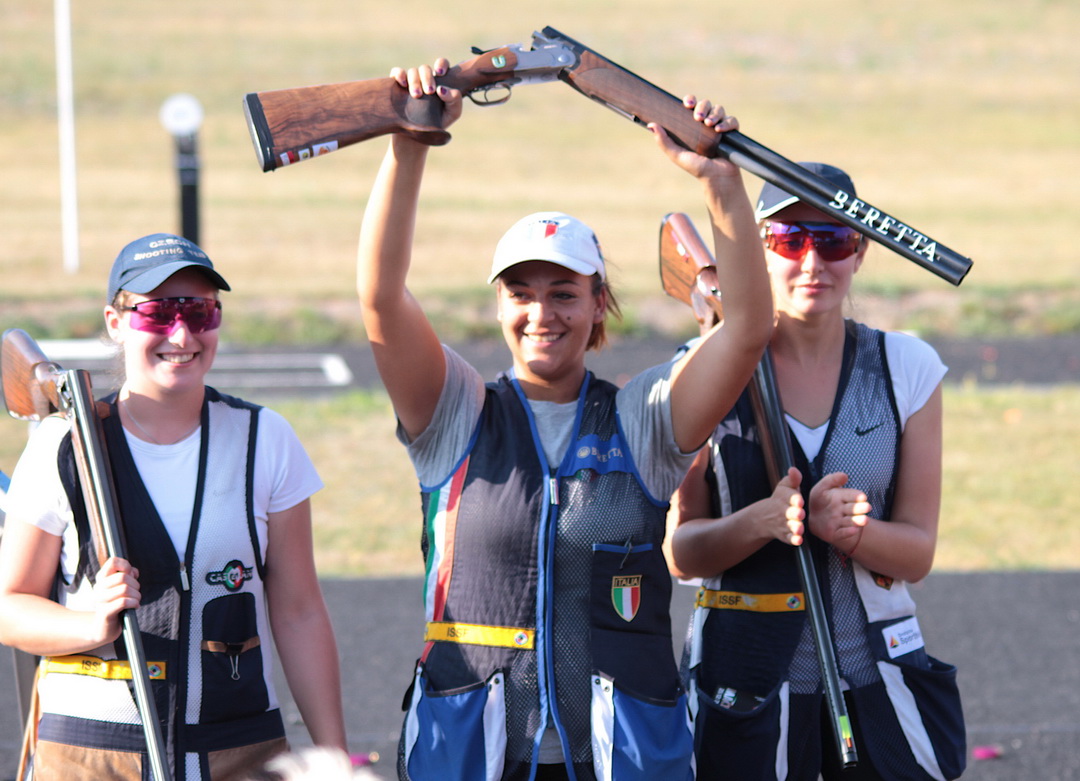 van der Veen from Netherlands. Her victory result was 118 and she won the place to the final. Zilia Batyrshina from Russian Federation who was on the top place after first day was second in the qualification and shot total result 116. The four other athletes who reached the final place were Giada Longhi (ITA) 113, Anna Sindelarova (RUS) 113, Eva- Tamara Reichert (GER) 112 and Zuzana Zaoralova (CZE) 112.

The finals are always an own match. In the Qualification strongly shot Esmee van der Veen could not defence her top position against Russian Zilia Batyrshina, Eva- Tamara Rechert and Chech Anna Sindelarova and Italian Giala Longhi. Eva- Tamara Reichert had her changes three times to turn the final for herself, but unfortunately she missed the important clays.

Finally in the end of the final Italian Giada Longhi was crowned as a European Champion before Anna Sindelarova from Czech Republic. The victory result was 49 and the winner Longhi won only with one clay difference Czech Sindelarova with the difference of one clay with result 48.

In the Skeet Men Junior Richard Klika continued his strong performance. His result was as strong as yesterday and the result was the victory of the Qualification with result 123 and a clear final place.

Second of the Qualification was Danish Alexander Karlsen who hit 120. Karlsen team mate Emil Petersen, Italian Alessandro and Czech Daniel Korcak reached place to the final by shooting 119. From the last final place, it was needed a shoot off between Czech Jaroslav Lang, Finnish Eetu Kallionen, German Christopher Honkomp and Italian Elia Sdruccioli. The best of the shoot off and last final place winner was Finnish Eetu Kallioinen. Kallioinen hit 8 targets, Lang and Sdruccioli both 7 and Honkomp 3.

The final was from the start to the end very exciting and full of happening: The lead changed quite often and on the top of three there were Eetu Kallioinen, Alexander Karlsten and Richard Klika, Elia Sdruccioli and Emil Petersen.

After 44 targets it was turn of Alexander Karlsen to shoot normal double, he made a mistake even he is routinized athlete and he had competed quite long time. He shot in wrong order the clays and according the ISSF Rules 9.10.9. H the referee and Jury decided to declare two targets zero.

Jury followed the ISSF Rules and after showing the Rule point to the athlete and the coach of Denmark, the final continued. Athletes have always the responsibility; how to move or what to do, but they must always know and follow the Rules.

Anyway I must say that Alessandro Calonaci made me an impressive influence, but same did all the finalists. When receiving a place to the final you are a winner and what positive happens in finals, is always plus!

“I didn’t follow the score board. I was only breaking the targets. It’s my job. Thank you our team, thank you my coaches and thank you my family. You have always believed me and supported me. Grazie, grazie, grazie!”, laughed the new European Champion Alessandro Calonci.

Tomorrow on Friday the Skeet event will continue with Men and Women qualification round 2 and with finals.