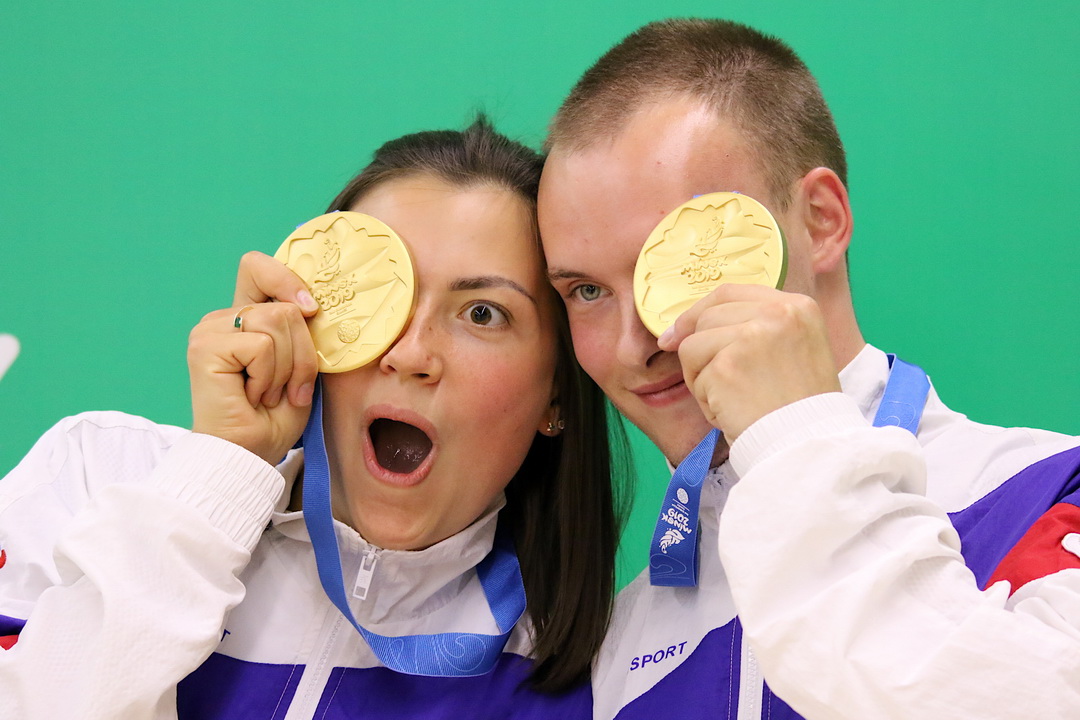 At the moment it looks like that Russian Pistol Shooting is on the top of the wave of success. Russian Federation team, Margarita Lomova and Artem Chernousov ruled the final event and won gold. They didn’t give any possibilities to the other teams. Latvian Team arose to silver and Georgia to the bronze.

At the qualification on the top of ranking there were classic pistol shooting teams. Ukraine 1 was the best with result 370. Georgia second six points behind Ukrainian team. Georgia (364), Latvia (357) and RUS 1 (355), RUS 2 (354) were the following qualified teams. Belarus reached their both teams and Switzerland reached the last places to the semifinals.

In semifinals the teams are competing as pairs: 1-8, 2-7 etc. The semifinals are an own competition, same as medal matches. I can say that the first surprise, at least a small one was that Ukraine 1 (Kostevych-Omelchuk) lost their match against Belarus 2 (Kruchanok-Zaichyk) with one point (177-178). In the second pair Georgia (Salukvadze-Machavarani) won Switzerland (Diethelm Gerber-Demierre) 172-170. In the third pair Latvian athletes (Rasmane-Strautmanis) continued their strong performance and beat hosting country Belarus (Chaika-Kurdzi) and won with result 171-169. The both Russian teams met in the last pair and Lomova-Chernousov won the team 2 Medvedeva-Aristarkhov with result 178-175.

Unfortunately it was hosting country’s destiny to fall first out off the medals with result 84.6. Bronze medals travelled finally to Georgia (87.7). In the duel of gold medals Russian team did not give any change to Latvia, even Latvia competed well. Latvia’s silver result 92.4 when Russian athletes made on the scoreboard result 97.3.

Israeli Sergey Richter made his best and unforgettable performance

The 10m Air Rifle Men was triumph of Israeli Sergey Richter. Richter had won Munich World Cup 2009, but after that the gold medal has not been found to his hand for years. In Odense, six years 2103 he won last time European Championship in Air Rifle. He had collected several silver and bronze medals.

At the qualification his result 628.8 reached on the 6th place when Russian Kamensky shot 631.1. Czech Nepejchal was second (630.2) and Norwegian Vegard Nordhagen third with result 629.6. Also Russian Vladimir Maslennikov shot a little bit better (629.1) than Richter. The three other who reached the place for finals after Richter were Slovakian Jany Patrik, Dutch Peter Hellebrand and Hungarian Peter Sidi.

It looked long time that Czech Filip Nepejchal would win the competition, but he made in his last series ”bad mistake” and it turned the ranking other way round. He dropped from the top place, Richter and Kamensky passed him and Nepejchal’s destiny was bronze medal.

Audience recognized Richter starting to laugh or at least his smiled and waved his hand when the announcer told that he had won quota during the competition. I must admit that I was sure that he can’t concentrate any more after that information, but fortunately I was wrong.

After the end of the match Richter was surrounded by his team mates and friends for a long time.

Twenty three teams competed in Trap Mixed Team competition today in Minsk. After the Qualification four best teams reached the places to the medal matches – two best into the gold and two following to the bronze match.

Yesterday Spanish Fatima Galvez had beat two Finns and won the Quota place to Tokyo. Her flow also continued nicely to today and she lead with her team mate Antonio Bailon their team to the victory by beating Italy 1 (Rossi-Pellielo) with the difference of four targets with result 44-40.

In the bronze match, match before the gold match, Russian Federation beat Italy 2 (Stanco-Grazini) with result 45-43. Yesterday was Italian day with double victory, but unfortunately not today. Today was the day of Spain and Fatima Galvez and Antonio Bailon and I’m sure that today will belong in the memories of Fatima’s best competition journeys.