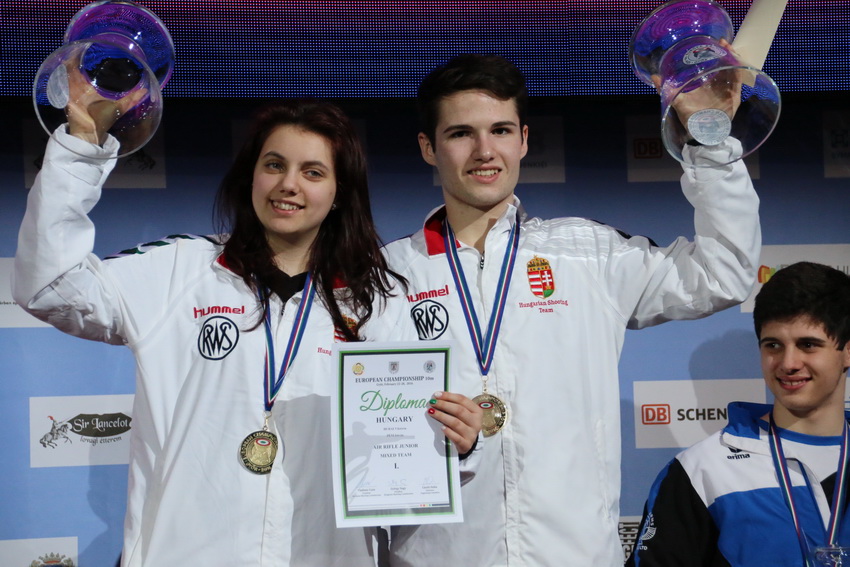 The end of the second competition day the 25th of February was triumph of hosting country Hungary.

Mixed Team competition in Air Rifle and Air Pistol had the official “label” of European Championship for first time in Györ.

These competitions were taken as official events after their successful debut at the 1st European Games in Baku. The Teams consist of a female and a male athlete. In Györ this event showed that it will interest junior athletes while in both events there were teams from twenty countries.

Through the Qualification eight best teams had been qualified to the final events in air rifle and air pistol. The finals in Air rifle had organized in two part: four teams in each parts. The qualified teams were: Nederland, Hungary, Turkey, Croatia, Serbia, Israel, Russian Federation and Switzerland. The best from the four teams groups received the place into the Gold Match and the second best to the Bronze Match. The winner of the first set was Hungary who beat Netherland: Hungary to the Gold Match and Netherland to the Bronze Match.

In the second set Switzerland won Israel and continued to the Gold Match and Israel continued to compete from bronze. The winner of the medal matches is the team who first achieves 5 points.

The Bronze Match was triumph of Team Israel while it was superior by winning Netherland with result 5-0.

In the Gold Match met Hungary and Switzerland. It looked like that Switzerland would take the gold medals while it was leading after 6th shots already 4-2 when Hungarian athletes woke up to battle. Hungary won the next shot, situation 4-3 for Swiss team. In the next shot both teams achieved an equal result 20.6 – not any point for each. Hungary won the next shot, situation 4-4. The last shot: Swiss Team shot 10.2 and 10.0, Hungarian team 10.0 and finally 10.6. The first European Championship of Air Rifle Mixed Teams stayed in Hungary with result 5-4. The Golden Hungarian team consisted of Viktoria Hurai and Istvan Peni.

Into the Pistol Mixed Teams competition competed in the same way. Italy, France, Poland, Russian Federation, Croatia, Hungary, Slovenia and Slovakia had been qualified to the final event.

In the first set Poland was the best and continued to the Gold Match and Russian Federation reached the place into the Bronze Match. The winner of the second set was surprisingly Hungary again when they beat Slovenia.

The Bronze Match continued very tight into end. Situation was 4-4 before the last shot. Russian Margarita Lomova and Artem Cherhousov shot both 10.2 when Slovenian Jagoda Tkalec and Joze Ceper could reach only 8.7 and 9.9. Bronze medals travelled to Russian Federation.

In the Gold Match the team of Poland (Agata Nowak/Patryk Sakowski) and Hungary (Veronika Major/Istvan Peni). When six shots had been shot the situation was equal 3-3. Hungary won the next shot, then Poland the next one: 4-4. Last shot: Polish athletes achieved 9.5 and 10.1. After few seconds the score board told the results of the Hungarian team: 10.6 and 10.2. Hungary won the first European Championship in Air Pistol Mixed Team competition with result 5-4. The historical double golden party of Hungary was ready to start. That was a splendid day for the hosting country!