“It was a dark and stormy night when….” 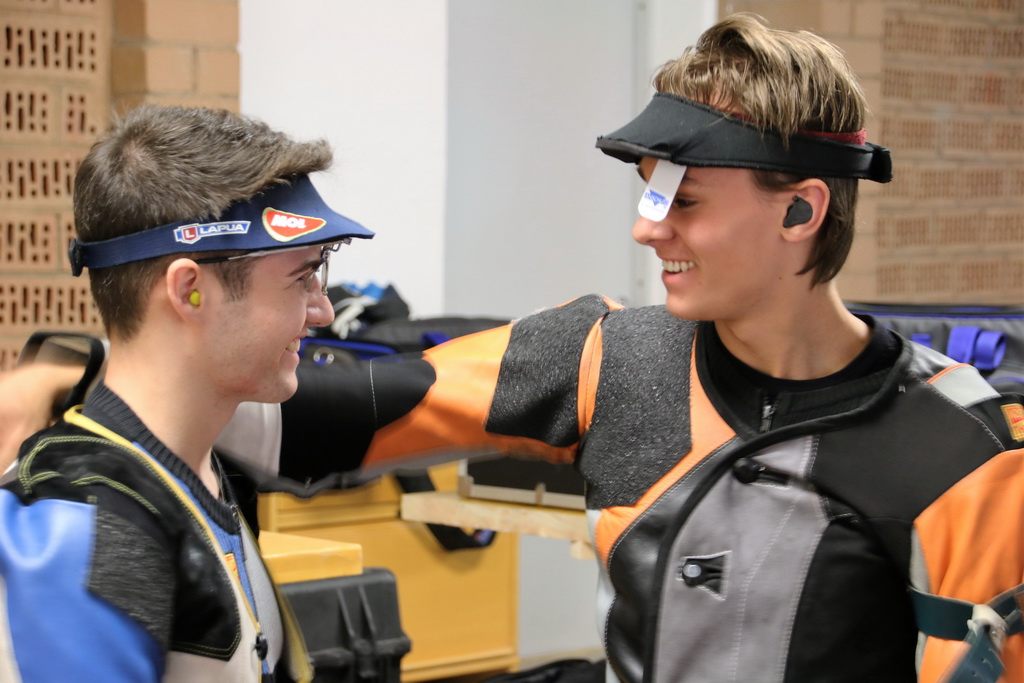 The third competition day (Thursday 16th June) woke up slowly after the midnight heavy rain. We can say like Snoopy said in Peanuts cartoon: “It was a dark and stormy night when…”.

Anyway when hopping out from the bus at Männiku Shooting Centre, the nature smelled fresh and you could feel calmness. Thin mist arose from the ground. Sky was grey but it was warm – the best weather for rifle shooters. Athletes walked on their firing places very concentrated. Looks like Männiku would sleep still but start waking up soon.

The European Championship continued with 25m Pistol Women Junior with Precision stage, the Rapid stage will be competed tomorrow. Men Juniors had the 50m Pistol and the 50m Rifle Prone Competitions.

After the qualification competition, when team results were counted together, the score board of the rifle range told that it was Switzerland who won the team European Championship in 50m Rifle Men Junior. Their result was 1856.3. They beat Norway with 1.2 points (1855.1) and the third was the team of Croatia (1848.1).

The best of the 50m rifle prone qualification was Dragomir Iordache (ROU) with the result 624.9. The second was Hungarian Istvan Peni (624.1) and third – Norwegian Henrik Larsen 621.4. But as we all know the finals will be an own competition starting from zero.

And so it was also today. From the very beginning Hungarian Istvan Peni, who has achieved also a quota place to Rio Olympics, showed his strength at the finals by taking the leading position immediately after the three first shot. He did not ever give up that position during the finals. But just behind him there was quite lot traffic. Karlsen, Holko, Iordache (WR holder) changed their positions quite often. After 13th shot Filip Smol from Poland started to climb up on the ranking list. Fist he dropped Romanian Iordache and finally he dropped Norwegian Karlsen behind him and won the silver medal. Karlsen won bronze with result of 185.5. Karlsen shot 9.5 and 9.8 when Smol shot 10.2. and 10.

During the last two shots did not happen anything special. Smol could not achieve Peni´s lead. Istvan Peni(HUN) won European Championship with result 209.0 which is only 0.1 less than the current World Record. Silver medal was won today with result 206.1

“In the morning we had luckily quite solid wind and I could solve it easily. I shot very quickly while I thought that it might start to rain. The qualification was good, I had only four nines (9,9) so I was very satisfied for the result. I wasn’t nervous for the finals at all. My hands were so stable today, and I thought that I can´t miss the Championship. It was perfectly. During the finals I said to myself “Take it easy, you have so much advantage that the game will be mine”. I thought that there could be possible for World Record but unfortunately I left 0.1. behind it”, described satisfied 19 years old European Champion.

At the TV interview he told he tried to compete as much as possible and this competition worked well for preparation to the Rio Olympics.

“I wanted to test how much I can shoot in the finals. After this I will have physical training for few weeks. Then I`ll fly to Norway for training with Henrik Larsen who was also at the finals today and then Olympic Games will come”, told Istavan Peni. We wish good luck him to Rio!

Simon Weiss proved that there is not any meaning in which place you are at the qualification, but the most important point is that you belong among the eight best shooters at qualification. So it was also today. Simon Weiss was on 6th position after qualification this morning before starting the finals.

Weiss started slowly improving his shooting into end. Well, honestly we must say that he has still something (3 shots) also to improve. He shot in to the fourth shot 7.8 and to 15th shot only 6.8 points and 18th shot 7.9 points. That last one was a dangerous place to do so. Well, he had a 2.7 points advance before 15th shot. But after these two mistakes they suddenly were in deuce with Russian Artem Chernousov (166.7).

What a final! Two shots to go! Chernousov shoots 9.9 and Weiss 9.4 points. Situation has turned around. Last shot Weiss 9.4 points and what happens to Chernousov – he collapses and lost championship with 7.2 result. Weiss rushes to the gold medal!

“It was very difficult for me to shoot while there were so many excellent shooters from other countries but you have to have “clear head” and know what to do. I managed to do it during the last minute. I was really very lucky to handle this”, said new European Champion with happy look on his face.

After the Precision stage on leading position is Russian Margarita Lomova with result 290, her series were 97,97, 96 and she is leading by two points before Bulgarian Miroslava Mincheva who shot 288 ( 95, 95, 97) (9 inner tens). With the same result there is Silvie Ziskalova from Czech Republic (9 inner tens) and Russian Irina Serebryanskaya is following with same result 288 and with 7 inner tens.

“It was a good result for me”, told Lomova when returning from 25m range.

The 25m Pistol Women Junior competition will continue tomorrow with the Rapid stage.