Italian Deborah Gelisio is the best in qualifications and finals 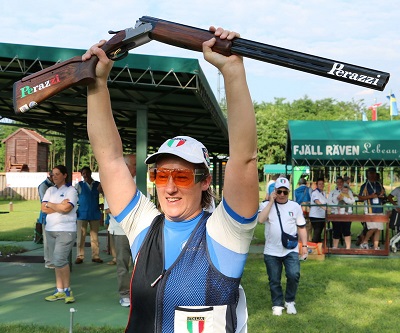 Italian Deborah Gelisio was the best in Trap women qualification competition. She shot result 73 (25+23+25). Her last series were perfect 25 like in the beginning. Katrin Quooss shot into the second series fully 25, but in third series she missed two clays. Slovakian Zuzana Stefesekova shot the same result 72 as Quooss (GER) (24+25+23), but she finished her qualification with result of 24. French Carole Cormenier reached also directly to the finals with result of 71 (24+22+25) after fine last full 25 series.

At Shoot off Mrs. Fortuna did not show her best cards to German Christiane Goehring who failed at the first shoot off target.

In the first part of the finals German Katrin Quooss failed only twice and shot the result 13 target from 15 targets. The second was Italian Deborah Gelisio with result of 11. These two cleared their road to the gold match.

Briton Abbey Burton booked a place in the bronze match who lost the gold place with one target. Her result was 10. Zuzana Stefecekova(SVK) was the second for the bronze match.

In the bronze match Burton started strong by managing in 8 first targets when Stefecekova failed in the second and sixth target. It looked that Burton would take the bronze but then started her difficulties; ninth failed target, 11th, 12th failed and also the 15th was failed. Her result was 11. When Burton missed her targets Stefecekova shot strongly and failed only once. Her result 12 reached for the bronze.

In the Gold match Italian Deborah Gelisio started strongly, she shot 10 targets perfectly and in the last target she failed only twice. Quooss shot also her start strongly but in the middle she failed twice. She failed also in the 12th target and in the last one. Gelisio won gold with result 13-11.

“No, I was not nervous. I did everything as I did when I won my World Championship and my coach asked me to do my best. I believe my coach and me did our best. Well, next step is the World Cup in Beijing and probably Granada World Championships, if my coach thinks that I’m good enough”, joked happy Deborah Gelisio during congratulations after the match.