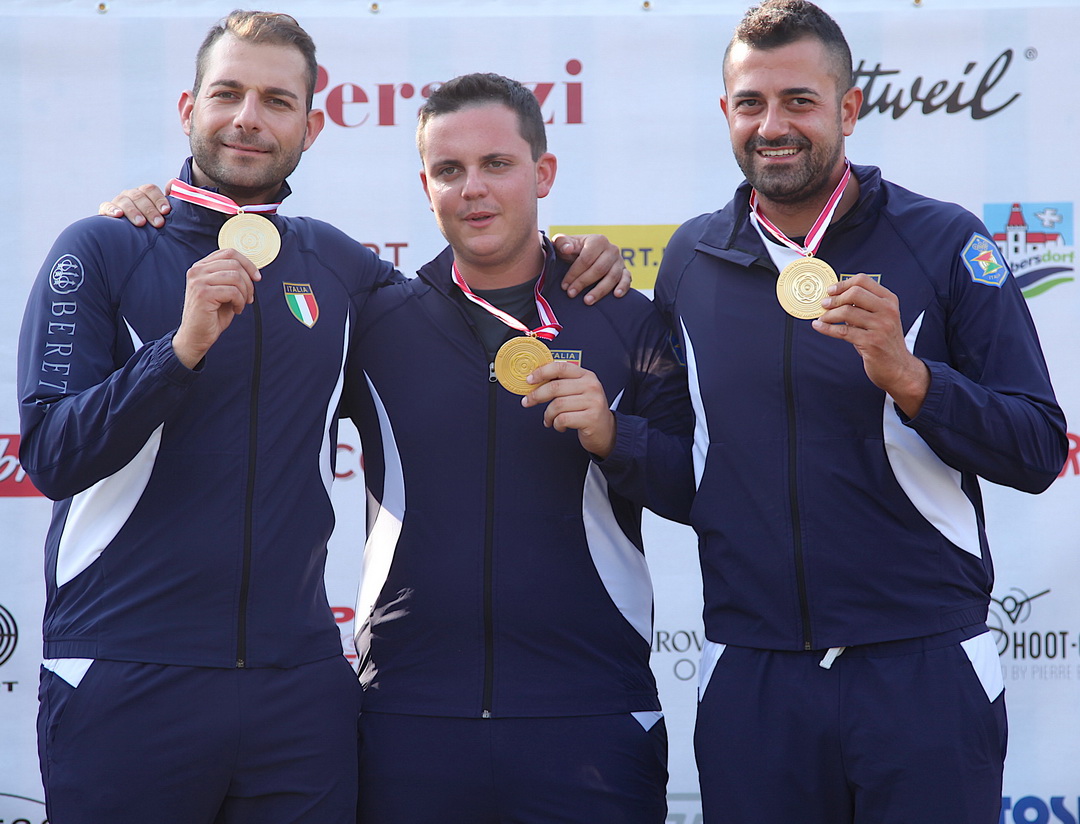 In the Double Trap Women Italian Claudia De Luca was superior by shooting a new World record which is now 131. Zuzana Rehak Stefecekova won silver medal, but she lost the gold with 12 targets. The result of Zuzana was 119. From the bronze medal it was needed shoot off while Italian Sofia Maglio and Finnish Mopsi Veromaa shot same result 114. Third was Sofia Maglio from Italy who won in shoot off Finnish Mopsi Veromaa 2-1.

In the Double Trap Mixed Team competition was shot in end of the day. After the Qualification following teams competed in the final: Italy 2, Slovakia, Italy 1, Cyprus, Hungary and Austria 1. The number of clays is totally 80 clays. Every shooter shoot in his/her time 5 two clays sets (10 clays) and then the change is done between team mates. After 30 clays starts the elimination rounds; after every next ten clays the team who has fewer points will drop out. In the end there are finally two best teams left.

In the beginning the both Italian teams started strongly but same did Team Slovakia, all three missed only clay. In the second round Slovakia made 3 single misses and same did Italy 1, but Italy 2 missed only one single clay and took the lead.

When the elimination round started after 30 clays, the Hungarian team was the first dropped out and took the 6th position (20), both Italian teams were leading with the result of 24. Slovakia was one clay behind 23.

During next round Austria dropped and took the 5th place with result 23. Italy 1 had taken the lead while Italy2 missed two clays. Slovakia was still third. When half of the clays (40) started the Slovakian attack; they hit next 10 clays perfectly and took the lead; Cyprus received 37 hits and they have to admit the 4th place. During the next 10 clays Slovakia continued prefect hits and it was turn of Italy 1 to say good bye. There were 20 clays still left, Sloavkia had after 60 clays 50 hits and Italy 2 had 48. During the last clays Slovakia managed to make 17 hit instead of Italian 15 hits. Match was clear and Slovakian team won Italy 2 with result 67-63. The Slovakian team consisted of Zuzana Rehak Stefecekova and Hubert Andzej Olejnik and they were crowned for the first time in the shooting sport history as European Champions.

In the Men’s team competition Italy took the victory with result of 415. The team consisted of Antonino Barilla (146), Ignazio Maria Tronca (135) and Alessandro Chanese (134).

Silver medal team was Russian Federation (393) and bronze medallist Austria (299). The men’s team results were build up by counting the qualification results together.

The competition will continue on Friday with Skeet events.