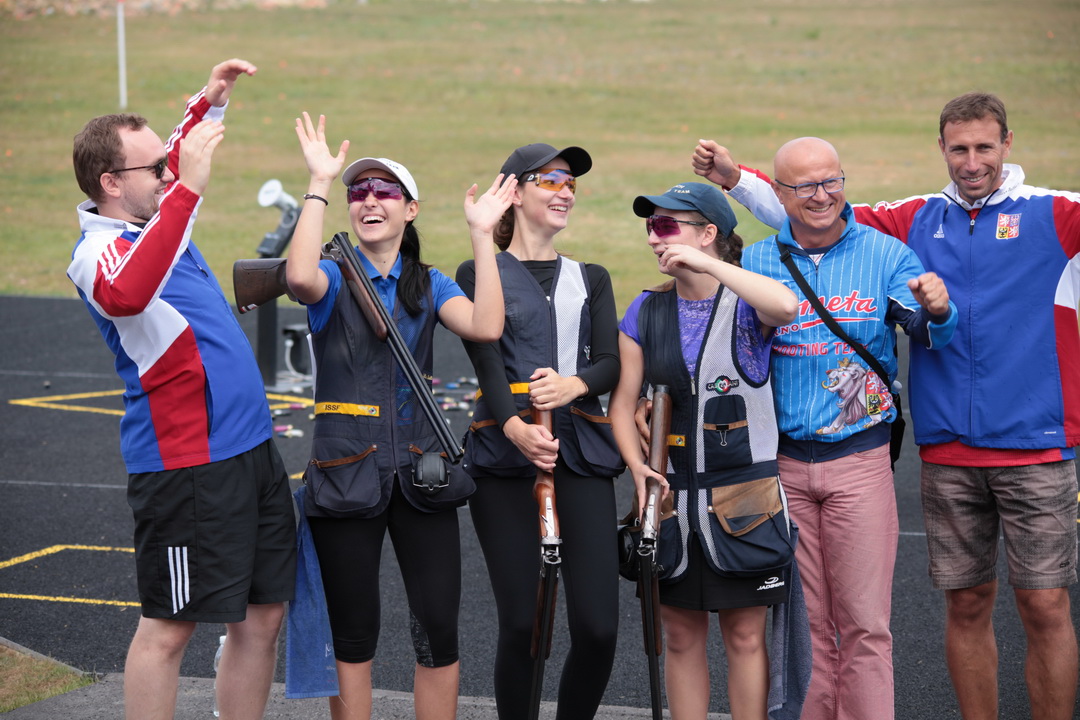 Today, on Saturday it was the turn of the Team Competitions. The weather was first time mild and cloudy, only +18 C in the morning. The weather forecast promised maximum +27C, perfect day for shooting.

In the Skeet Men Junior team competition there will compete eight best teams. The teams who received the final place from qualification to Skeet Junior Men team competition were Czech Republic (360), with a new Qualification European Record Juniors, Italy (353), Russian Federation (339), Turkey (338), Cyprus (336), Germany (335), France (328) and Hungary (318). The new European Qualification record is now 360 and the teams, who made it consisted of Richard Klika (123), Daniel Korcak (119) and Jaroslav Lang (118).

In the quarterfinals the winner of Qualification Czech Republic will compete against 8th Hungary, Italy meets France, Russian Federation meets Germany and Turkey competes with Cyprus.

In the first quarters the pair was Czech Republic and Hungary; Czech team won with result 48-38. In the second Russian Federation was better and won Germany 50-48 and Cyprus won Turkey 44-46. Italy went directly to the semi-finals while one of the French team has got ill and couldn´t compete at all.

In the semi-final Czech team was stronger when meeting Cyprus team. Czechs won 55-46. In the other semi-final Italy took a very tight victory from Russian Federation with result 51-50.

In the bronze match met Russian team and Cyprus Team. The match was tight and it solved during the last target to victory Russian Federation. Their victory result was 47-46.

In the Skeet Women Junior there were only four teams and they go directly to semifinals. The competing pairs are Russian Federation and Slovakia, Germany and Czech Republic. Russian team result 327 is also a new Qualification European Record Junior. The team of the Russian Federation consisted of Zilia Batyrshina (116), Anna Zhadnova (106) and Elena Bukhonova (105).

In the first semi-final of the Skeet Women Junior team competition Russian Federation and Slovakia had a tight match. Russian team won it with difference of one target and entered to the gold match, Slovakia to bronze match. The result was for Russian team 43-42. In the second semi-final Czech Republic did not give any possibilities to Germany by winning 43-39.

The bronze match (GER-SVK) finished with result 37-37 and it was needed a shoot off. In the shoot off Germany was sharper and won it 6-5, bronze medals to Germany, Slovakia was fourth.

In the gold match competed Russian Federation and Czech Republic. The gold winner was Czech Republic with result of 42-40. The team consisted of Pavla Mrnova, Anna Sindelarova and Zuzana Zaoralova.