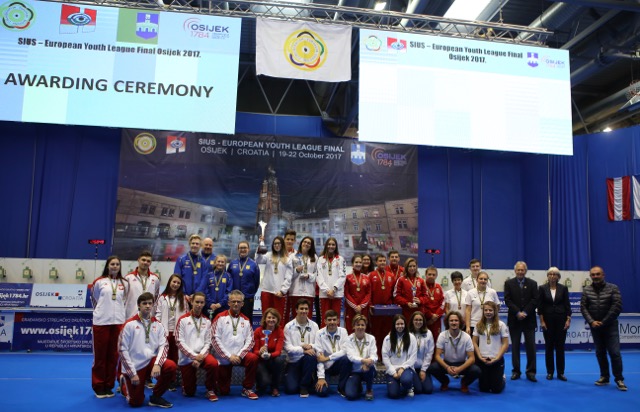 Young athletes from all over Europe gathered in Osijek/Croatia during the weekend of 19-22 October 2017 to celebrate the Final of the 9th edition of the SIUS European Youth League.

The Shooting Club GSD Osijek 1784 and the very experienced Organizing Committee under the leadership of Zoran Celic had prepared perfect conditions for the athletes. At the same time the Final was an early rehearsal for the 10m European Championship 2019 that also will take place in the Sport hall “GRADSKI VRT” in Osijek. For the very first time the Medal matches were excellently live streamed on the internet.

Since the beginning of the year athletes of 14-18 years of age have participated at different elimination and qualification competitions to reach the desirable Final. In the Air Rifle event the participants were from Austria, France, Hungary, Italy, Norway, Serbia, Sweden and the host federation Croatia. The Air Pistol competitors came from Czech Republic, France, Italy, Latvia, Poland, Sweden, Ukraine and the host country Croatia.

The EYL is a mixed team competition, a fight head to head for the 3 team members and the teams must be composed of both genders. This time 33 girls and 29 boys from 12 different countries participated. After the first 2 days of competition in 2 groups, with 3 matches for each team, the 4 best teams qualified for the Bronze and Gold matches on Sunday.

The pistol teams of Italy and Poland won all qualification matches in Group 1 and 2 respectively and so met in the Gold Medal match on Sunday. The Polish athletes were fighting hard but half way into the match Italy was already in the lead with 4 points, out of 120. Which of course would not be impossible to catch up with, but the Italian team was very strong and at the end they won with 68 against 52 for Poland.

The Bronze Medal match between France and Sweden was won by the young French athletes in a very convincing way with 77-43, leading the match from the very first shot. The Swedish team was not too unhappy with the result anyway. With extremely short notice they decided to come to Osijek as a substitute team. Reaching the Bronze Medal Match was in a way a victory for them under these circumstances.

The Rifle event was more open during the qualification. It was not until the last series on Saturday that it was decided which teams would enter the Medal Matches on Sunday. The Gold Medal Match took place between Hungary and Sweden, while Serbia and France competed for the Bronze medals. The Gold match was in the hands of the Hungarian team from the very start with a result of 71 match points for Hungary and 49 for Sweden. The Bronze match was a bit more exciting but at the end the Serbian athletes secured the victory with 64 match points against 56 for France.

In addition to the EYL Medals the teams entering the podium also received a special trophy offered by the Organizing Committee. The ESC challenge trophies will now stay in Italy and Hungary respectively till the EYL Final 2018. The teams on the podium also received the special gifts from the ESC President Mr Vladimir Lisin in the form of 1-2-3 SIUS Hybridescore targets for the teams placing 3-2-1.

The ESC is most grateful to the Shooting Club GSD Osijek 1784 and the Croatian Shooting Federation for the excellent conduct of the Final and the warm hospitality. We would also like to thank the young athletes and their coaches for great performance in the spirit of friendship and fair play. A special “thank you” goes not only to the Swedish pistol team but also to the Austrian rifle team that joined the competition with short notice after the Russian teams cancelled their participation.

The ESC welcomes all European Federations to the EYL 2018 ending with the Final taking place in Kisakallio in Finland.