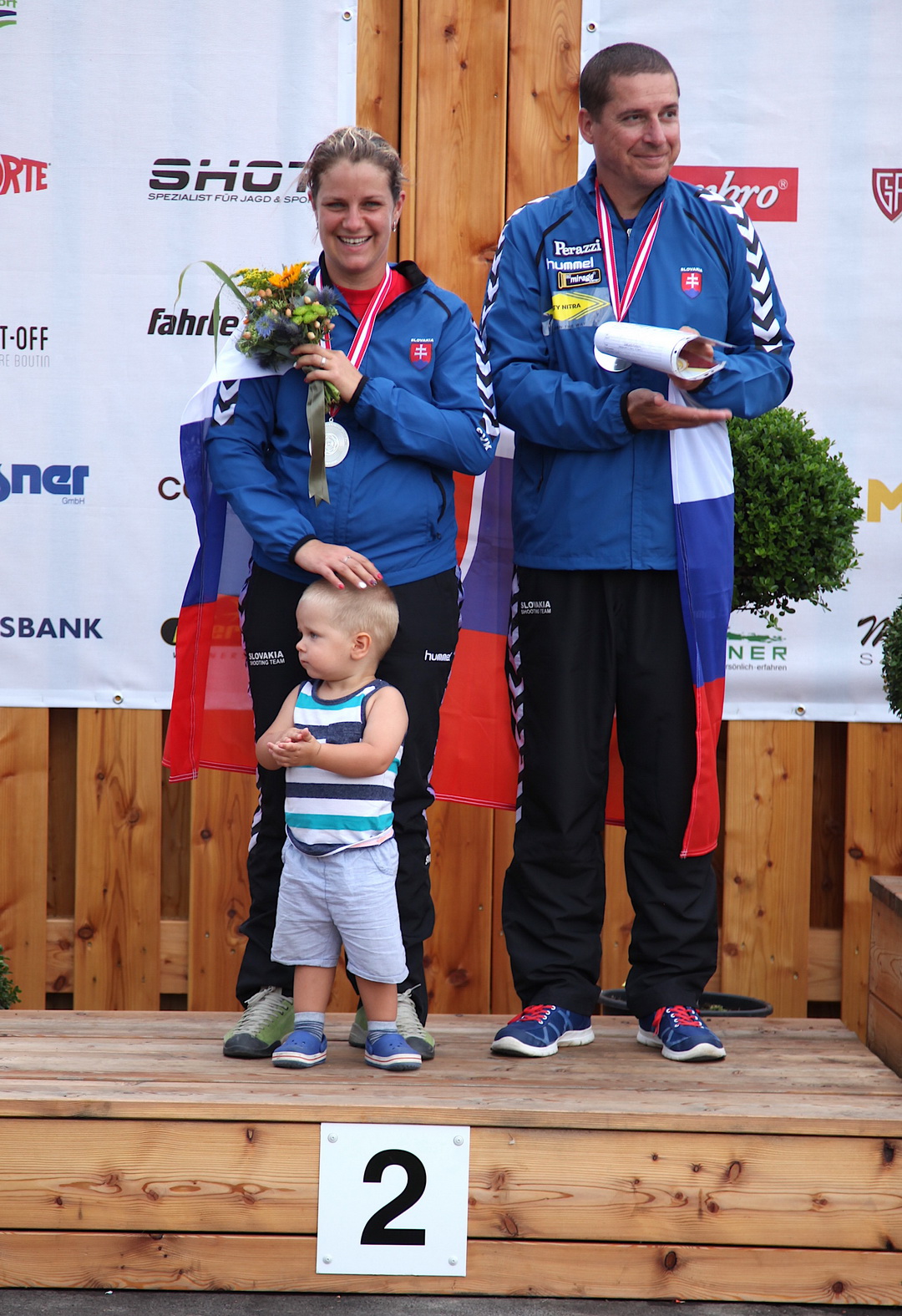 Sunday morning felt a little cooler than morning before when waking up and walking to have breakfast. But when the sun arose enough high the temperature climbed up quickly over +32 C. During the afternoon grey clouds started to sail in the sky. When I started to write this story, the clouds had changed darker. There has seen lightnings in the horizon and the wind brought the sound of thunder. Fortunately, the thunder storm did not come nearer.

27 teams from 17 countries took part in this Mixed Team Competition and the number of Junior Mixed Teams was 14 from 11 countries. The team consists of a female and male athlete and athletes will shoot three times 25 targets each in qualification, so the total score can be 150. After the qualification six best teams will shoot the final. One athlete shoots five targets and then it will be the team mates turn to shoot five targets. Athletes shoot 25 targets each.

The difference of normal round is that the team coaches can use one minute’s time out once during the final.

After the qualification Finland 1, Italy 2 and Spain 1 had hit 145 targets and after Shoot off the best of the qualification Spain was best, Italy second and Finland third. Their result was Equal World and European Qualification record. The fourth finalist team was Slovakia 2 with result 144, fifth finalist was Turkey 143. Great Britain 2, Italy 1 and France 2 had hit 142 and they needed shoot off. British team 2 won the shoot off and took the last final place.

Italian team started shooting by Giovanni Pellielo, he managed perfect by breaking all 5 targets. Into the same result received Slovakia. Their starter was Zuzana Rehak Stefecekova. The other team made one or more misses. New shooters, in this time from Italy entered Jessica Rossi on stage. Her performance was nearly as perfect as Pellielo’s – only one miss.

Italy continued their strong performance. In the first target of fifth round happened to Pellielo a miracle – small negative on- he missed. Italy performance was superior, during the whole final competition they only three times. Bellisima! The victory result was 47/50 which is also new World and European record! The winner of silver medal was Slovakia with team Zuzana Rehak

Stefecekova and Eric Varga, who also made a strong performance and kept Turkish Team behind.

Bronze medals travelled to Turkey, their team consisted of Safiye Sariturk and Oguzhan Tuzun. The bronze result was 29.

The six best teams which had received their place into the evening final were Italy 1, France, Germany 2, Russian Federation, Spain and Germany 1.

In this finals all first shooter were male. France started by shooting all five targets. Russian Federation Dmitrii Isaev was a little bit nervous and missed one. France took the lead after first round. In the second round Daria Semianova was only who hit all five targets. It was quite clear that from the victory there was only fighting Russian Federation and Italy, so strong were their performance during the following rounds. It looked that Russia is safe and take a clear victory but everything can happen and the competition is ended when the last shot has been done. Russian light weak moment happened in the seventh, eighth and ninth rounds when Isaev and Semianova made couple of misses. It was lucky that Russian team had shot strong first half while Italy made also strong shooting. When six last targets were left, situation was even. Russian Isaev and Semianova managed to hit all when Italians missed twice, that was the end of the match and Russian Federation could celebrate gold and European Championship with result of 38. The Russian team consisted of Daria Semianova and Dmitrii Isaev. In the Silver medal team performanced Sofia Littame and Matteo Margongiu, silver result was 36. The bronze medals travelled to France (26) with Loemy Recasens and Clement Francis Andre Bourgue.

The Championships will continue with Double Trap and Skeet events.