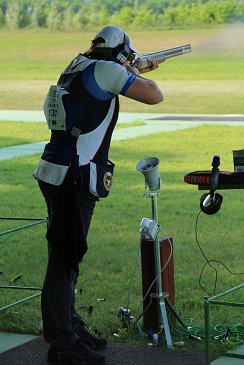 Teams of Italy had not only luck but also skill when they won two gold medals today in Trap women and women junior team competitions. In women team competition they shot the same result as Germany, but when counting the last series Italy’s result was 69 against Germany’s 67. The team Italy consisted of Deborah Gelisio (73), Jessica Rossi (69) and Federica Capororuscio (62). The gold and silver medal results were 204.

Italian women juniors won also gold in their team competition, but they won gold with the same way as women did. Now Italian team beat Russia when they had better last series (69). The winning result was 202. The team of Italy consisted of Alessia Iezzi (70), Valeria Raffaelli (69) and Lisa Nicole Marzo (63). The winner of bronze was Turkey with the result of 182.

Italian Deborah Gelisio was the best in Trap women qualification competition. She shot result 73 (25+23+25) Her last series was perfect 25 like in the beginning. Katrin Quooss shot into the second series fully 25, but in third series she missed two clays. Slovakian Zuzana Stefesekova shot the same result 72 as Quooss (GER) (24+25+23), but she finished her qualification with result of 24. French Carole Cormenier reached also directly to the finals with result of 71 (24+22+25) after fine last fully 25 series.

Three Russian, two Italian and one Turkish women junior athlete are in the finals

The finals will be a new competition and nothing is not yet clear.