Kizyma and Major on the way to the gold 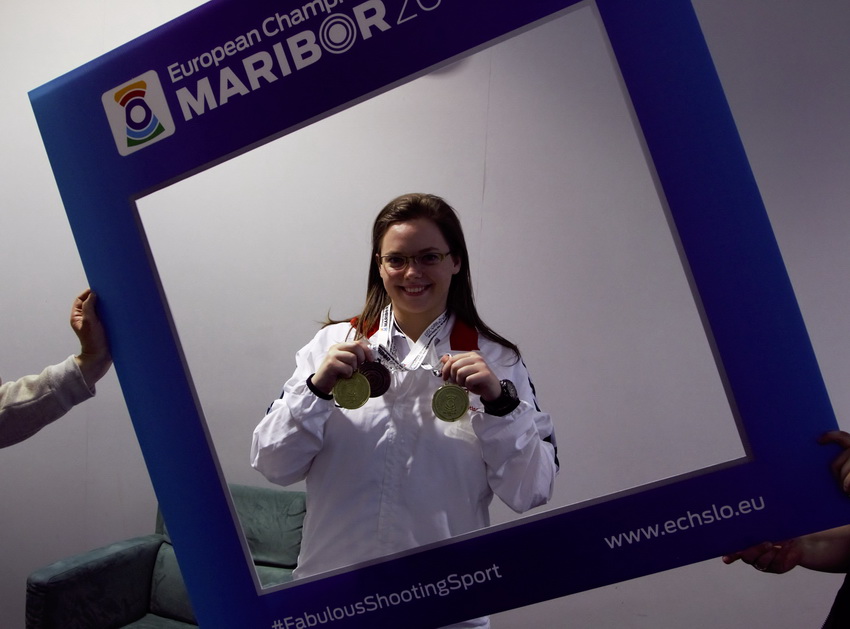 In first Semi-finals of the Running Target Men Junior event (30+30) met Ihor Kizyma (UKR) and Kris Grossheim (GER). In that exciting final Kizyma was better with the result of 7-5 and took the place to the gold match, Kris Grossheim continued in bronze match. In the second Semi-final competed Nicolas Tranchant (FRA) and Maksym Babushok (UKR). Ukrainian Babuskok won with the same result (7-5) as Kizyma and met him in the gold match.

Gold match was a duel of two Ukrainian athletes Kizyma and Babushok. In that match Kizyma won the first shot, but Babushok won two next shots. After sixth shots the duel was even 3-3. Then Kizyma showed his strength by winning three last shots and he won European Championship with the result of 6-3.

Veronika Major is a major star

Veronika Major will surely remember this day for a long time. We can honestly say that she is multi talent star. Two golden medals in totally different events during one day plus one bronze medal in Team event – super!

After the Air Pistol finals she (Major) rushed to shoot Running Target. She cleared her road to Semi-finals and in that competition she was the only favourite for gold. In the first Semi-final Major bet Russian Natalia Pochatkova fantastically 6-2 and entered the gold match. In the second Semi-final match competed two Russian athletes Kseniia Anufrieva and Anna Kostina. Their duel was very exciting and finished with the result of 10-8 for Anufieva. Anufrieva entered to the gold match where she competed against Veronika Major.

Veronika Major was superior also in the gold match and didn’t give any chances to Anufirera by beating her with the result of 6-1. The bronze travelled to Russia with Anna Kostina while she has beaten Natalia Pochatkova with the result of 10-8.

«My plan was to win a medal, but of course when it is golden one I’m happy», told Major after the gold match.

In the RT Women Junior team event the golden team was Russian Federation which consisted of Kseniia Anufrieva, Anna Kostina and Natalia Pochatkova. Their winning result was 1086. Silver team was Ukraine and bronze team was Hungary.

European Shooting Confederation wants to modern the shooting sport strongly. That is why it has created new type of team competition. It was competed in Air Rifle Men Junior and Air Pistol Women Junior.

Team consists of three athletes. In this event there is Qualification, Quarterfinals and Semi-finals plus bronze match and gold match. The team having higher total score per shot gets 2 points and if their results are even, then both teams get one point. In Finals and medal matches the winner team is the team who has earned 21 points first.

The winner of Air Rifle Men Junior Team Test event was Hungary after very exciting moments, having beating Croatia with the result of 21-19. The situation before last shots was even 19-19. Istvan Peni managed to shoot in his last shot 10.9 and the team result became 31.7 when Croatia managed to achieve 30.7. The Hungarian team consisted of Istvan Peni, Peter Vas and Csaba Covacs. Croatia won silver and Russian Federation won bronze by beating Germany in the bronze match.

In Air Pistol Women Junior Team Test event the best was Sweden who bet Germany with the result of 22-12. Italy won bronze by beating France 22-16. The team of Sweden consisted of Rebecka Andersson, Josefine Thoernkvist and Ida Abrahamsson.

«We followed all the time how our teammates managed to shoot. Of course when you are following other and you know their results it grows more stress but it was fun. Absolutely this kind of competition is more attractive while there are more exciting moments. We support this», told the Swedish team.

Istvan Peni liked also the event even the competition day was long.

«It was a positive experience but quite hard. It is more exciting to compete as a team than alone. You have to follow others and you have to do all the time your best to win the points. Of course it is nice to win but winning together means also more fun», explained Istvan Peni.