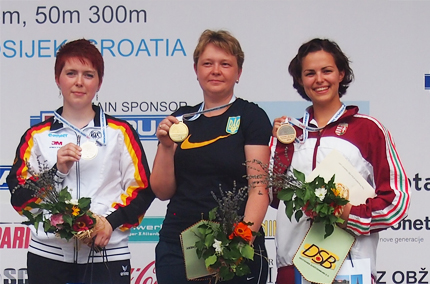 Thursday is the ladies’ day while today there are only Women or Women Junior events in Osijek.

The morning started with 25m Pistol Women sighting stage and continued later in the afternoon with the Rapid Fire stage.

The 50m Rifle Prone Women competition started 50 min later. There are no finals in this event, so this is the only possibility to perform the best way. Women Junior Prone events will take place later in afternoon.

The individual scores/results of three athletes per nation are counted into team competition. The team competition that was competed this morning was probably the tightest competition ever in the history of European Championships.

The gold medal became clear only after checking the number of inner tens, Ukraine and Germany having the same final result - 1767 points. The team of Ukraine won the gold medal while they shot 100 inner tens and Germany - only 99.

Poland won the bronze medal also with a higher number of inner tens than Sweden. Polish athletes received 94 inner tens against Swedish 87 inner tens. Both teams received the result of 1764.

The statement that the Pampas Shooting Center would be the place of records proved to be true. This could also be seen today when the Ukrainian Natallia Kalysh finished her shooting with the result of 597 in 50 m Rifle Prone Women. This is an equal World and European record! The difference between this result and that of the silver medallist German Ramona Goessler (595) was two points. The winner of the bronze medal was Kata Veres from Hungary with the result of 593.

When the women finished their competition, the women juniors entered on stage in 50m Rifle Prone.

The winner of gold was clear, it was Germany with result 1764, but the following medal teams had the same result - 1762.

Finally, the winner of the silver medal was Norway with 96 inner tens, while France had 93 inner tens.

The individual competition was the glory of the French Emilie Wintenberger. She won the European Championship gold with the difference of two points (594).

The Norwegian Malin Westerheim became the winner of silver medal today with the result of 592 points, 591 points were needed to get the bronze medal, which was won by Marisa Gregori.

25m Pistol Women medal matches of the Finals were the best shooting sport show ever.

When the medal match came to the point of the Semifinals, the spectators did not know what was coming.

In the semifinal four athletes competed - Munkhbayar DORJSUREN (GER), Sonia FRANQUET (ESP), Monika Karsch (GER) and Heidi DIETHELM GERBER (SUI). Dorsjuren won her semifinal quite easily and entered the gold match with 15 points . But the other three athletes - Karsch, Diethelm Gerber and Frankuet - had the same the result of 14 points. The first athlete who was dropped out was Sonia Franquet. Then the battle for the other final place started. Karsch and Diethelm Gerber needed six shoot-offs to decide who will enter the gold match. Six shoot-offs: a lot of passion, concentration and skill. These two athletes made a real shooting sport show. Finally Heidi Diethelm Gerber won the hard match and entered the gold match.

While Dorsjuren entered the gold match quite easily, many people thought that this was for her. But Thurday was'nt her day while the Swiss Heidi DIETHELM GERBER won the gold match quite clearly 7-3. In the Bronze match Monika Karsch defeated Sonia Franquet clearly 8-4.

The Russian Federation was the best in 25m Pistol Women team event.

The Russian trio Anna MASTYANINA, Ekaterina KORSHUNOVA and Yuliya ALIPOVA won the gold medal with the difference of eight points, their result was 1743 points (Germany's result was 1735 points). The third and bronze medal winner was Serbia with the result of 1728 points.