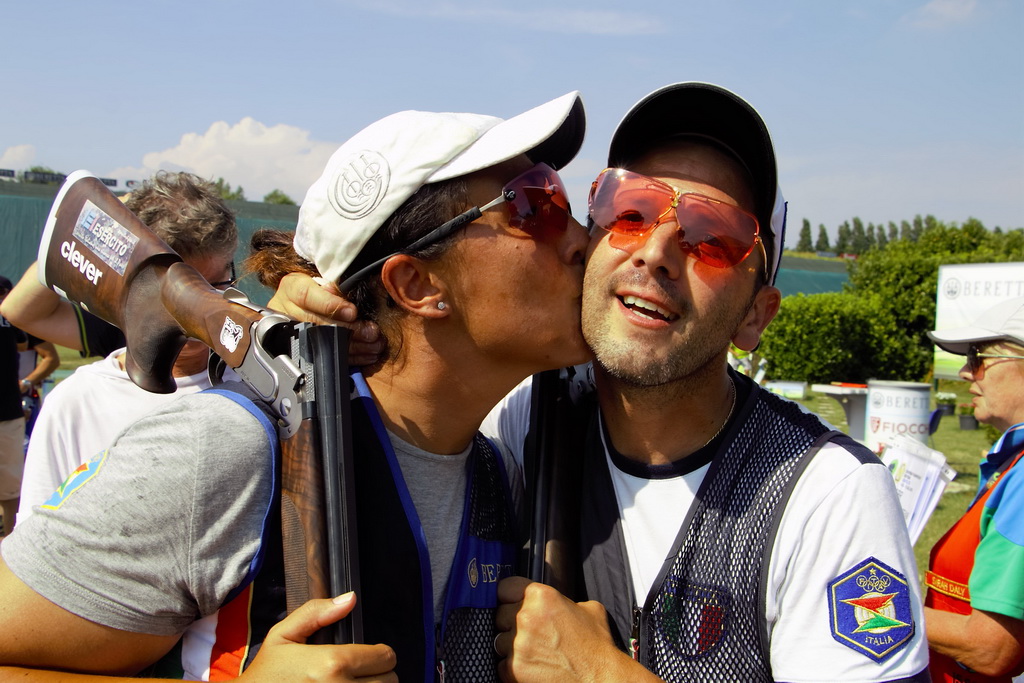 The first dropped outs from the part 1 was Azerbaijan and from the second – team of Cyprus.

In the bronze match Czech Republic did not give any possibility for Finland and won bronze with result of 30-25. In the gold match Italy was not so superior when in beforehand was thought. Italy won finally France with result of 25-24. In the Italian gold team shot Diana Bacosi and Riccardo Filippelli.

Mosin is the King of Double Trap

Vasily Mosin (RUS) started strongly the Double Trap Men competition by winning the Qualification. His result was 144. The second in Qualification was British Matthew John Coward-Holley (139) with the same result as the 1999 and 2002 medallist Daniele Di Spigno (ITA). Into the finalists group achieved the place also Andreras Loew (GER), Tim Kneale(GBR) and Roland Gerebics (HUN).

The gold match was tight. Both athletes could show their skills even it has been a long day before the finals. The perfect day of Mosin continued always to the end of the gold match. No misses – Di Spigno unfortunately missed once and lost the gold.

“I feel very happy. The competition was good and this tournament is an excellent on the road to Rio. It is so nice to shoot here in Lonato Shooting Range; the range is fantastic, a lot of spectators, supporters and fans. This is great! Of course the competition always against best European athletes is hard but it is also fantastic”, admired European Champions the circumstances and feeling of Lonato. “Well, Rio, we will see in Rio. Now after this I relax a little bit but the training again. Until in Rio we know what shall happen, of course I try my best there”, enjoyed secretly Valily Mosin.

The Double Trap Men Team competition was a triumph of Great Britain. Their winning was 5 clays better (413) than the silver medal team Italy (408). The bronze medals travelled to Hungary.

In Double Trap Men Junior the Gold winner and European Champion was Nathan Lee Xuereb from Malta. He beat in the Gold Match Jacopo Dupre De Foresta with result 28-24. In the Bronze Match Russian Kamil Khusaenov was better than James Dedman and won bronze with result 27-25.

“This competition was not so easy because of the hot weather and of course because of the other good athletes. This is a beautiful range and I have an excellent shotgun. I can be only satisfied and happy when I’m here now. This is the day that I have been wanted. For me the coach is the most important thing, so thanks for him. This year is the last year in Juniors and next year I’ll shoot in Men’s event. My goal, of course, is to be European Champion and participate in to the World Championship”, explained his feelings and goals the European Champion Nathan Lee Xuereb from Malta.

The winner of the Double Trap Men Junior Team was the host country Italy. The winning result of Italy was 404. It beat the team of Great Britain (402) with difference of two clays. The bronze medal winner team was Russian Federation (393).

The Short Closing Ceremony was organised after the Awarding Ceremonies. In his greeting the President of the Trap Concaverde Mr. Ivan Carelle thanked all participants from fine sport atmosphere and wished all athletes welcome to the next Shotgun European Championship 2019 which will be also organised in Lonato. The Technical Delegate Mr. Petros Kyritsis thanked the Organising Committee for its friendly and great hospitality. He also thanked the international Jury Members, the Italian Range Officers and Referees. Mr. Carelli handed the flag of the European Shooting Confederation to the ESC Vice-President, Mrs. Kerstin Bodin who handed it forward to the Secretary General of Azerbaijan where the next all events ECH will be organised.

We only can say "Arrivederci Lonato, millè grazie Lonato!"