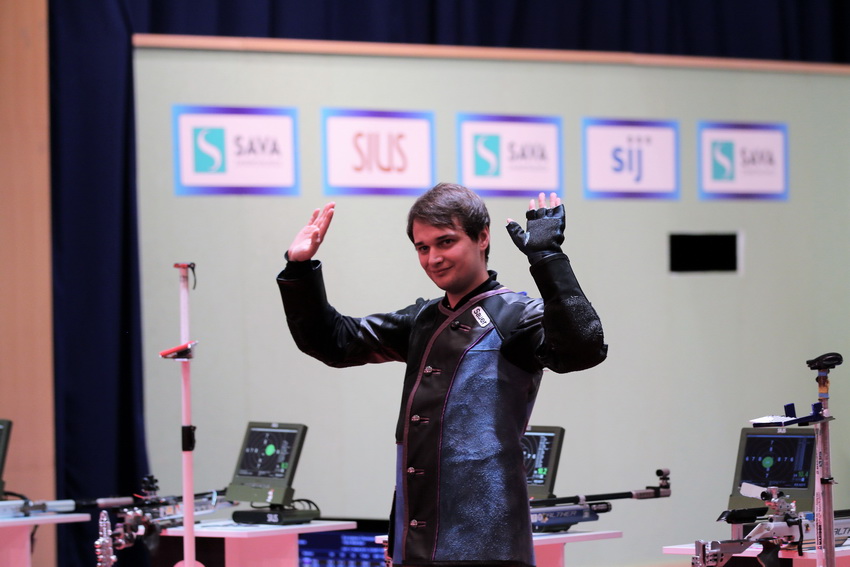 The Air Rifle was the last individual competition for men that competed in 10m ECH in Hotel Habakuk in Maribor. There were 67 athletes who participated into the Qualification competition. Vladimir Maslennikov won the qualification. His shooting was superior for sure. After the first 5 shots he took the top place and did not give it up. His winning result was 247.7 which is new World and European Record. He won with the difference of 2.8 point Ukrainian Oleh Tsarkov. The bronze medal winner was Alexis Raynaud from France who passed Italian Giuseppe Pio Capano during the 18th shot and won bronze medal with the difference 0.1 point before Capano who was finally fourth.Before the two last shots Maslennikov was leading by 2.4 points and that kind of leading is quite a lot in rifle. Maslennikov shot 10.5 and 10.4. and Tsarkov was beaten.

«I’m training a lot and preparing a lot for this Championship and I wanted to win very much a medal from this Championship while my last your position was fourth. And that was my only goal from this Championship. I follow the situation all the time from monitor and I didn’t have any reason to hesitate. Everything went today like in training. Next competition for is Munich Word Cup in which I start now to prepare». When asking Tokyo 2020 he only smiled mysteriously and answered: «There is a long road to go».