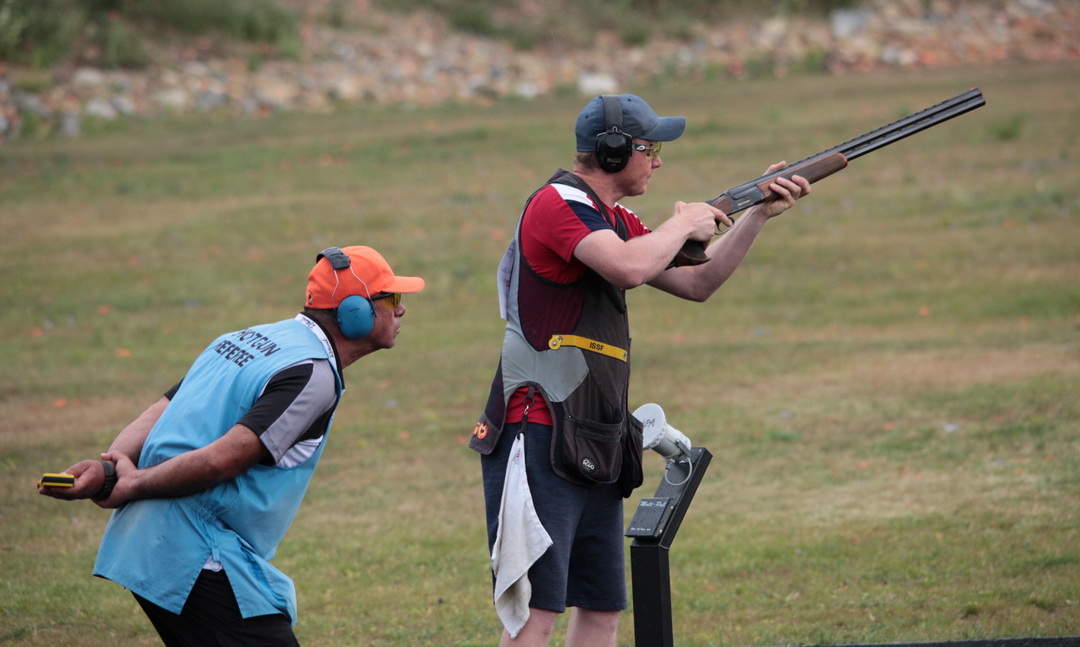 The Skeet athletes started their competition yesterday when they shot 50 targets. Today the temperature had sunk down till 25C and it was much convenient to continue with 75 targets.

Andri Eleftheriou from Cyprus was leading the Skeet Women after the first day. She had made a perfect day and hit all 50 targets. She was the only one who made 50. Swedish Victoria Larsson had hit 49 targets and British Amber Hill 48. Just one behind Hill breathed her team mate Elena Allen and French Lucie Anastassiou with result 47. Behind of Allen and Anastassiou there are five who shot 46 46 targets: Chiara Caneiro (ITA), Vanessa Hauff (GER), Katrin Wieslhuber (GER), Marjut Heinonen (FIN) and Panagiola Andreou (CYP).

Danka Bartekova is the Champion again

When the second day of the qualification had been competed the names had changed quite a lot. The best of the Qualification was French Lucie Anastassiou with result 120. Danka Bartekova(SVK), Victoria Larsson (SWE) and Panagiota Andreou shot 119. Chiara Caneiro (ITA) and German Nadine Messerschmidt were the last two who managed to reach into the final. Their result was 118.

The first shot of the final showed already the way of the finals. Swedish Victoria Larsson started strongly and she was leading and missed her first target after when shot 13 targets. The hardest competitors had misses one or two targets. But also this it showed that the competition is over when last shot has been shot. Larsson continued well, but French Lucie Anastassiou and Slovakian Danka Bartekova passed Larsson.

Bartekova misses 6 times, Anastassiou 8 and Larsson 7 times. Not only the number of misses is important but also the time when miss is important. Bartekova’s performance in the middle and until the two last target was very impressive. Her victory result 54 tells also her skills. Before the end of the competition the nature mother opened the sky and it started to rain.

“The competition was exciting, the conditions were crazy but I’m very happy my performance what I did. I didn’t looked at the scores on board during the finals. I tried to focus only my targets and few targets before the end I realized that there is a possibility to win the competition”, explained the European Champion Danka Bartekova her feelings.

After the first day there were five athletes who had full scores (50): Anton Astakhov (RUS), Emin Jafarov (AZE); Ben Llewellin (GBR), Tomas Nydrle (CZE) and Norwegian Erik Watndal. After these five athletes there are ten athletes who are only one clay behind with result 49. Totally 39 athletes are inside of three clay. When the whole qualification was competed, the best of qualification was German Sven Korte with result 124, second was Russian Alexander Zemlin. His result was 123. Same result shot Emin Jafarov from Azerbaijan and Stefan Nilsson from Sweden. The two last final places reached two Scandinavians: Erik Watndal 122 (NOR) and Jesper Hansen 122 (DEN).

Jesper Hansen proved again that the finals are an own competition when it starts from zero. Some way it was a negative miracle that there wasn’t any Italian in this final. Usually we see at least one, but not this time. This time we saw there three Scandinavians and it has not happened very often.

The conditions were difficult while it was raining and also blowing all the time during the final. But it suited to Danish Jesper Hansen. He made some mistakes, but they came in such moments that they didn’t disturb his possibilities for victory.

The beginning of the final was difficult for Hansen, he missed the first clay and then he did the same thing with eight clay but after that he did only three mistakes during the final.

“It was very windy and when it rained, it was very difficult to shoot. Anyway we have been suit for training this kind of weather too, but it is not my favourite weather at all. I’m happy at the moment and I would like continue this positive circle in Korea, in the World Championships. Of course gold medal feel good and I wish to have it also in Korea but also the quota place for Olympics is as important as the world championship medal”, thought the new Champion Jesper Hansen.