New team competition in Trap Women was a super success 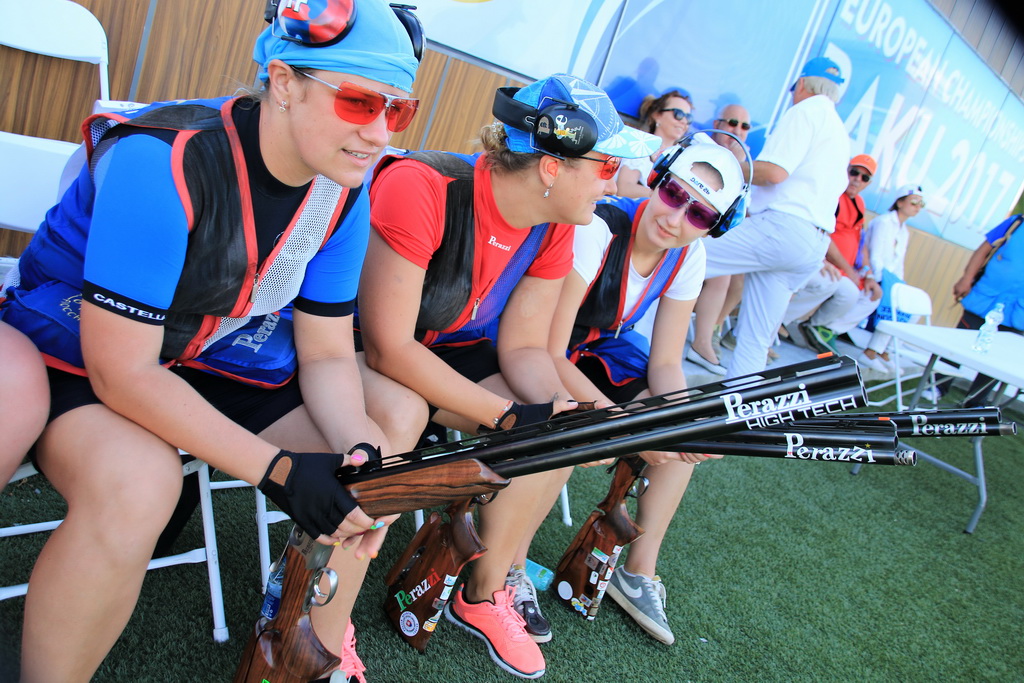 The ESC has taken seriously the IOC 2020 programme and wants to be forerunner in developing shooting sport more exciting and more attractive where the spectators and also athletes feel the real sports spirit and where they can feel the feeling of three musketeers; one for each, each for one.

ESC Presidium has a strong developing process going on and the main goals of developing the events are: more emotion and excitement, clearer and simpler rules, suitable for tv and easy to understand for spectators.

So on Wednesday evening it was seen the Premiere of the new team competition. And it was absolutely a great success if asking athletes.

The athletes compete the normal Qualification. Teams consist of three athletes. The 8 best teams when counted the hits together will have the place for Quarter semi-finals. The best team (#1) will meet the team who was the last (#8), second meet seventh etc. Then the winner teams meets in semi-finals and the winners of semi-finals go to Gold Match and the other go to bronze match. Every broken clay brings a point for the team and athletes shoot each 15 clays.

In this new team event participated seven countries. In the qualification round the best was Russian Federation, second Finland, third France, Great Britain was # 4, Italy #5, Germany #6 and Slovakia #6.

While there was only 7 teams the winner of qualification went directly to Quarter Finals, The fighting couples were following Finland - Slovakia, France – Germany, Great Britain – Italy.

In the first match Slovakia managed to surprise Finland with result of 30-28 and continued to semi-finals. At same time in other couple France surprised Germany with result 32-31. In the last couple met Great Britain and Italy. The British team fought strongly against Italy but Italy finally won with result 34-32.

In the semi-finals the lucky teams were Russia and France who beat Slovakia and Italy. So in the Bronze match would meet Slovakia – Italy and in the Gold match Russian Federation – France.

In the bronze match Slovakia won Italy 29-25. In that match was seen the exciting moment; I have to fight for the team if you like to manage. If somebody miss the clay, it will increase pressure for others. You have to follow also how your team mates shoot and also how the other team will manage too.

In the gold match both teams started quite nervously. For Rabaya the start was difficult, she missed her three first clays, but the she “catch the idea” and shot strongly to the end missing only two clays. The French Sauzet her destiny clays in the second 5 clays series, she missed unfortunately four clays. Anyway Russian team controlled the Gold match from the beginning and France did not have any possibility. Russia won the first ever organised New Team competition with result 33-28. The team consisted of Ekaterina Rabaya, Tatiana Barsuk and Yulia Tugolukova. The France team consisted of Marina Sazet, Delphine Reau, Melanie Couzy. The Bronze team Slovakia consisted of Zuzana REHAK STEFECEKOVA, Jana SPOTAKOVA and Nina SLAMKOVA.

“This was best what has happened in shooting sport lately. This competition is very exciting. My hearth beat more than usually and the pressure was higher. I have to support my team mates and try my best all the time so that I do not spoil my mates’ game. Super competition absolutely, even we lost”, explained Delphine Reau from French team.

The same competition will be organised in Skeet Women which will take place on 31st of July.