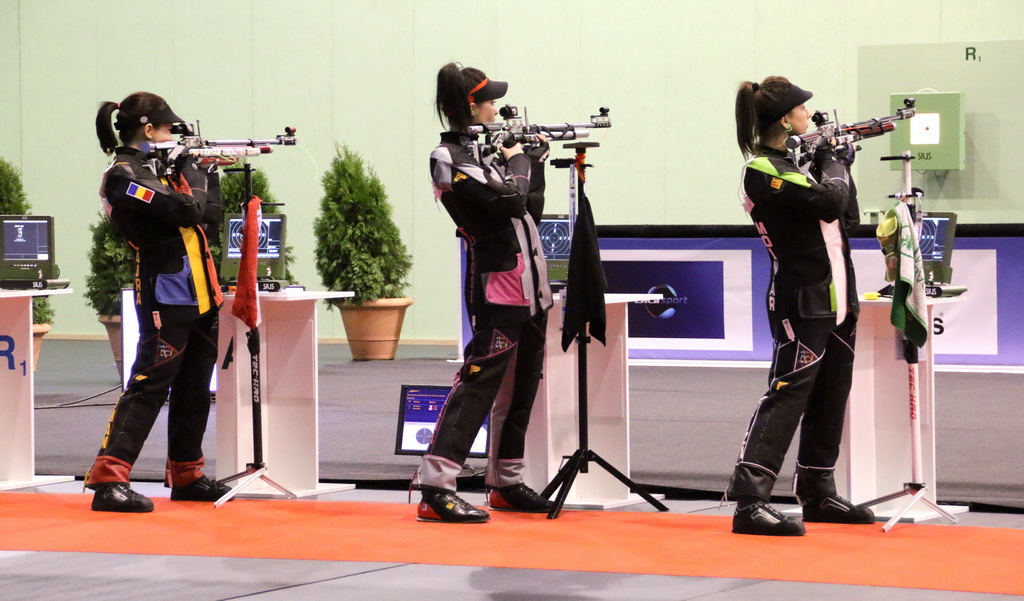 Absolutely brilliant shooting sport performance started Sunday’s rifle section Györ. Sunday was a separate team competition day and the pistol athletes competed in the morning and afternoon was the turn of Air Rifle.

Romania, Denmark, Switzerland, Ukraine were the teams who reached the place to the semifinals.

In the first pair Romania was sharper than Switzerland and continued to Gold Match with result 17-9. In the second pair Ukraine and Denmark fought from the place of Gold Match. Denmark was superior and won that match 16-2.

In bronze match met Ukraine and Switzerland. They needed 20 rounds before the bronze winner was clear. Their performance was brilliant, both teams shot only once result under 30 point. Among the rounds Switzerland had even eight rounds over 31.5 results. And with those results they lost the game. It meant that Ukraine’s performance was excellent too. After tight match Ukraine won bronze with result of 22-19.

The second rifle team competition was 10m Air Rifle Men Team. From the qualification via quarterfinals to the semifinals managed to reach a place following teams: Russian Federation, Croatia, Hungary and Serbia.

In the first semifinal Russian Team beat Croatian team clearly 17-7. In the second semifinal Croatia won the hosting country Hungary in tight semifinal with result of 16-12.

In the bronze match met Hungary and Serbia. This match was one of the shorts while Hungary needed only 13 rounds to receive 21 points. Hungary won bronze with result of 21-5 even they shot very well but Hungary was better in this time.

In Gold Match Russia has to a hard job before they could celebrate gold medal. Russia finally won with result 22-18 and it was not at all easy job for Russian Team. It was needed 20 rounds to the victory and every round was over 30 points. The highest score which both teams achieved was 32.0! The final was very high level shooting indeed. The Russian Federation team consisted of Sergey Kamenskey, Vladimir Maslennikov and Alexsander Dryagin.

The successful Championship was declared closed by the ESC Secretary General

The program of the closing ceremony consisted of speeches and high level ballet and folk dance performances.

The Secretary General Alexander Ratner declared the 10 m European Championship closed and wished to everyone safe journey back home.