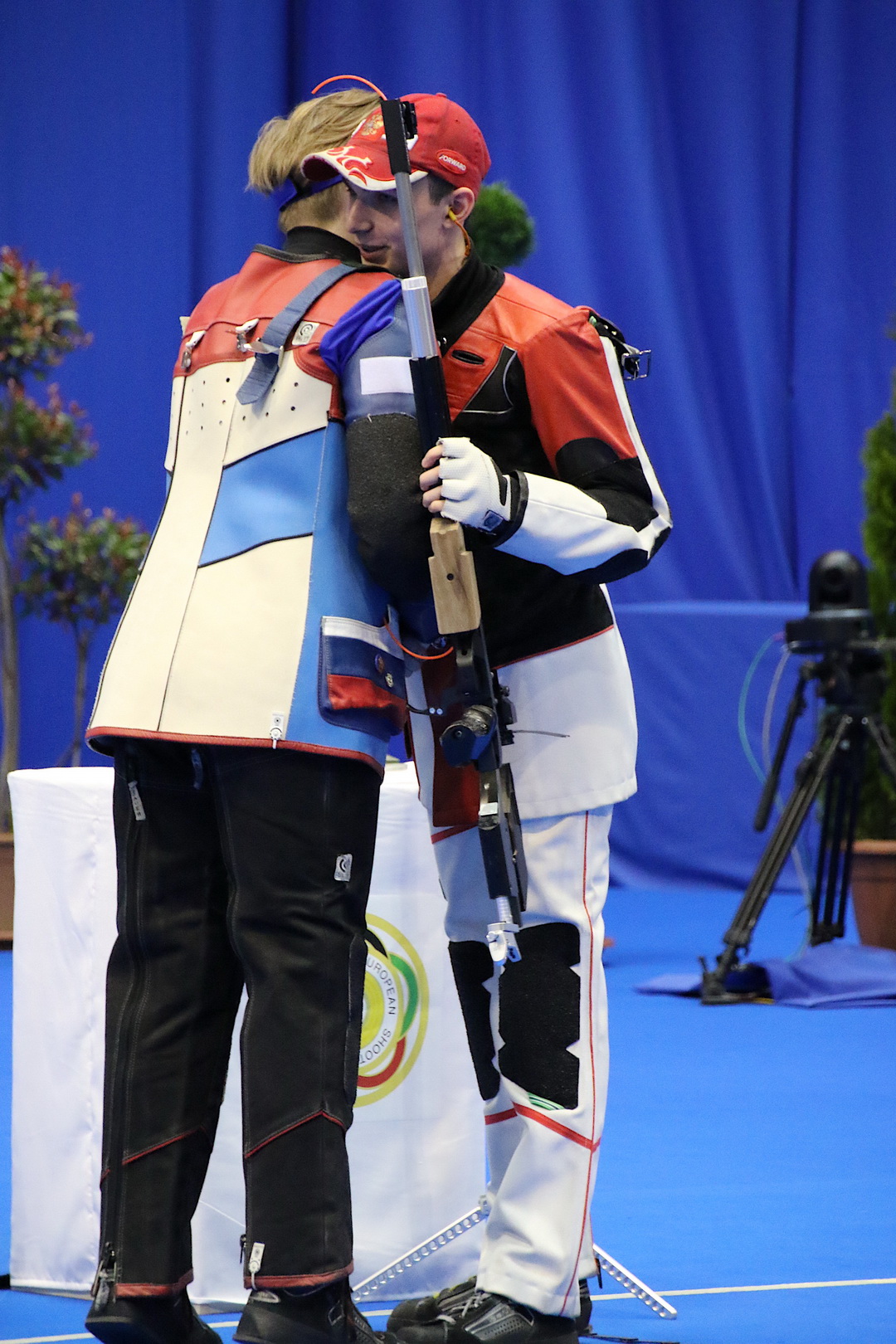 The team of the Russian Federation was superior in 10m Air Rifle Mixed Team competition. They didn´t give any possibilities to the other teams at the final. Tatiana Kharkova and Grigorii Shamakov set a new European Record Juniors and won with the difference of 6.4 points. Their golden result at the final was 500.0.

The team is a excellent couple and they push positively each other, if the other gets a little bit weak result, the other makes a perfect shot.

"We were quite good today. It is so easy to compete with Tatiana Kaharkova while she is so excellent shooter. I can trust her and it keeps me calm and I can concentrate only to do my best", Shamakov gave positive feedback and honor to his team mate.

Behind the Russian team at the coaches chair sat Alexey Savrov. He looks like film star Stallone, strong body and face with dark curly semi-long hair.

"We have worked with Grigorii long time about, three years now. Every coach has his secret methods to motivate athlete. My style is that I´ll discuss a lot with athletes. I´m sometimes had but not too hard", explained Savrov.

Beside Savrov stood too young male athletes and when I asked them about Savrov´s coaching style, they only smiled and agreed that he is not too hard, but push us training.

"Of course this also nice for the coach when athletes get success. It tells me that we, athletes and me, are on the correct way. It keeps me continuing, admit Shavrov in a small way".

The silver team was Germany 1(Anna Janssen, Maximillian Ulbrich). Denmark was third and won Norway in the shoot off. The Bronze team consisted of Mikael Hansen and Laura Stephanie Grundsoee.

We can call Krister Holmberg as The Grand Old Man of Running Target. He has participated now already 28 times since 1992. Medals of different Championships Holmberg has won several. Holmberg is 46 years young.

"The Championship smells always good. The series were in a good shape today, not like in yesterday when I was only 12th", explained Holmberg just after when he was crowned as the European Champion.

The Ukrainian Galina Avramenko was the Queen of the Running Target Mixed Women competition. The Title did not come easily while she had the shoot off with Russian Olga Stepanova. Both shot 374. Avramenko won the shoot off 19-18 and took the European Championship. Third was yesterday best Julia Eydenzon from Russian Federation with result 369.