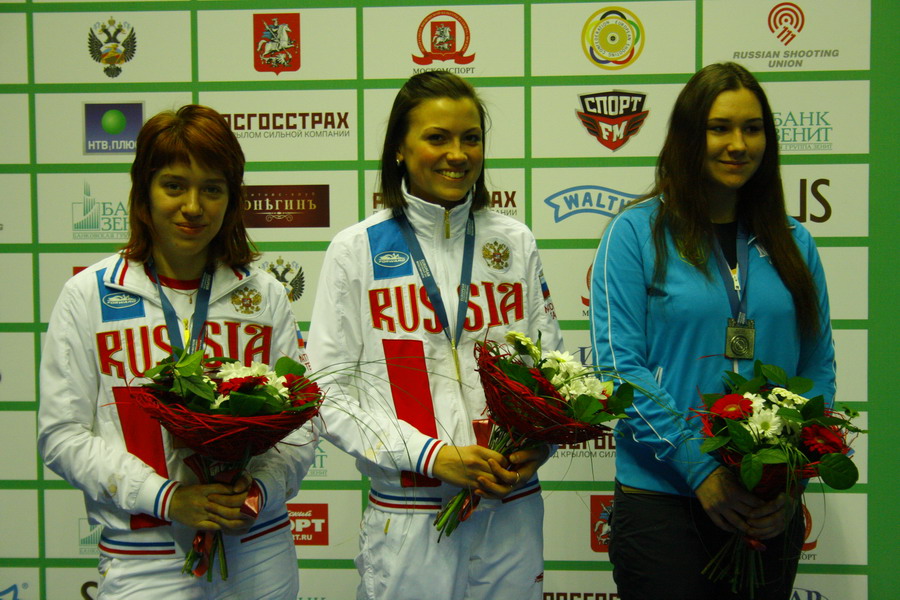 The European 10m Championship started with the Qualification of Youth Olympic Games-2014, which will take place in Nanjing, China. Europe is awarded the biggest number of the quota places for the Youth Olympic Games. 24 of them will be disputed in Moscow, six in each event and one from each country.

Russian Margarita Lomova was the first who caught the ticket to Nanjing winning the 10m Air Pistol Women Youth Competition with the result of 199,3 points. She won Ukrainian Polina Konarieva with 0,2 points.

The winner of the qualifying competition in Air Pistol shooting at a distance of 10 meters Lomova Margarita from Russia shared her impressions of victory and the organization of the European Championship .

“It is very pleasant to be in the center of general attention. Spectator’s support helps me. Great that Russia holds the European Championship. It’s nice to win at home. Everything is at a high level. They made a good shooting range in the very heart of Moscow. There was a wonderful idea to divide the final qualifying and shooting ranges . To get into the final zone is already a victory".

Polina Konariyeva: The main purpose was to get the license

The silver prize winner of qualification competitions at an Air Gun at a distance of 10 meters Polina Konariyeva from Ukraine admitted that her main purpose was to win the license.

“Certainly, it is a pity that I wasn’t first. But the main purpose was to win the license. When I understood that it’s already is in my pocket, I calmed down a little. After that I decided that it’s possible to fight for the 1st place. But as a result I became a silver prize winner. Perhaps, psychologically I was less strong, than the winner Margarita Lomova”.

Istvan Peni: I was the first who heard the anthem in the my honor

The Hungarian shooter Istvan Peni who won qualification competitions on 10m Rifle Men Youth, admitted that it’s his first achievement of such level.

"The victory was given me not so easy. Rivals were really strong, and it was heavy to shoot. After today's success the Federation will wait from me a victory on Championship. I´m so happy after hard training. I have trained a year very hard only for this. It is wonderful to receive a quota place Youth Olympics. This Championship is well organized. I like how a final shooting gallery was issued and how the opening ceremony was carried out ".