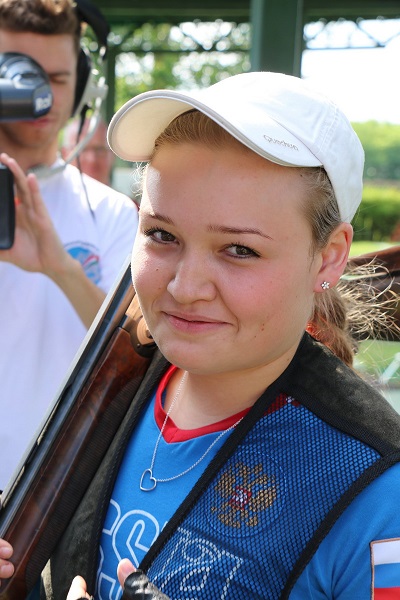 Shooting sport became now more exciting with Cup finals. You have to shoot well at qualifications while you have to reach the place for Finals. Then in the finals you have shoot as good as possible again to reach the medal matches and after that again new matches for medals. So you have three competitions in one competition.

An athlete who wants to win must be in the best condition during the whole day and as best as possible in the finals. Today Turkish Serdag Kandira and Alessia Iezzi from Italy and Yulia Tugolukova were the best in qualification with result of 70 targets.

In sunny Sarlóspuszta after the semi-finals the order was different as in the qualification. Ekaterina Subbotina (RUS) who was fifth in Qualification with result 67, became the best in semi-finals and took the place to gold match with the result of 12. The second was her team mate Yulia Tugolukova – just one clay behind. To the bronze match competed Italian Alessia and Serdag Kandira, both hit 9 targets.

In the gold match Ekaterina Subbotina started nervously; first missed (failed), then hit and after that missed (failed). Tugolukova hit 8 first targets. After nervous start Subbotina concentrated and shot a perfect match without any failings. When Tugolukova missed the ninth and eleventh target plus the last one, the game was over. Subbotina won gold with the result 13-12.

“I was so nervous. This was my first European Championship, it is a big competition, and my win here is so exciting. I wish to go to the World Championship in Granada and try to do my best there. I can’t say who is the winner”, described her feelings Ekaterina Subbotina after the competition.