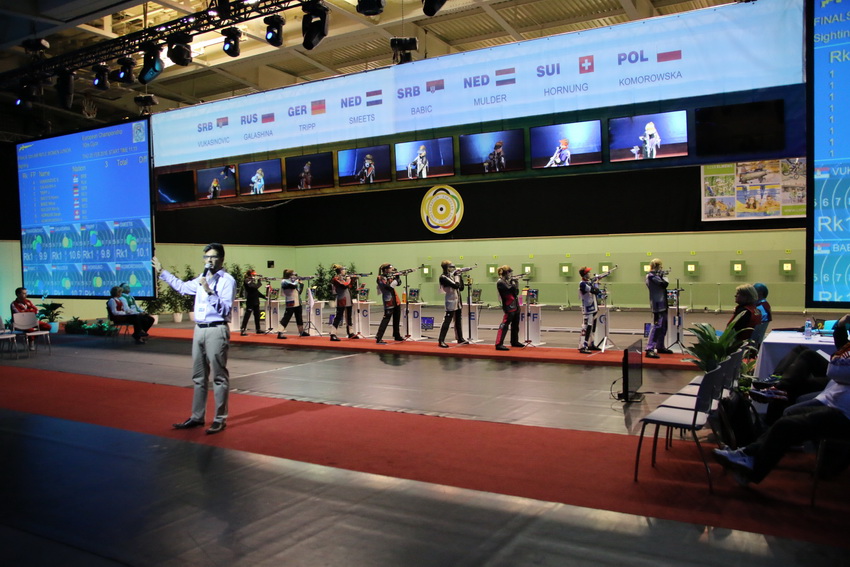 It was the first time when the 10m Air Pistol and Rifle Mixed Team Events completed the official program of the European Championships.

In Air Pistol 24 teams participated in the competitions. From the semi-finals to the Bronze Match have qualified the teams of the Russian Federation and of the Czech Republic. The Match was tight and finally the team of the Czech Republic managed to have the last needed point and won bronze with result 5-4.

Teams of Serbia and Ukraine have qualified to the Gold Match. Ukraine ruled the three first shot and was leading already 3-0. For the winning was needed 5 points. So Ukraine needed two more points. The Team Serbia woke up and won next four shots and passed Ukrainian Team (UKR 3-4 SRB). The 8th shot was won by Ukraine and the situation was even 4-4. Next shot would be the last shot. Ukrainian athletes shot 8.9 and 9.9 and after a few second later Serbians shot 10 and 9.3. Team Serbia won gold and the first European Championship. The Team Serbia consisted of Zorina Arunovic and Damir Mikic. Ukraine won silver and Czech Republic won bronze.

The second gold for Serbia from the Mixed teams competition.

The last event was of the European Championship 2016 was the Air Rifle Mixed Teams. Athletes looked to like this new event while there were already twenty teams in both events (pistol/rifle) and for spectators it brings new elements and the situations will change nearly after every shot. Both athletes must success from the beginning if you want to win.

Into the eight best team of Air Rifle had qualified following teams: Hungary, Germany, Ukraine, Serbia, Croatia, Finland, Russian Federation and Slovenia. These eight teams had been shared into the two semi-finals group. From the first group Serbia managed best and continued to gold match and to the bronze match Germany. From the second group best succeeded team was Russian team who continued to the Gold Match to compete with Serbia for the Gold and Croatia for Bronze Match where they faced Germany.

In the Gold Match the situations changed all the time, After ninth shot the situation was even 4-4. The European Championship will be clear after the next shots. Russians shot 9.6 and 9.7 and after a while Serbian 9.6 and 10.4. Serbia won the Air Rifle Mixed Teams European Championship with result 5-4. The Team Serbia consisted of Andrea Arsovic and Millutin Stefanovic.

The last day started with the 10m Air Pistol Women Qualification Competition. And what kind of qualification!!! As we know there can be only eight best in the finals. Now the limit result was 380. There were already five athletes who had shot over 380 and still six shooter who shot 380! Wow, exciting start for the day and for the final!

The same fireworks continued also in the final. Among the finalists there were five athletes belonging to the seven best athletes in the world ranking. When the qualification was already amazing so was the final too.

It looked in the beginning that this will be the triumph of Zorana Arunovic while she took the leading position after seventh shot and stayed there even until to the 15th shot. Then the defending European Champion started to show, who is the hostess of the house. In the 15th shot Kostevyc shot 10,8 and arose to the second position just 0.5 points after Arunovic.

Shot 16: Arunovic get a little bit nervous and shoot 9.3, Kostevyc to the top but only with 0.4difference. Bulgerian Antoaneta Boneta passed also Arunovic at the 17th shot and that meant that Arunovic won Bronze. Boneva couldn’t pass any more, so the rest was triumph of Kostevyc. The final finished with an excellent way, while the two best shot 10.4 in the last shot.

Olena Kostevyc (UKR) was the second defending Champion who had renewed the title. Her result was 200.9. The silver medalist Antoaneta Boneta (BUL) shot 199.0 and the bronze medalist Arunovic (SRB) won her medal with result 177.8.

In the team competition team of Russian Federation was the best with result of 1136 and they beat Team Serbia (1135) with only one point. The Russian Federation team consisted of Vitlaine Batsarashina (380), Liubov Yaskevich (379) and Olga Kousnetsova (377). The Serbians won the silver before Hungarian team with one point too.

The European Championship of the Running Target Mixed Men Junior won Norwegian Teppendalen Espen Norsveen before Ukrainian Ihor Kizyma (UKR) and Iaroslav Klepikov (RUS). That was a refreshing surprise. The result of Norsveen was 380 and beat Kizyama (379) with one point. Klepikov’s bronze medal result was 373.

In the team competition the team of Ukraine won gold with the difference of eight points before Russian Federation. The golden result was 1116 and the Ukrainian team consisted of Ihor Kizyama (379) Maksym Babushok (372) and Dmytro Melnyk (365). The Bronze medal winner team was Armenia.

In the Running Target Mixed Women Hungarian Veronika Major won her second gold by beating Armenian Lillit Mkrtchyan with a difference of seven points. The golden result was 373 and silver result 366. The bronze medal winner was Yuliya Tymoshko (UKR) with result of 364.

In the team competition Ukraine was the sharpest with team Yuliya Tymoshko (364), Viktoriia Stetsiura (349) and Darya Rozhniatovska (348). The golden team result was 1061. The silver medal team Russian Federation lost Ukraine with eight point (1053). The bronze medal stayed in Hungary (975).

Kamensky is the new king of 10m Air Rifle Men

Men’s 10m Air Rifle was one of the most interesting competition in Györ while there was also the 3 last Olympic quotas to be taken. The eight best athletes who qualified into the final were: Sergey Kamensky (RUS), Petar Gorsa (CRO ), Illia Charheika (BLR), Vladimir Maslennikov (RUS), Gernot Rumpler (AUT), Ole Magnus Bakken (NOR), Vitali Bubnovich (BLR) and Julian Justus (GER).

The situation with quotas and the finalists was such that only Norway (Ole Magnus Bakken) and Germany (Julian Justus) did not have yet quota places filled. The other athletes had already won a quota them self or some other from their country filled the places. So that was relaxing information for Bakken and Justus. The third and last quota travelled to the Jorge Diaz (ESP) from the 11th place from the Qualification.

Anyway the men 10m final was attractive sport entertainment. It was quite tight between Sergey Kamensky (RUS) and Illia Charheika and Peter Gorsa. Kamensky ruled but just behind him followed very near these athletes and the diffence was big. During the finals there were seen many top results (10.-10.8). Sergey Kamensky was in some way superior, if there was need better results, he did it. The most dramatic moment felt during the 17th shot. Croatian Gorsa had climbed up to the second place and was only 0.8 behind Kamensky, but his shot hit result 3.7 and he lost his possibilities and won bronze. The battle of gold was triumph of Sergey Kamensky (RUS) who won the European title with result 207.2. When Gorsa had dropped down the silver medal winner was Belarushian Illia Charheika (206.4), the difference for gold 0.8 points.

The team competition of the Air Rifle Men was triumph of Russian Federation (1875.7) who won the European Championship. The team consisted of Sergey Kamensky (627.8) Vladimir Maslennikov and Nazar Louginets (620.8). Silver medal winner was Belarus (1872.9) and bronze travelled to Austria (1871.2).